Traveling with 3 generations has been fun so far and after our first week in Luang Prabang, we found our travel groove.  Next it was time to move a little further south in Laos and head to the small town of Vang Vieng.  I wasn’t too sure about this part of the planned journey, as I had read mixed things about Vang Vieng and getting there.  This is our journey on the VIP bus from Luang Prabang to Van Vieng Laos. 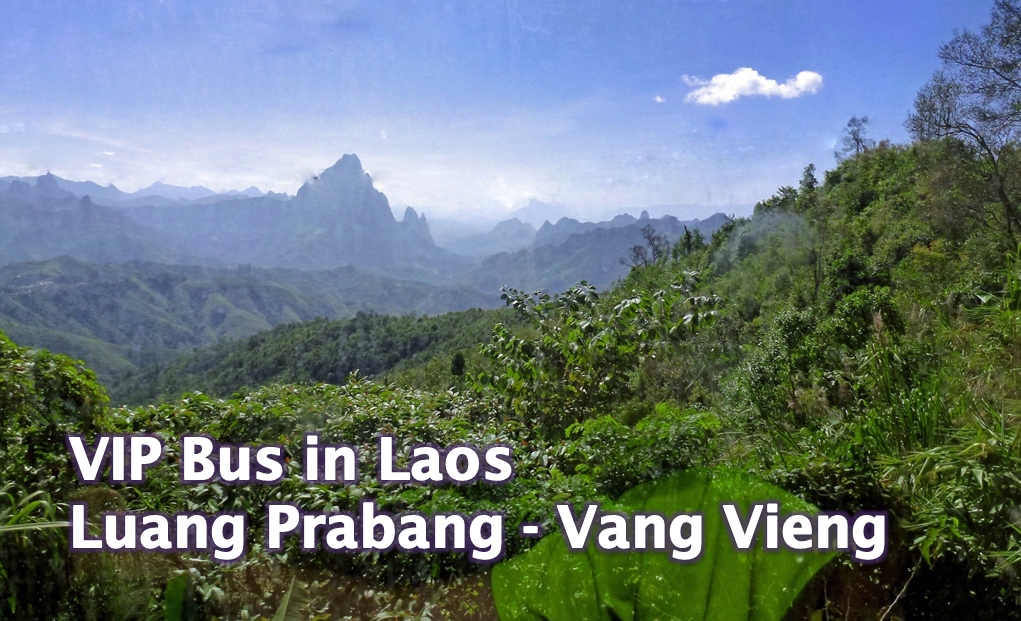 Vang Vieng is a very well-known backpackers stop and until 2012, it was a huge party spot.  I wasn’t sure if it had really lightened up, or if it was still the same as the good old days of eternal Spring Break!  We decided to check it out and our transportation of choice, really the only choice, was the VIP bus from Luang Prabang to Vang Vieng.  This was a scheduled 6-hour journey through the mountains of northern Laos and promised to have stunning views.

What is a VIP Bus?

Now VIP sounds pretty posh right?  What does the VIP mean anyway?  You would think it stands for Very Important Person or something along those lines. 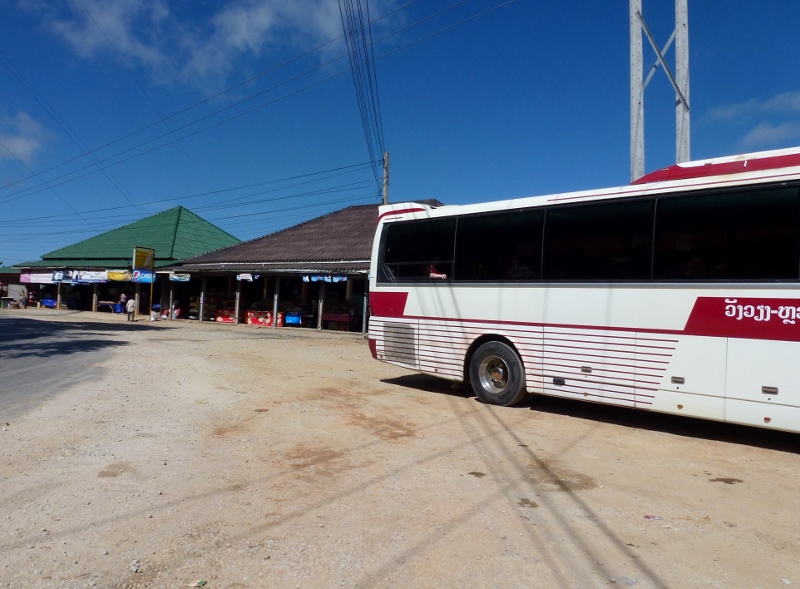 When you are talking bus trips in Southeast Asia, it is more than likely just an AC bus and a way to entice tourists to book it.  That said, it is nicer than a local non-AC bus and it did include one bottle of water and a meal voucher for one of our rest stops.  It also included AC vents stuffed with tissues, to prevent it from dripping on you.  For me personally on this leg of the trip, I would say VIP means Vomit Inducing Probability. 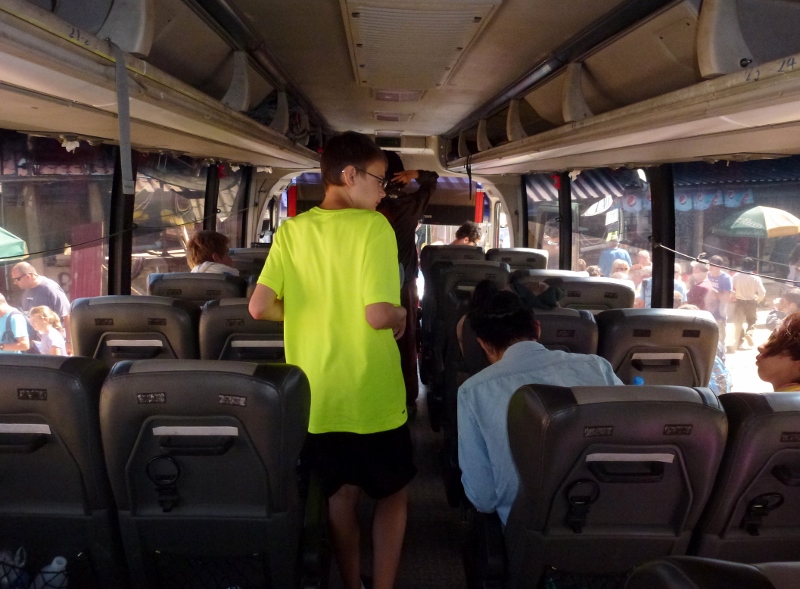 We started off the morning with a tuk tuk picking us up at our guest house.  He transported us to the bus station and we loaded up on the big AC bus.  Our seats were pre-assigned, so there wasn’t a mad dash to get seats together or in a particular location on the bus.  Of course with 5 of us traveling and only 4 seats across on the bus, there was an odd man out.

Tip:  When booking seats, try to avoid the back.  We were in seats 26-30 and there were a few rows behind us.  The further back you went, the less leg room was available.  This was to accommodate the non-functioning bathroom on board the bus.  The seats just two rows behind us, barely had room for an adult leg to fit.  Not an adult, but an adult leg.  That said, they did pick up some locals along the way to fill those seats.  Yep, 2 adults and 2 children. 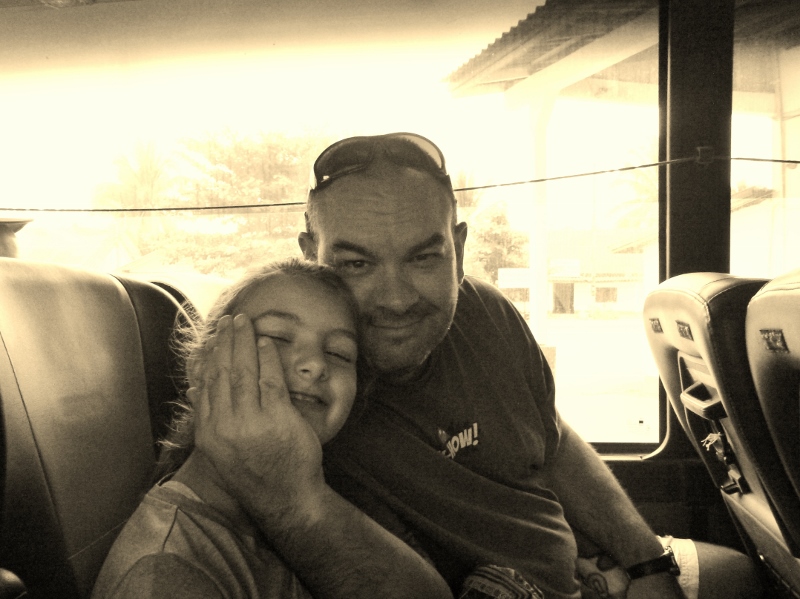 Gma Bev, Alan and Lars prefer the window seats and Anya and I prefer the aisle.  Gma Bev sat in front of Alan (big mistake, watch the video) and Anya beside him.  Lars and I had the right side of the bus, which I wasn’t too thrilled with.  I didn’t want to be on the “cliff” side of the bus, but figured since I was in the aisle it wouldn’t be too bad.  Lars and I also get car sick, so I figured it would be best if we stuck together.  We loaded up on our little anti-nausea pills and off we went on our bus journey.

Within minutes, I knew it was going to be an interesting and long experience.  When traveling on mountain roads,  I expected the twists and turns that come along with the winding roads.  What I didn’t expect were the swerves, bobs and weaves along with some rocking, while avoiding potholes and oncoming traffic.

Oh, I should have taken that pill sooner!  We blasted the AC right in our faces and eventually the medicine kicked in.  The nausea was gone, but we were still left with the roller coaster ride.  It really reminded me of the Simpsons Virtual Reality ride at Universal in Florida.

We did stop in a small town and pick up one extra VIP passenger.  This one was a cutie!  A VIP puppy in a box.  The driver was going to load him under the bus with the luggage!  There were plenty of people to direct him otherwise and the puppy rode up front, near the driver.  He rode with us the entire way and was dropped off at a home along the main road, just 20 minutes outside of Vang Vieng.  Some very excited children were the recipients. 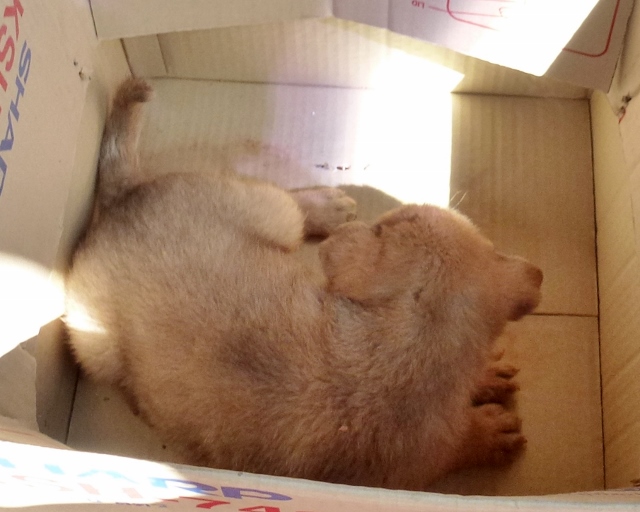 As promised the views and scenery was stunning.  I don’t think I have ever seen views so lovely from a bus.  As far as the eye could see, there were beautiful mountains covered in green jungle with little spots of red dirt now and again.  From afar I wondered what this was and we soon found out. 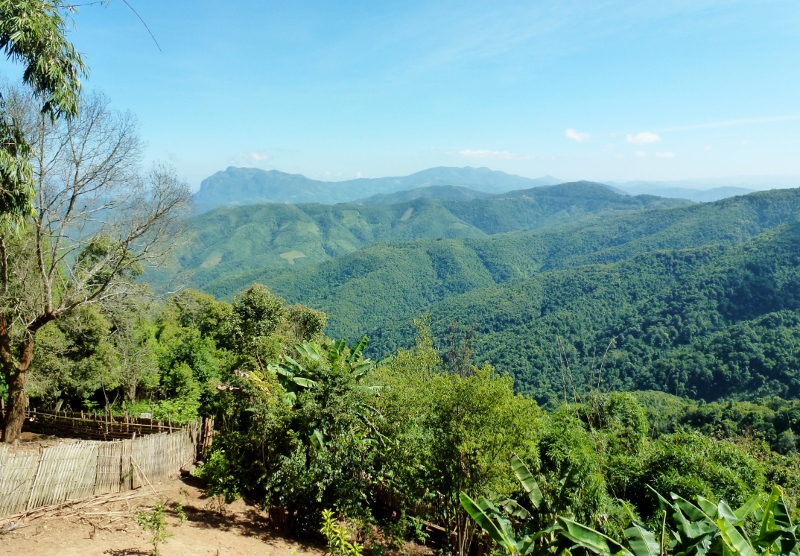 As the road weaved around each turn and we made it over towards those red spots, it turned out to be remnants of a landslide.  We passed several of these along the road and I didn’t think anything of it.  Then we came to a slow crawl and then a stop.  What was going on?

I couldn’t see what was up ahead as the road turned and it was just out of view.  Then we slowly crept forward and I now could see the road was being cleared with bulldozers.

I am not sure when this happened, but it had to be that morning.  They were clearing the road for traffic to pass.  They only had one lane open and it was closest to the edge of the cliff!   We got the birds-eye view of the landslide and the cliff.  Just look and see what we went through and how close we were to the edge. 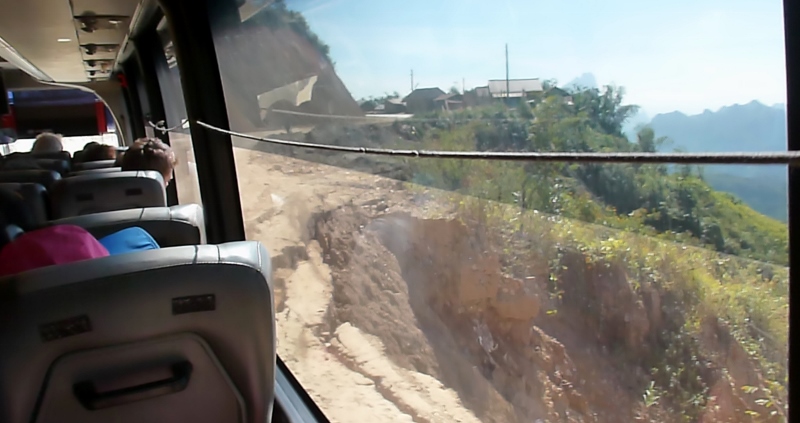 Watch the video to see the landslide (s) we experienced.

As we pass this, I realize Alan, Anya and Gma Bev have no clue how close we were to the edge.  My mind began to race and all I could think about were landslides.  For the next hour or so a zillion landslide thoughts were racing through my mind.

What if the land gives as this heavy bus passes over?

Why were there so many landslides today?

Is this an everyday thing?  It must be, as they had bulldozers at the ready.  This must be as common as a snow plow in the North.

Do any cars or buses get hit with the random landslide?

Are there any fatalities?  So many people travel this path everyday and I have not heard or read about deaths or any shocking stories, so what’s the deal?

What are we doing? Is this safe?

I finally got my mind back on track to stop thinking about all of these landslides, just when we came to another slow crawl and then stop.  This time, there were the cutest local kids alongside the road that were a great distraction.  What the heck were they doing playing along the main road? 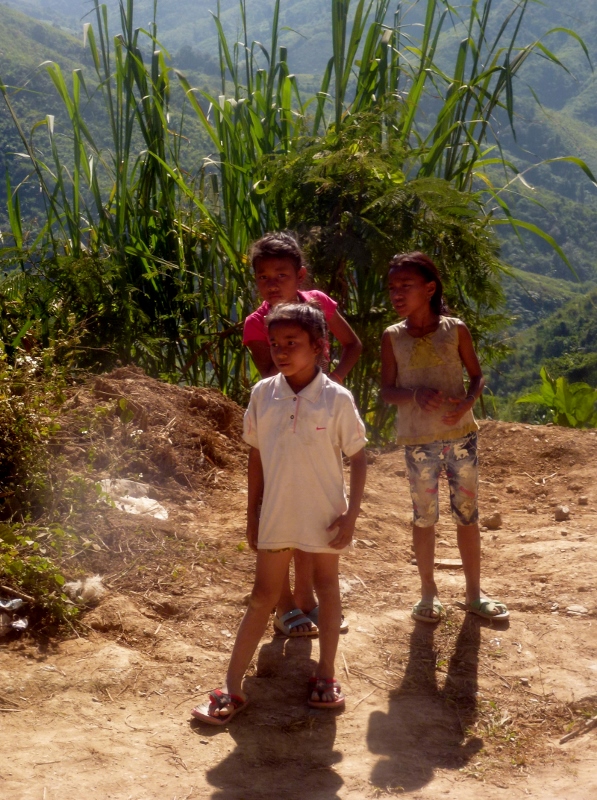 Again, it was another landslide, but this one was even more recent, as no lanes were open!  These kids must belong to the workers clearing the road.  We waited about 30 minutes and finally it was time to creep and crawl through it, on our big bus.  It was like we were on an off-road expedition, as the bus bumped and bobbed over the dirt.  Sometimes we just had to close our eyes and hope for the best.  At least this time I wasn’t on the cliff side!  It’s in the video too!

In the end, our 6 hour journey became 7 1/2 hours.  We stopped a couple of times for a meal break and toilets. 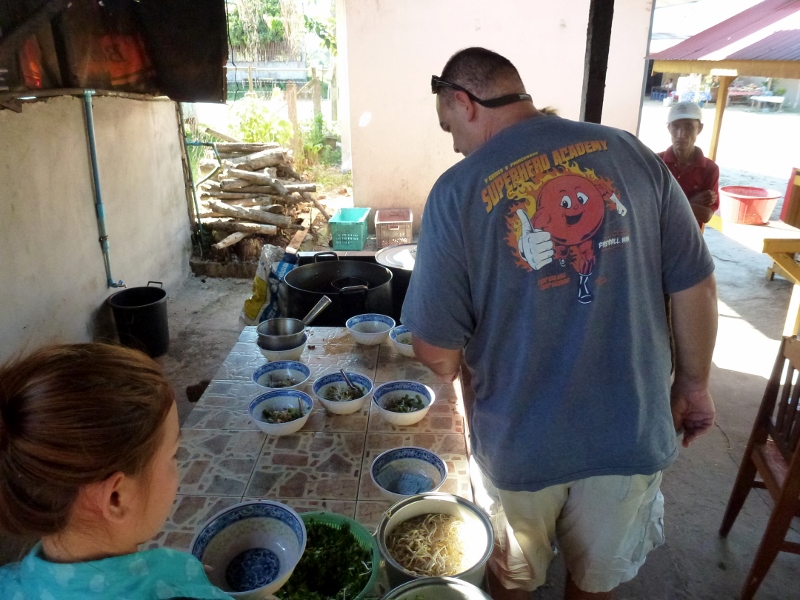 It really was pleasant and beautiful, but my mind got the better of me most of the time.  That first landslide really was close.  Tell us what you think.  Would you take this bus journey?  Have you already taken this journey?  Let us know below.

We made it!  Hello Vang Vieng! 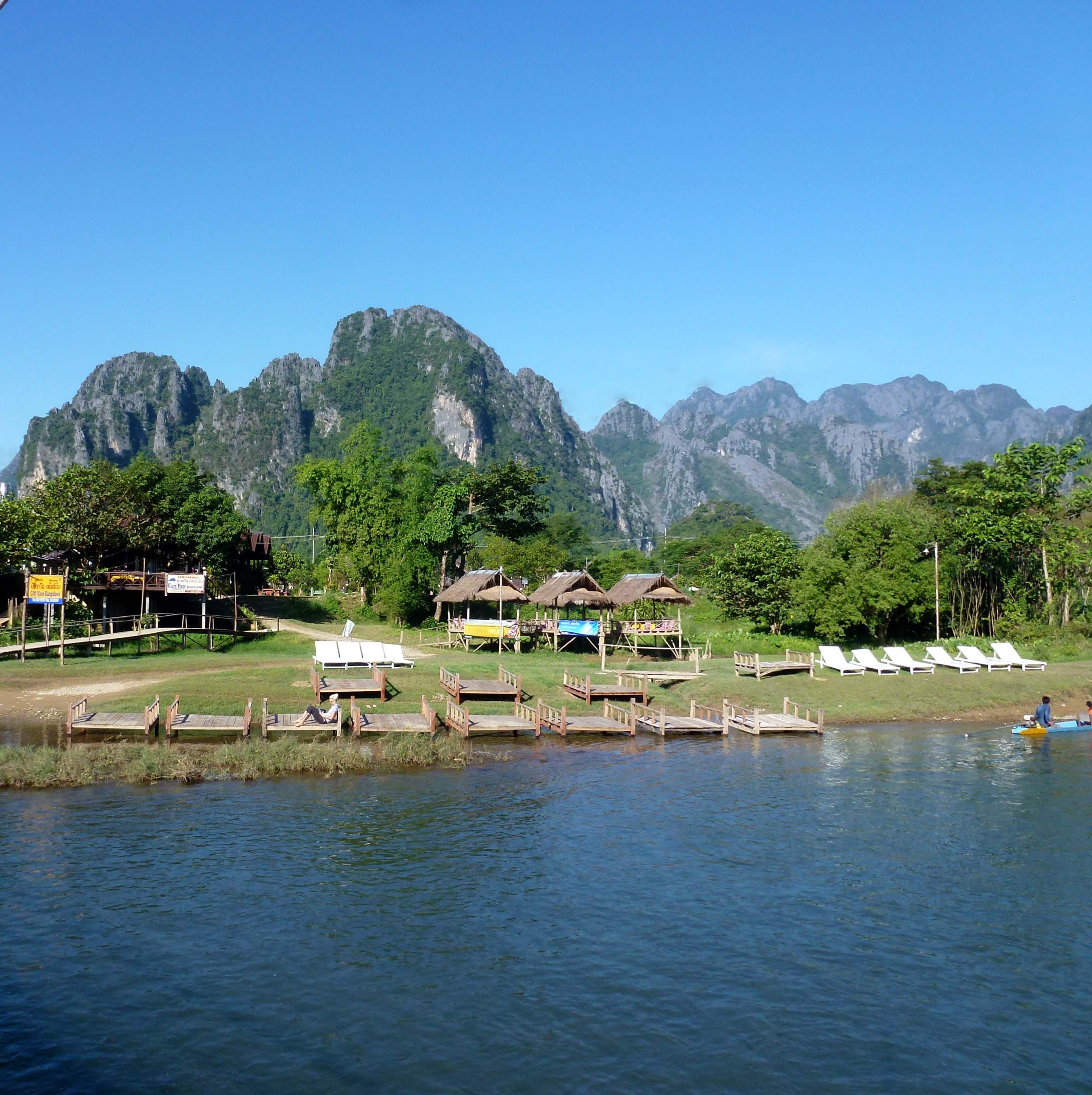 10 thoughts on “On The Edge! VIP Bus From Luang Prabang to Vang Vieng”