We are making great progress.  Better than I expected.  A month before we left the U.S. for Spain, I met with a colleague who had taken his family to Spain a few years earlier. Actually, what happened is that whenever I told someone at work what we were planning, they would invariably ask me, “Oh, do you know Alec? He did the same thing…” 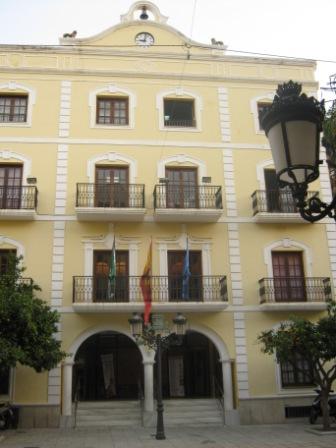 After hearing this over and over, I finally decided that I should meet the guy and see if Heidi and I could pick his brain.  I sent him an e-mail, and he was excited about what we had planned, and invited the entire Wagoner clan over to his place.

Alec and his wife were very helpful.  They gave us a bunch of useful information, and set our expectations about getting things done in Spain.  He was careful to point out that when dealing with any sort of government agency/worker.  His kids talked to our kids as well, and explained some things (they also played a lot).

Do you know how slow things can move in the U.S.? Well, the molasses is even thicker in Spain. “It’s just the way things are done.” is the common mantra that I’ve heard, and uttered. No use getting upset, just accept and move on.

As Alec explained, when moving to Spain to become residents, there’s a bit of chicken and egg.  You need to get registered with the state (Comision de Policia or Brigada de Policia) to get an NIE card.  This establishes you as a legal resident.

But in order to do this, you need a place to live.  As in the U.S., where you live generally determines where your kids will go to school.  You want them to go to a good school right? So you try to find out where the good schools are, determine the availability, and find a good neighborhood.  So you find a good school, but you need a house.  And so on, and so on.

Since we are in a small town, the number of schools was limited.  We also missed out on school selection which happened in May, so once we stopped worrying about the school aspect of the “vicious triangle”, we could focus on finding a residence, and then letting the school system tell us which school the kids would go.

Registering with the Authorities

We’ve got the long-term rental thing almost complete (more about this in an upcoming post), we have a contract and an address to provide the Police. Today while we were out and about, we had some official pictures taken of all of us to submit with our applications. We’ll use them when submitting paperwork to register the kids in school as well. With all of our paperwork we went to get registered!

Heidi and I were very happy when we found out we needed to go to Motril to register (vs. Granada), because Motril is 20 minutes away versus 60 minutes for Granada.  Once we found parking (always a bit of a challenge), we go to the Comision de Policia.  Once we go through the obligatory metal detector, and get our number (#43), we go into a room that is not as packed as I thought (whew!).

We wait about 15 minutes, and while we’re waiting, I see a couple of workers assisting people. One is an older woman who is helping a family of four (from San Diego). She seems very frustrated, and as I understand her questions, and the father’s answers, they don’t have much in the way of the required paperwork. She looks very agitated, and I am soooo hoping that we don’t get her.

Eventually we hear, “Cuarenta tres”.  That’s 43 for all you Gringos out there! And who do we get?

The other guy!  Nice.

Side Note 1:  One of the biggest issues we’ve been dealing with so far is the language barrier.  Heidi is better at Spanish than I, but between the both of us, we’re doing a pretty good job of communicating.  So the gentleman who helps us, starts asking for documents.  We hand him our stack of visas, documents, and pictures.

Luckily, the helpful lady at the Spanish Embassy had organized the documents in a way that facilitated things nicely.  A few questions where asked and answered, and I was given yet another document to fill out.  There was some confusion on my part about what the various words were, but it eventually got filled out, and I signed my name.  He took my fingerprint, and it was on to Heidi’s paperwork and fingerprint.  Then it was our sons’ turn, and he was a bit tentative on signing his name in cursive, and then he had his fingerprint done. Our daughter was next, and she printed her name with some curvy letters here and there, and had her print done.  I’m hoping they never have to have their fingerprint(s) done again if you know what I mean.)   🙂

He told us (in Spanish — I say that because it’s important) that he would submit my paperwork, since I was the “primary” resident, and in 4 weeks, I would get my official card.  We would all come back, and then Heidi and the kids’ paperwork would be submitted, and their cards would arrive in 8 or so weeks (mas o menos).  At that point, he gave us our paperwork back, and explained what he needed next from us:

Oh, and if we wanted to get our temporary cards today, we would need to do all of the above in less than 90 minutes.  So the clock starts ticking. It wasn’t urgent that we get it done today, but we are trying to get as much done as possible.  We debate whether Heidi should take the kids, and go to the bank while I go to a shop next door, and get copies.

Ultimately, we decided to stick together.  That way, Heidi wouldn’t have to deal with parking.  So into the car we pile, and go looking for a bank.  And looking.  After a bit we see a bank, so Heidi jumps out of the car and runs in.  I am driving in the city center, go down the road a bit, go to a roundabout, and then loop back.  After a few times doing this, we see Heidi, and she indicates that the first bank wouldn’t take the payment, so she went on a search for another bank, so I started my roundabout looping again.  Finally we see her, and then it’s off to the copy store.

Once we get there, I hop out, and Heidi takes the kids to get some food while I sort out all of the copying.  Can you hear that clock ticking in the background?  The copying wasn’t hard, but I had to explain to the person doing the copying that some of the documents could not be pulled apart, since they were attached to the Apostille.  Twenty or so minutes later, and €1.30 poorer, I went back to the Police Station.  Time check: 13:49

Close But No Cigar

Once I get there, the security guard is reluctant to let me in because they close at 14:00. It’s 13:50 now, so I don’t know why there is a problem.  He tells me to come back on Monday, and I explain that the guy who was assisting us told me to come back today.  He relents, and lets me in.  I go in, and I see our Helpful Government Employee.  He beckons me over, and goes over my paperwork.  He sees we paid the money, staples all of my documents, and puts them on top of a rather large stack of papers.

He then proceeds to go through Heidi’s paperwork.  He looks for the payment to the bank, and doesn’t see it.  He looks through the kids’ paperwork looking for the same thing, and then it happened.  He gave me the look.

Side Note 2: It’s amazing how much one can convey with raised raised eyebrows, and both hands spread out and facing up.  This must be the international sign of “Where is it?”

What he was saying was, “Where are the receipts, Dude?”

Remember when I said earlier that he told us in Spanish?  Well, he told us, I’m sure, but since our master of the Spanish language is not real strong, we mis-interpreted what he said.

The good news is that I’m legal baby! While the official resident card will look like a driver’s license with my fingerprint, here’s what the temporary one looks like: 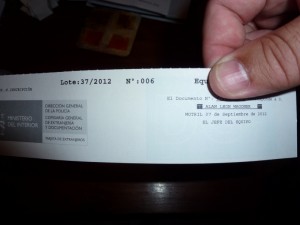 Pretty cool, huh?  Like I said earlier, things are going well for us.  I was really worried about dealing with a government bureaucrat, standing in several wrong lines, and having to make several long-distance trips, but this has been fairly painless.