To our surprise, this was far more than just a river cruise.  We also learned a great deal about the history and traditions of Chiang Mai, as well as a little about nature.  We would like to thank Scorpion Tailed River Cruise for hosting us and all opinions within are our own. 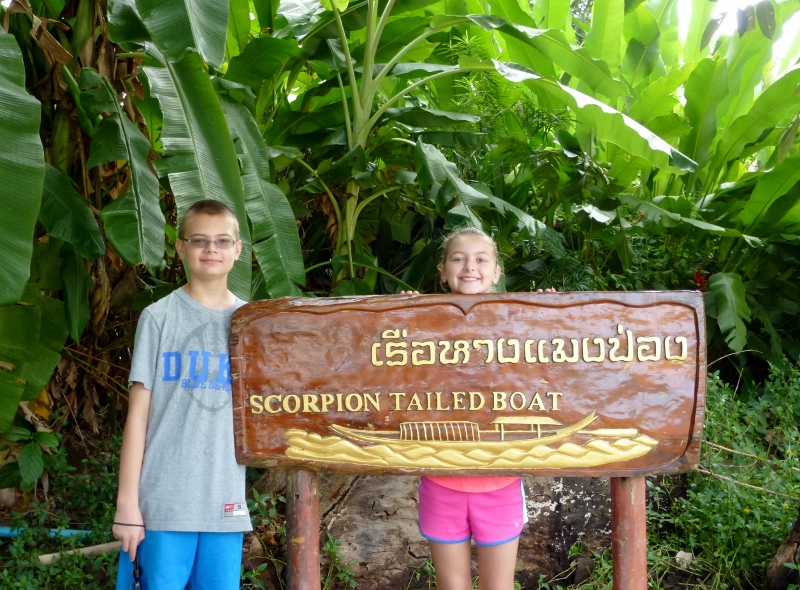 Being in Northern Thailand is great for those of us that love adventure and nature.  Even though Chiang Mai is a fairly big city, it doesn’t feel like it.  Most buildings are quite low and each neighborhood is so quaint and inviting.  Slightly to the west of the city we have a gorgeous view of Doi Suthep.

A mountain covered with lush tropical foliage, waterfalls and a beautiful Wat sits atop. Along the east side of the city, we have the Ping River.  Of course the Wagoners are water people, so we just had to find a cool activity along the river.

After a little research, we discovered the Scorpion Tailed River Cruise.  It looked perfect for a morning out for the family.  They promised to offer a 90 minute river cruise, with history and culture mixed in.  Perfect!  We will get a little homeschool mixed in the day as well! 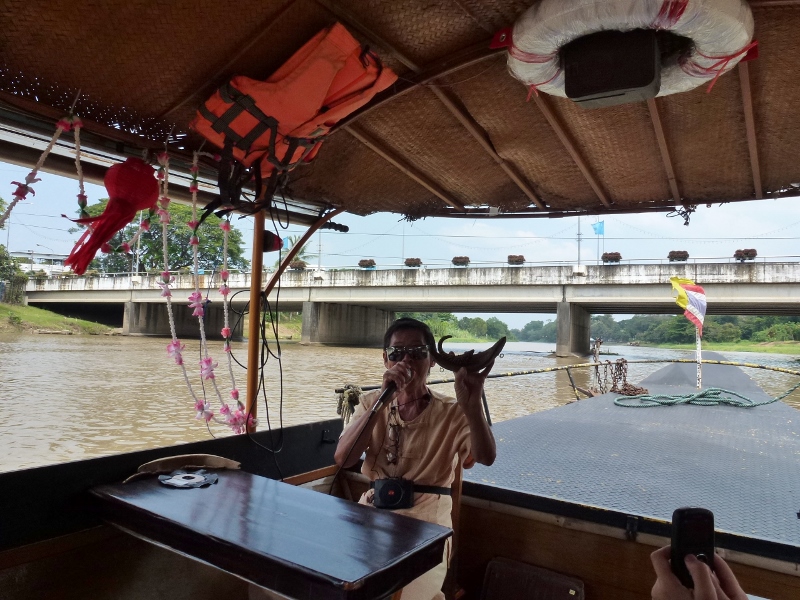 Our Journey to the River Cruise

We booked the 11 am river cruise, but we weren’t sure how long it would take us to get there.  It was just across town on the north-east corner, so we would take a songthaew there.  We had the map from the Scorpion Tailed River Cruise website, and it was also written in Thai, so we knew we would be able to get there.

It was 10 am and the sky was blue, so we knew we would have a good day.  Just outside our place, we flagged down a songthaew and showed the handy-dandy map on our smart phone.  The driver gave a thumbs up and we all hopped in the back.  Ah, finally we don’t have to try to explain where we want to go!

There was one other person in the Songthaew, so we figured he would be dropped off first.  That is one thing about the songthaew, you never know where you will venture when picking up and dropping off other people.  It is rare that you go directly to your destination.  We knew we had an hour and were looking forward to the adventure.

About 10 minutes later the songthaew stopped and let the other passenger off.  The driver then hopped in the back with us holding a laminated paper showing tours around town.  He questioned our choice of the Scorpion Tailed River Cruise and insisted it was no good.  He was wanted to take us to a different river cruise in town.  We kept saying that we have already booked this river cruise and wanted to continue to our destination.

Finally he let up with the sales pitch and went back to drive us to our destination. We were a bit worried and everything was spinning through my head,  “Did we pick a terrible river cruise?  What if he doesn’t take us where we want to go?  Oh what kind of day is this going to be?”

Just 5 minutes later, we arrived safe and sound at the Scorpion Tailed River Cruise.  We were there about 30 minutes early, but that was fine because we were also planning to meet up with some new friends (One Modern Couple).

Waiting for the cruise to begin

We had fun waiting for the cruise to begin and walked along the river and watch people fishing.  Across the river was the municipal market, so it was fun to watch the buzz around that area, as people took care of their daily errands.  In the lobby of the tour office, we noticed photos of a cool hand-carved sign and decided to seek it out.  We looked for it while out on our walk, but never did find it. 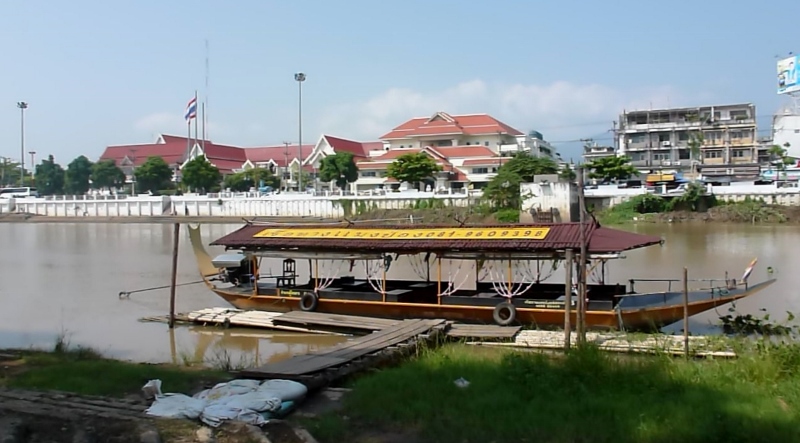 Then our friends arrived from One Modern Couple, Carolann and Macrae.  We hit it off right away and it was just like visiting with family.  After about 10 minutes of non-stop chit-chat it was time to set sail.  We were so excited that we were going to have a private cruise with just the 6 of us.  We all loaded up on the very cool boat and off we went. 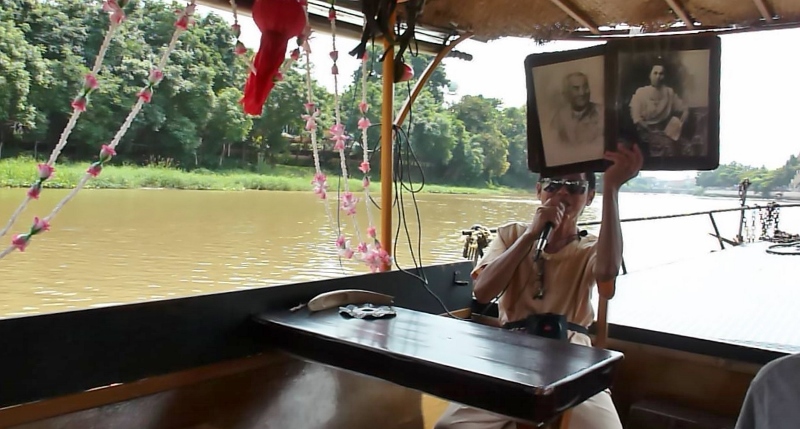 Our English-speaking guide was full of interesting information, as we made our way down the river.  There was such a mix of sights along the river with hotels, enormous homes, some high-rise buildings, as well as some modest homes that have stood the test of time.  It was great to see the locals out fishing and just enjoy the peaceful ride.

We passed one building that was a hotel and our guide informed us of the big flood a couple of years ago.  The river water level raised so high that the first floor of the hotel was under water.  In the photo below, you can see the white umbrellas.  That is where the water was!  Crazy. 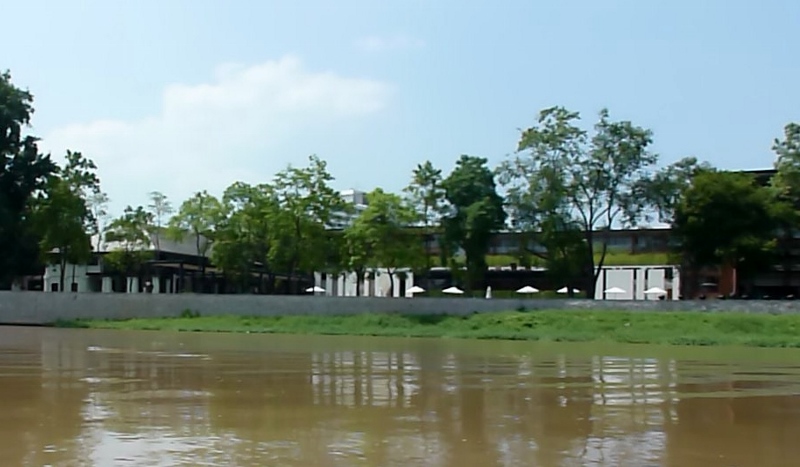 He also explained why the river was so brown. During the rainy season, the mud and silt is always kicked up.  So for a few months a year the river is brown and the other months, you can actually see the fish swimming.  He said the fishermen prefer it when the river is muddy, so they fish can’t see them coming.

After going down the river a bit, it was time to turn around and head back up.  This is only because there was a waterfall about 200 yards ahead and not meant for any of the boats.  So we went back up the river and beyond our debarkation point as well.  We then pulled up to a dock, where a nice lady appeared to be awaiting our arrival. 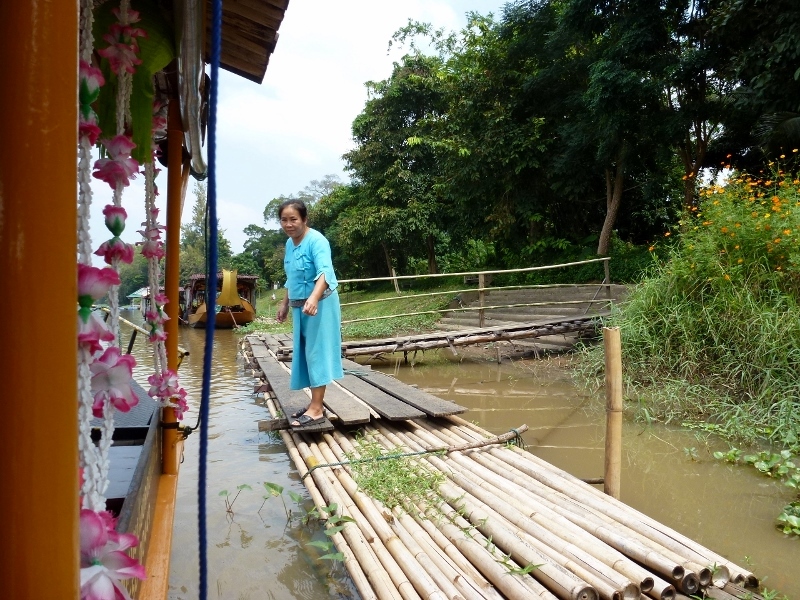 The tour beyond the river cruise Our boat stopped and we all filed out along the bamboo dock and made our way to the banks of the Ping River.  Here is where we finally found that beautiful hand carved sign “Scorpion Tailed Boat”. 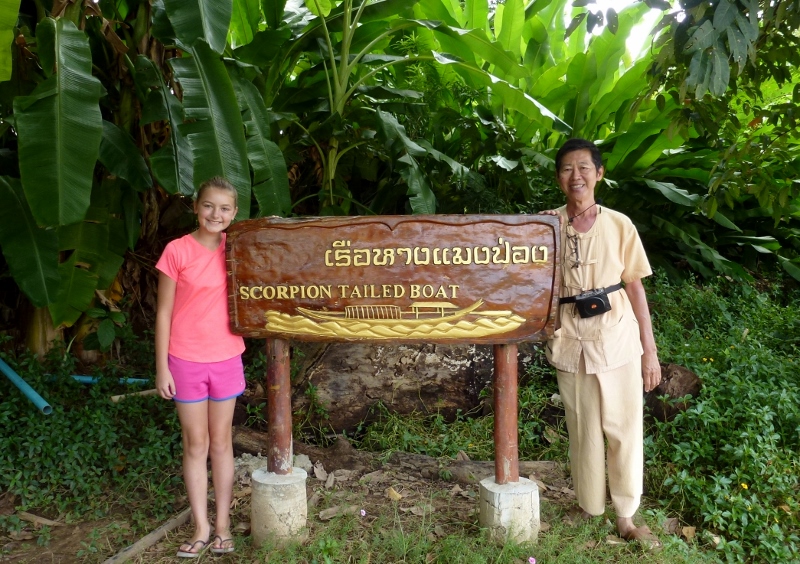 Ah, so this is a planned part of the tour.  We walked along the path and passed through vine-covered gates and entered into a secret garden. It was absolutely lovely.  I guess I didn’t research the cruise well enough, as I didn’t know this was part of it.  I do recall reading that juice was included, but nothing like this. 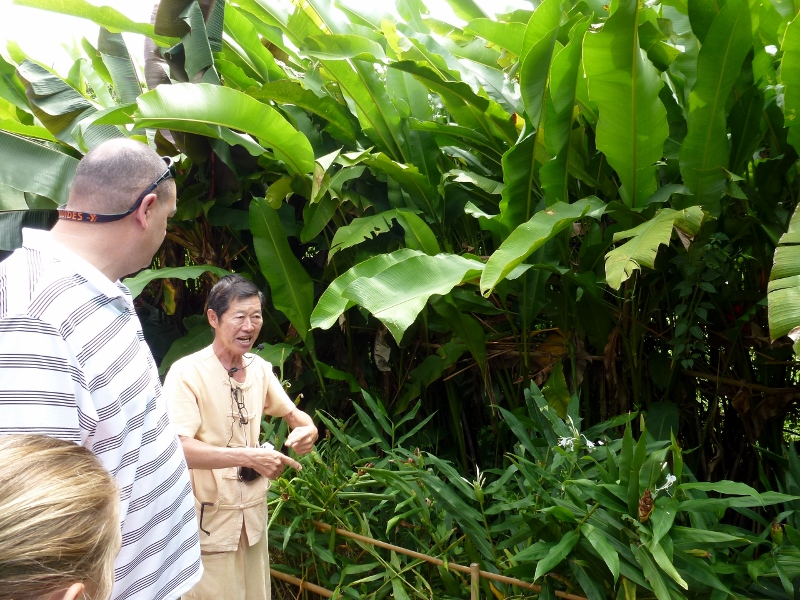 Our guide walked us through the garden and explained each plant, tree, flour and gave us a lesson on how it was used in Thailand.  It may have some medicinal value or cooking trick, but it was all fascinating.  We even learned how some of the plants ate insects and protected themselves from predators.

It was then time to have the juice I read about. We all walked over to a perfectly set table, displaying six little plates that were works of art.  We all had a glass of Lychee juice as well as a plate of mango sticky rice. 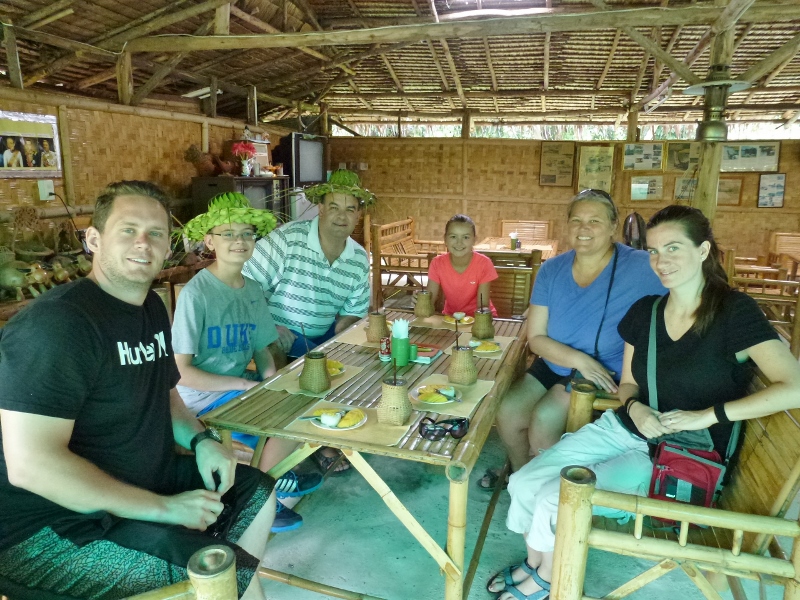 Oh, the history lesson wasn’t over yet.  As we were eating, we learned more about traditional devices used to capture snakes and eels, as well how to weave hats and more. 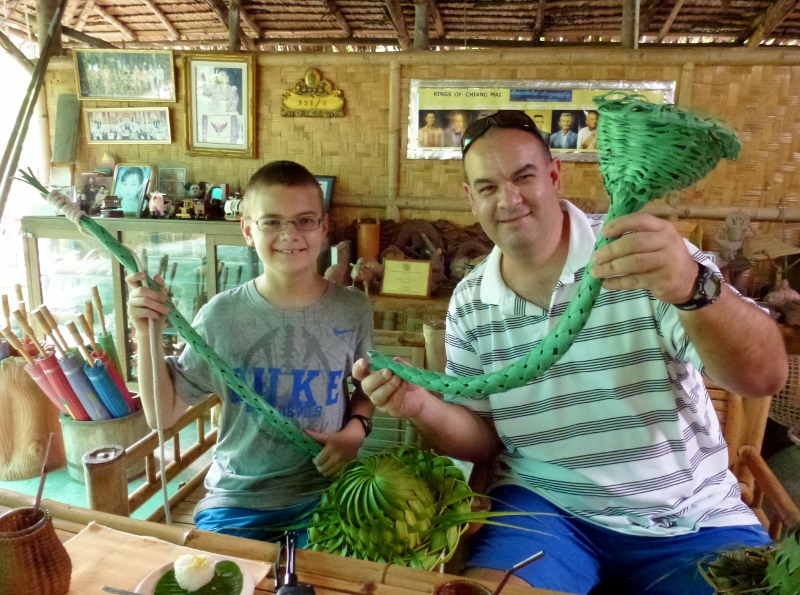 This was a treasure trove, a little mini museum all in the guides back yard!  He even had a hammock made from one piece of bamboo.  It was a nice surprise and we all really enjoyed our time there. 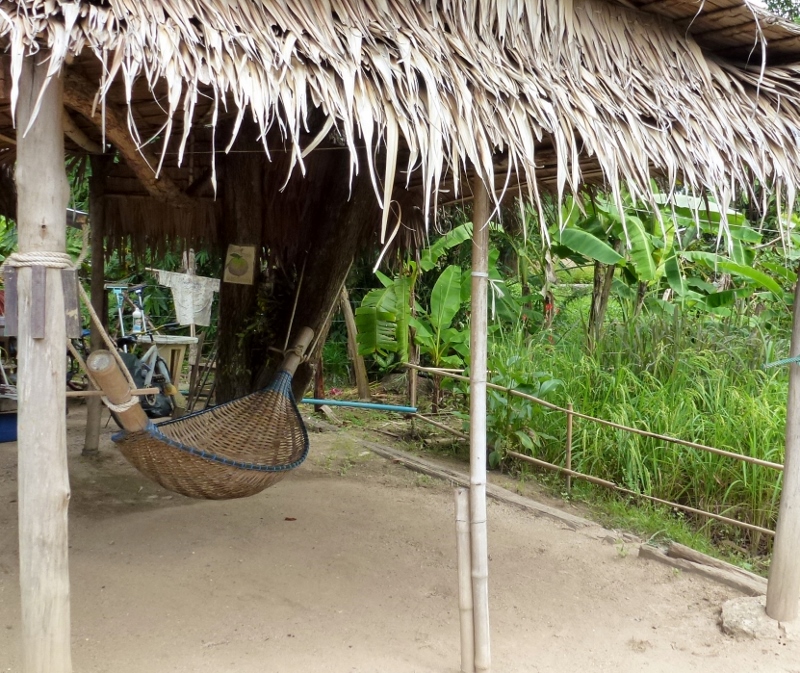 Soon it was time to return to our starting point.  We made our way back down the river and stopped to take photos with our new friends.  It was such a wonderful day.  I know we signed up for a river cruise, but the stop off at the private garden was really a special treat.  The kids were fascinated and so were the adults.  This was a perfect educational day in a fun way. I would recommend this day out for sure. 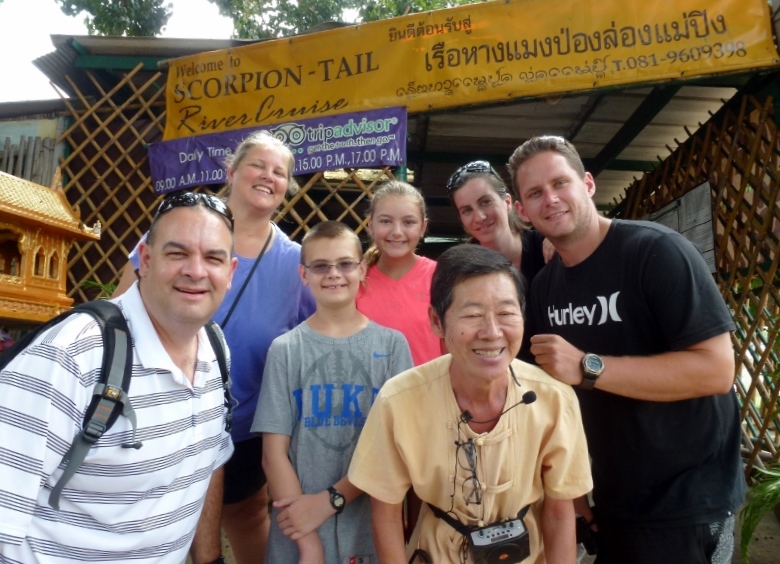 Back to our songthaew journey getting there

I felt the need to mention our songthaew driver experience to the guide and how the driver tried to get us to go to another location.  He was aware that the songthaew drivers were doing this.  You see the songthaew drivers get a 30-50% cut of the sales from the other river cruise for the people they bring there.  The Scorpion Tailed River Cruise wants no part of this and feels he will get good customers based on the cruise and not by being tricked to come.

Sidenote from Alan:  I really liked this tour.  All I knew about it was it was a river tour, but it turned out to be much more fun than I anticipated.  Our tour guide/host treated us like family and it was very educational (the fun kind).  A couple of things that I thought were interesting:

We thought our readers should be aware of this too.  We did pass a few of the other cruises along the way, and they didn’t seem to have a guide on their tour. It appeared to be just a boat ride up and down the river.  You will need to do your own research and decide. You can also read reviews on Trip Advisor.


What to do in Chiang Mai! 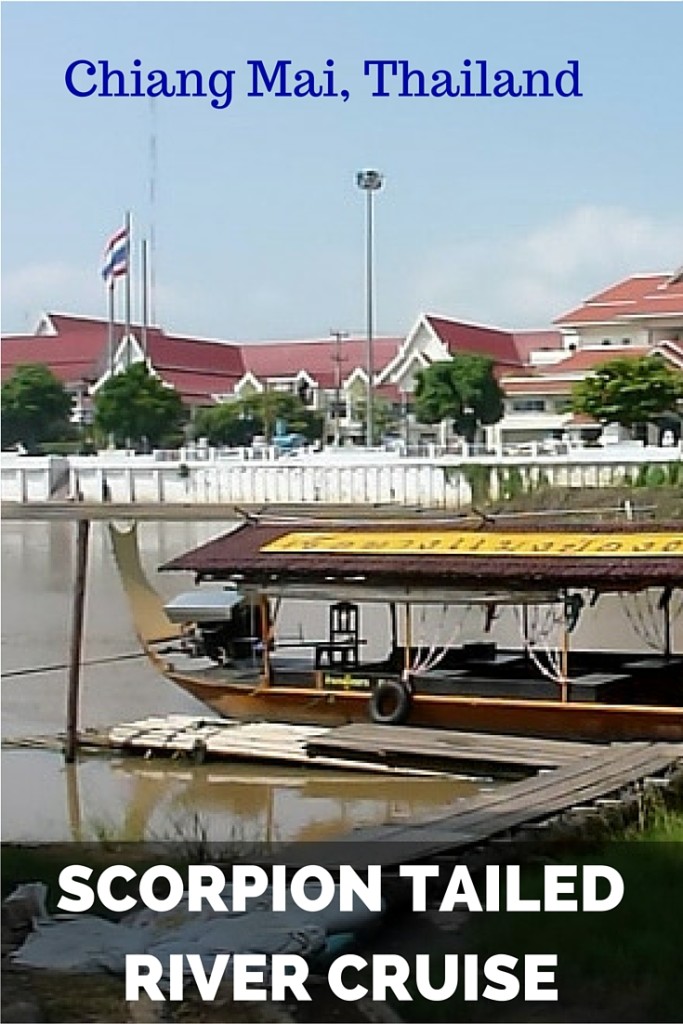