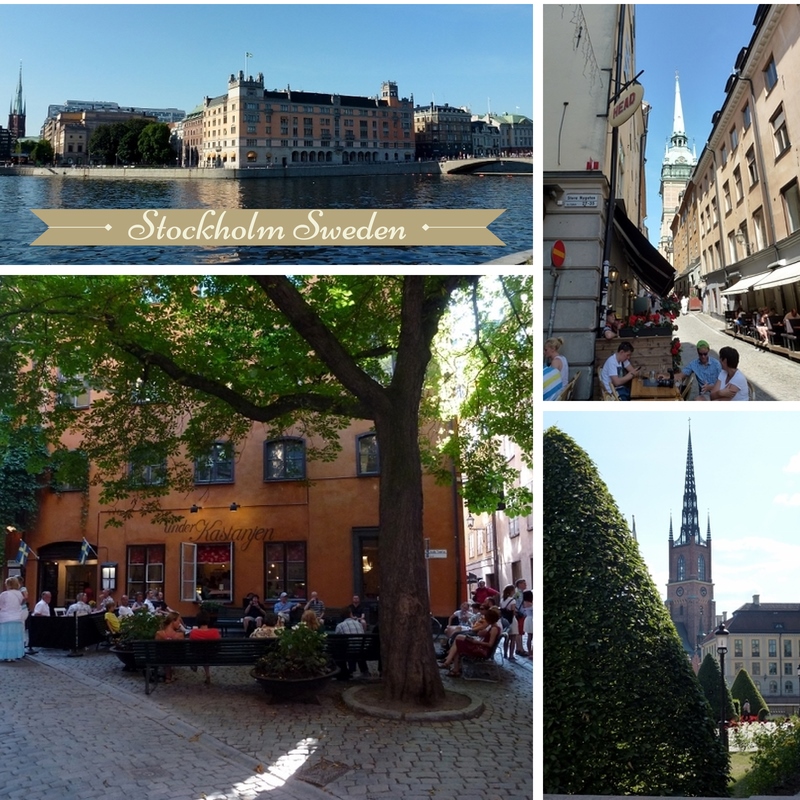 The last stop on our travels prior to Southeast Asia brought us to the city of Stockholm Sweden.  Our plan was a very short stay, for a few reasons:

1. We were flying out of Stockholm direct to Bangkok;
2. Heidi booked the flight a long time ago, so we were committed to the date of departure;
3. Stockholm, and Sweden in general, is very expensive;

Our motel (note the “m”) was close to the airport, which would allow us to get to and from the airport easily with all of our luggage (4 backpacks and 4 checked bags).  When we arrived very late at the hotel, we were informed that breakfast would be included, and that it is available from 4AM – 10AM.  What?!  Four in the morning?  Why so early?  It turns out that since Sweden is so far north (59.3294° N latitude), sunrise is around 4:00.  That also means that sunset is really late (officially around 9:30), but it stays light out until almost 1AM or so.

Sidenote: The guy ahead of us checking in was an American. We got to talking, and gave him our story, and he was pretty excited about what we were doing. It turns out, he’s “selling it all” and plans to travel the US in an RV with his dog. That’s our “return to the US” dream! We meet some great people while traveling.

As this was a motel, we weren’t expecting 5 Star accommodations, but I will confess that I was a bit surprised at how small the room was.  It was about 10 feet square (not including the bathroom), and the queen size bed was also a bit on the narrow side.  The kids had a bunk bed, so at least they would not be super cramped.  The price was about $150 a night!  It was late, so we decided to just turn on the air conditioning (it was surprisingly hot), and go to bed.  Alas, no AC.  Sigh…

Once we woke up, we had our breakfast (they had bacon!), and decided to head into the city to see what’s what.  We were only in Stockholm for a couple of days, and wanted to make the most of our short stay.  Our motel was about 45 minutes from the city center, so we grabbed a shuttle back to the airport to catch a city bus into the city.  Our shuttle driver asked me how long we were staying, and I told him we there for just the one day.  He suggested we visit Old Town in Stockholm.  It was a fantastic suggestion! 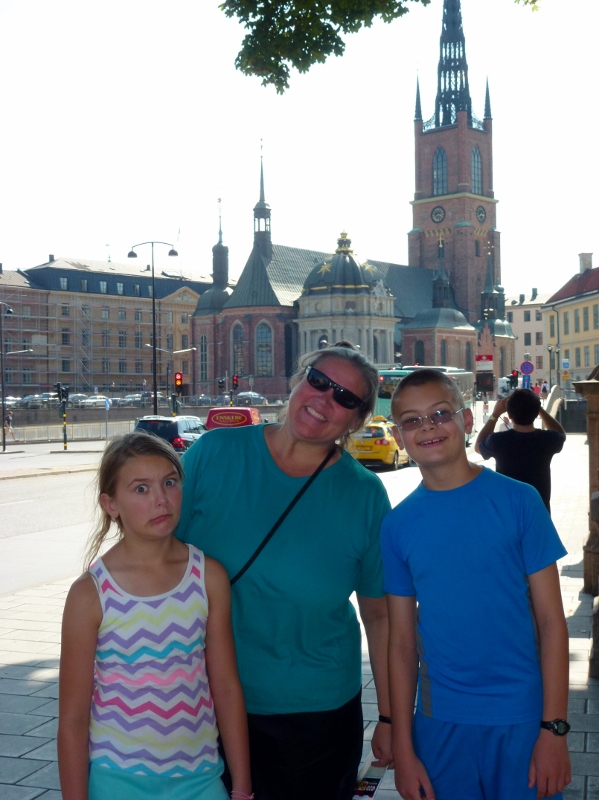 At the airport, we purchased our bus tickets, and a helpful lady gave us a map, and showed us how to walk to Old Town from the bus terminal.  A leisurely 45 minute drive got us to the bus station, and we were officially in Stockholm.  Once we had our bearings, the first item of business was to get some sustenance (and find a bathroom).

Once fed, we had an easy 15 minute walk to Old Town.  Stockholm is such a beautiful city.  We crossed the Vasabron (The Vasa Bridge) over the river Norrström. This river connects Lake Mälaren with the Baltic Sea.  Across the bridge, and we were in Old Town!

This is such a quaint town with cobblestone streets.  If shopping is your thing, this place delivers.  We didn’t buy anything, but the stores and store fronts were so interesting.  The most popular stores were the ice cream stores (go figure) where they hand make waffle cones.  The cool thing is that they have samples of the broken cones available for everyone to sample.  In the interest of diplomacy, we tried a few, and they were very nice indeed. 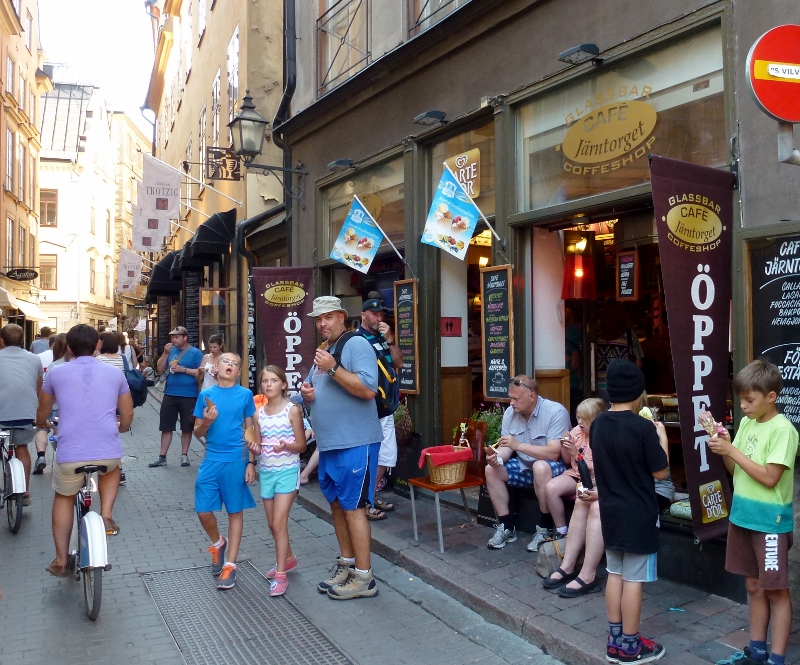 We continued to the other side of the island where the ferries are located, and were amazed by the great views.  We saw a boats ranging from kayaks to modern ferries, and even a three masted old sailing ship that’s currently used as a youth hostel. Continuing our journey, we ran across a statue of St. George and the Dragon, and enjoyed the vibe.  It was nice taking a bit of a break as walking on cobblestones can really make the feet sore.  With our respite over, we continued on, and saw many tour groups with tour guides speaking a myriad of languages.  That’s one of the things I really like about traveling around Europe. We had not been in Old Town long, but the kids were starting to get tired, so we decided to head back.  Since our motel is nowhere near a grocery store, we decided to stop and get some food/snacks before we caught the bus.  The train station and bus station are collocated, and we were informed that there was a decent grocery store on the lower level.

Talk about a store!  I’ve never seen such a well equipped grocery store in a train station.  As expected, there were tons of locals and tourists grabbing groceries prior to catching their various trains/buses.  With our shopping cart full, we made our way to pay, and ran into a problem.  With US credit cards, we sometimes have issues paying for things, since we only have a magnetic strip on the card. In Europe, they use cards with embedded smart chips.

Heidi was in the checkout stand, and she was getting assistance from one of the employees, and as she was paying, it asked for her PIN.  We don’t have a PIN for the card, so there was nothing to enter.  Unfortunately the buttons were labeled in Swedish, and I think she hit the cancel button, so she had to start the transaction all over again.  This included swiping all of the groceries, and bagging them.  Ugh!

With the grocery challenge completed, it was time to catch our bus, and wouldn’t you know it, it was right there.  No waiting!  Our evening was pretty mellow.  Heidi went to the lobby to write some articles, and the kids and I just hung out in our room watching TV.

The next morning we did the breakfast thing, got packed, and while we were waiting for our shuttle to the airport, we ran into yet another US traveler who was heading back home to California.  This was the end of her trip, and you could tell that she was sad to leave Sweden. Even though we were only there for only a couple of days, I would definitely visit Sweden again.  Stockholm was a great city, and we really enjoyed Old Town.  If you’re ever in Stockholm, I would say that Old Town is a must see.  We were not able to see it, but you can take a ferry from Old Town to Djurgärden which is an island that has plenty of walking paths and places for the kids to run around.

If you want to explore more and perhaps you should see if the Stockholm card is worth buying for your transportation.

2 thoughts on “Checking out Old Town in Stockholm Sweden”