We have been traveling with our 3 generations for about 5 weeks now.  Everything has been smooth as silk and absolutely no problems at all, that is until this moment.  Apparently you are never too old to be scolded by your mother. 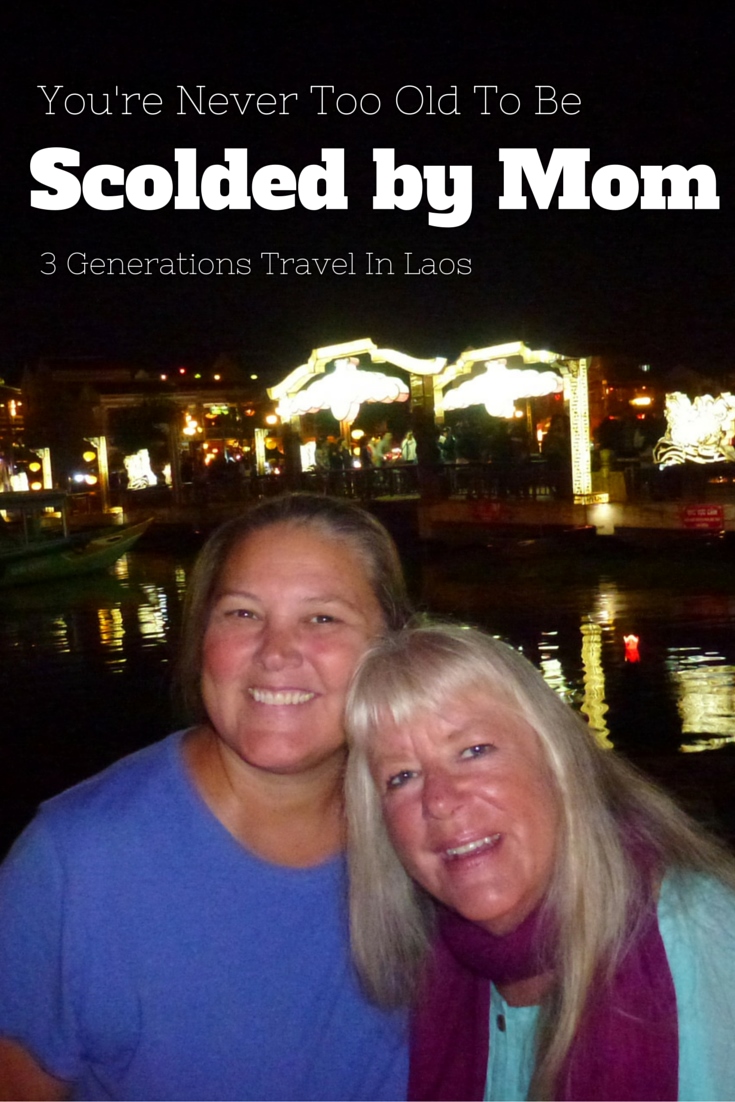 The funny thing is, I know when she is angry, I mean really angry, and this was one of those times.  When her upper lip curls under just so, and she firmly states “Heidi, don’t you ever do that again!”, I know she means business.  Unfortunately for her, it made me laugh!  Here is my 72-year-old, tiny 5’3″ mom scolding me!  Let me give you a little background and let you know how it all “went down”.

It was a travel day and time to move from Vang Vieng to Vientiane Laos.  This alone is plenty of stress on the family.  Our VIP bus was scheduled to depart the station at 10 am and our shuttle was to pick us up at the “M-mart” in town at 9:30 am.  We were all set and ready to go and made it to our meeting point, with no issues. 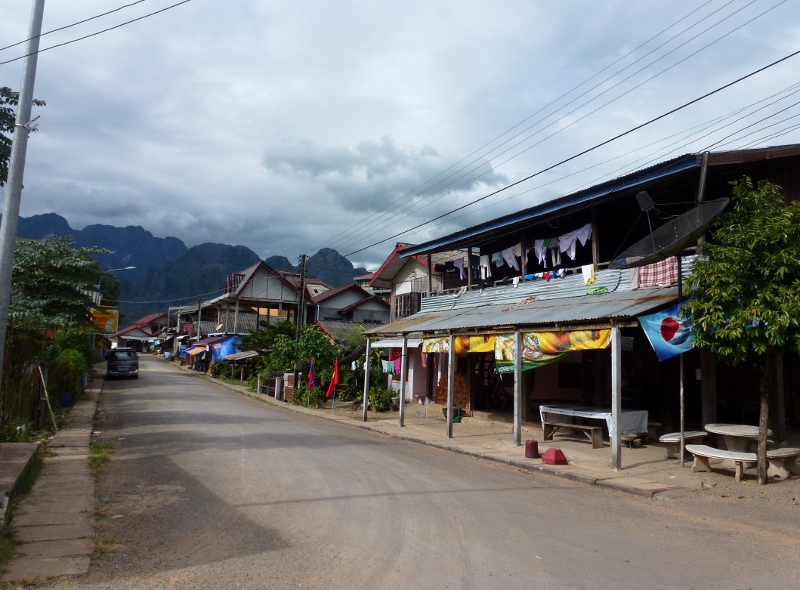 Time passed and there were several others also waiting for the shuttle, when we realized 10 am had also passed.  We checked with the ticket agent and apparently our shuttle broke down, we missed the VIP bus, but he would squeeze all 12 of us into a mini van and have it take us all the way to our destination.  Alternatively, we could all wait for the next bus at 1:30pm.

There was no way all of us and out luggage would fit in the minivan provided, not to mention Lars and I don’t do well on the mountain roads in the small vans.  We opted to wait, even though Gma Bev was game for moving on in the mini van.  We hung out around town for a few more hours and waited, in the heat for the next bus.

The next shuttle arrived on time and took us to the local bus station, but the VIP bus arrived over an hour late, so that meant we sat waited yet another hour, in the heat for the bus.  Finally at 2:20 pm, we could load the VIP bus.  Gma Bev and Alan made sure all of the luggage was loaded, while the kids and I hopped on the bus to scope out the best seats.   If you recall on our last VIP Bus Adventure, the last few rows in the bus had zero leg room!  Gma Bev and Alan each requested a window seat and Gma Bev wanted the scary side (the cliff side) of the bus. 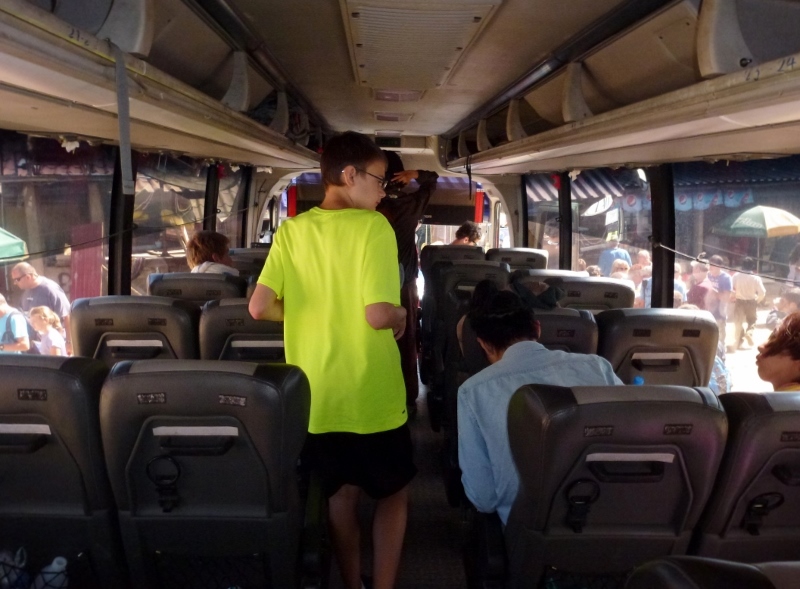 We picked out seats, but we didn’t find one on the cliff side for Gma Bev.  Eventually everyone was settled on the bus, excluding one lone man standing in the aisle.  The driver wasn’t leaving until we were all seated, yet this man wouldn’t sit down in the one open seat up in the very front.  He stated the lady in the window seat wouldn’t allow a man to sit next to her, as it is against her religion.  Great!  There is one seat left and one man left and they can’t go together.

The driver started asking around in the seats in front of us, if there was a female traveling alone that could sit up in the front.  I turned around to Gma Bev behind me, who was perfectly happy with her window seat and chatting with the guy from the Netherlands next to her.

I asked her if she wanted to move up to the front because the lady couldn’t sit next to a man.  I also stated that it would be a much more “thrilling ride” looking out the front window, since she didn’t get the cliff side this go round.  She slightly snarled and moved up front.  The man who was in the aisle took her old seat and all was right with the world. The bus could now move! 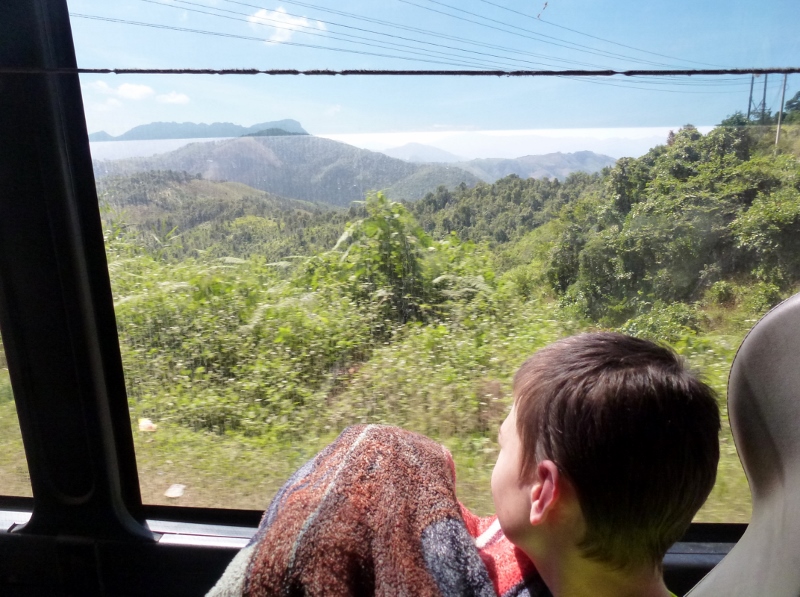 This VIP Bus ride out did the last one with the bobbing, weaving, bouncing, avoiding potholes, slamming on brakes and honking of the horn.  It was clear the driver was trying to make up for lost time and get back on schedule.  I was motion sick for about the first 45 minutes and couldn’t seem to get any of the AC vents to blow my way, to help me out.  I held it all in, but it was close.  I even took out my bottle of water and splashed my face as well as dumped a bunch down my shirt.

Unbeknownst to me, Gma Bev was having quite the different experience.

Our 3 1/2 hour bus ride from Vang Vieng to Vientiane was to include a pit stop for snacks and toilet breaks.  About 2 hours into our journey, the driver pulls off on the side of the road, with nothing but bushes and dirt around.  Is this our pit stop?  Are we supposed to get off?

One by one, people started to get up and exit the bus, Gma Bev included.  Alan the kids and I just stayed put, in our seats.  About 2 minutes later the driver is honking the horn for everyone to return.  Apparently he took a quick pit stop in the bushes and that is what we were supposed to do as well.  The bus quickly loaded, but not without Alan yelling out the window telling Gma Bev to get back on the bus.

She didn’t seem too thrilled, when she went back to her seat.

About an hour later we arrived at our destination and were out waiting for our luggage.  This is the moment!  This is when Gma Bev scolded me.  I approached her and said, “Wow, what a ride.  Sorry you had to sit up front, but did you have a good seat?”

Whooops!  Shouldn’t have said anything.

Gma Bev turns to me, with her upper lip curled under just so, and she firmly states “Heidi, don’t you ever do that again!” 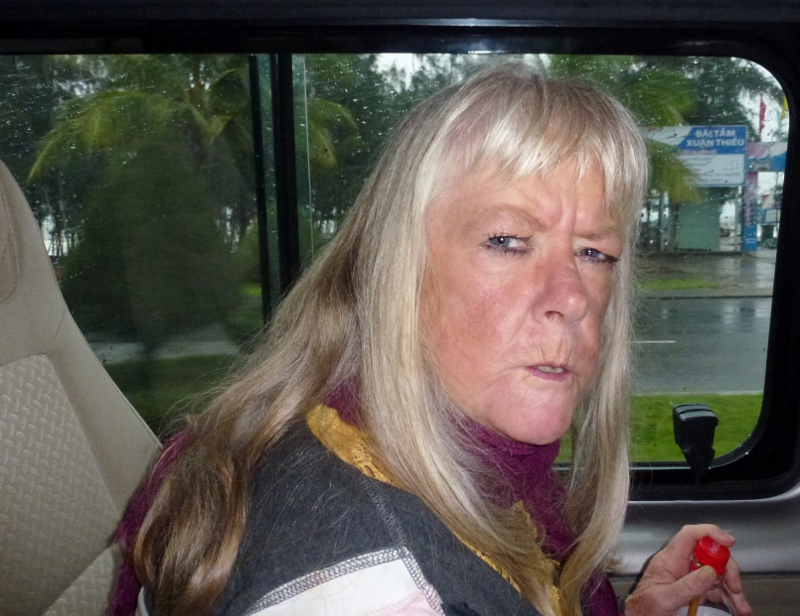 I started laughing and she went on to tell me why.

Apparently for Gma Bev it was an adventure and the Ride From Hell!

Of course ALL of this was my fault for “volunteering” her to sit up front.  I of course apologized, but reminded her that I “asked” her if she wanted to go.  She could have said “NO”, but didn’t.  I guess one thing you should know about Gma Bev, she rarely says no.

Anyway, there you have it.  I got in trouble, I laughed and I am pretty sure that just added fuel to the fire.  After a while Gma Bev cooled down.  I think she can laugh about it now, but she was having nothing to do with laughter at the moment. 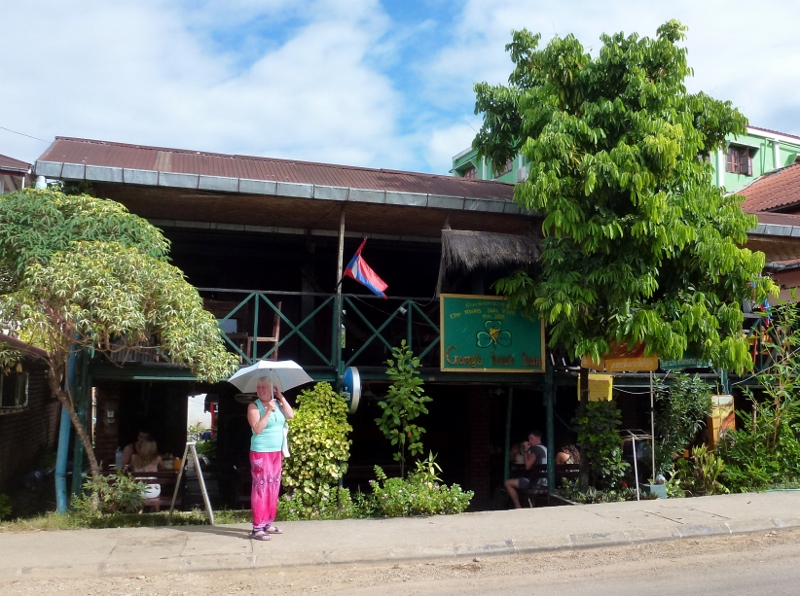 Disclosure:  This is my take of the entire situation.  I am sure Gma Bev (my dear sweet mother) will add her version to the comments.  🙂  We just love her!