Yes, another Food post from the Official Non-Foodie in the family.

Since we’ve been here, we have attempted to try local cuisine embrace Spanish food.  Honestly, I’m not usually a big part of the we I just mentioned, but I do try a bite here and there.  There are times, however, that you want some “normal” food.  “What is normal food?” you ask.  Good question.  The answer can depend on our mood, but a good answer is:  hamburgers. 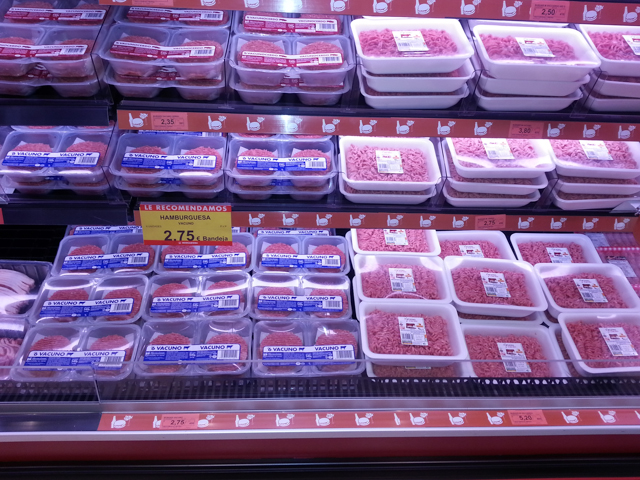 And for hamburgers, what do you need?  You need buns, lettuce, onions, pickles, ketchup, and mustard.  And…hamburger meat.  And therein lies the problem.  We’ve had a tough time finding hamburger meat that doesn’t taste “funny”.  Not “funny like Alan” funny, but the “I hope I didn’t get food poisoning from that burger” kind of funny.  So far, the hamburger meat here has just not tasted right.  I theorized that maybe it was the diet of the cows, or the ranging habits of the cattle were different.  Hell…maybe Spanish cows don’t like Americans.  So we’re asking ourselves, “Where’s the Beef?”

“So what kind of meat have you been eating?”  Another excellent question.  When I read the labels, I was shocked.  Shocked, and a little wigged-out to be honest.  In reading the fine print (in Spanish), I found that the beef we’ve been buying has not been 100% beef like we’re used to.  Here’s a small sample of what I found: 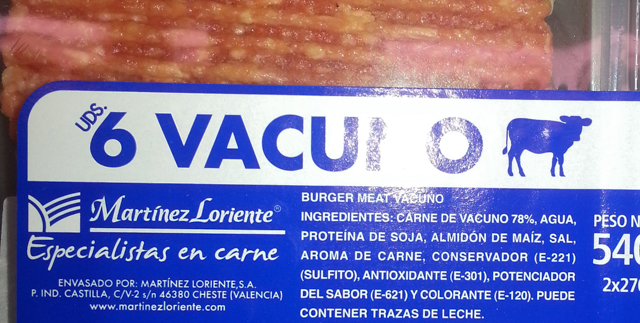 The first one shows 78% beef, water, soy protein, cornstarch, and…at first I thought it was Aroma of Meat.  I figured that would be a great cologne for men!  Or a new deodorant!  It’s really just meat flavor.  Back to the list…preservative (E-221).  E-1 through E-220 caused cancer in Spanish mice, but E-221 is A-OK!  It continues with sulfites, antioxidants, flavor enhancers, dye, and maybe some traces of milk (that was probably irradiated with Polonium 210 or something).  So my point is that there is a lot of Un-meat in the meat we were buying, and no wonder it tasted funny. 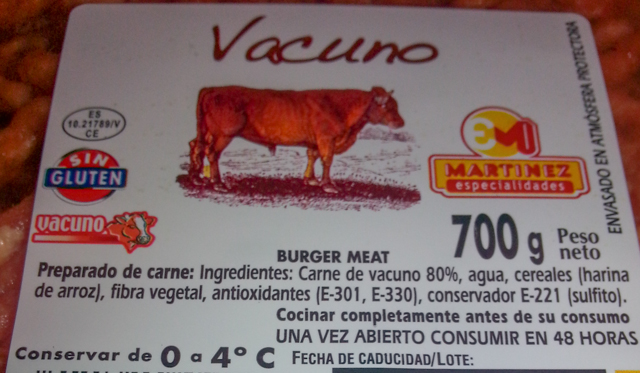 We’re up to 80% meat on this one, and while it’s got less un-meat, it still has rice flour, vegetable fiber, and our old friend preservative E-221.

We almost purchased this one: 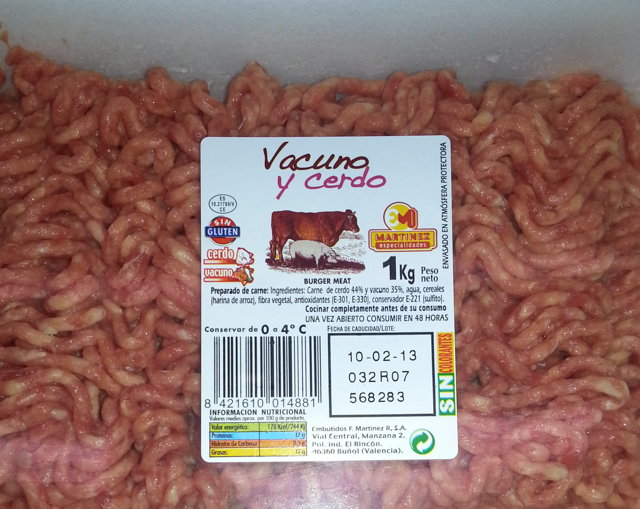 So even though it says “BURGER MEAT”, it’s got a picture of a cow and a pig.  So that means there’s even less beef in the meat.  What’s the percentage of cow and pig?  The percentages are 35% and 44%, respectively.  Breaking out the slide rule shows that’s 79%  meat product, 21% other stuff.

Well the good news is that we found some hamburger meat that was 100% cow.  Hooray!  The bad news is that it’s at an Eroski 20 miles away, and it’s very expensive!  Once we bought it, we got it home, and Heidi was quick to cook it up.  She brought out a bit for me to taste.  And I’ll admit that I put it in my mouth with some trepidation, but it tasted like normal hamburger should taste.  Another food quest conquered!  Now if we could only find pickles that Heidi likes…