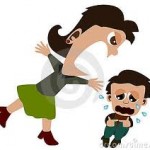 While experiencing life here in Spain, I have been very deliberate with myself, and the kids, to not sound judgmental when commenting on the way things are done in Spain.  I don’t want to sound, and I don’t want the kids to sound whiney, but accept that different people do different things, or handle situations in a different manner.

However, we had an experience that was just really bizarre.  So strange in fact, that I thought I was misunderstanding what was going on, and what was being asked of us.

Here’s what went down at our School in Spain:

Heidi and I go to pick up the kids at school on a day when they have comedor.  This is when the kids stay after school, have a traditional lunch, and play with their classmates.  It’s run by three or four ladies, who, to my knowledge, are not teachers. We arrive, and as we’re looking for the kids, I see our son sitting on the ground close to the school gate.  His expression is neutral, but I can tell something is up.  One of the ladies is holding a child’s hand, and is telling Heidi that something happened to our son.

I figured it was some bullying thing, or accident, or something like that.  Now all of this happens very quickly, and there are multiple conversations going on, so that adds to my confusion.  Now the lady that is holding the kid’s hand is telling Heidi that he was throwing stuff at our son.  (The kid is maybe 3 years old, and 3 feet high.)  Our son is usually very good with little kids, so the Confusion Factor is increasing.  What the lady is asking Heidi to do is to yell at the kid.  Huh?  What!?

Meanwhile, I’m having a side conversation with the same lady asking if this kid is the problem.  She’s basically telling me this kid is bad.  I ask, “Mal?“, and she says, “Sí.  Muy muy mal.”  (Very very bad).  So as I understand it, this 3 foot kid is concentrated evil, and he was beating on my kid, and she wants Heidi to yell at the kid.  While this is going on, Heidi bends down, and is telling the kid, “El es mi hijo.  No tires.”  (He is my son.  Don’t throw.)  As Heidi is talking to the kid (not yelling), they other women around seem to be egging Heidi on.  I didn’t understand what they were saying, but it felt like, “Yeah!  Tell him off!”

(side note: it seems that it is acceptable for adults to scold/yell at any child in the wrong)

The kid is kinda crying, and I got the distinct impression that the ladies were displeased with Heidi’s performance, and that they wished she had really let the kid have it.  Now once I realize what’s going on, I’m a bit disappointed that they didn’t ask me, because I could have really scared the crap out of the kid.  Can you imagine me being very animated, and yelling at a kid?  I would have scared him good.

Can you believe this sort of thing is OK?  I can’t imagine that happening in the U.S., but I guess it’s tolerated here at our school in Spain.

I guess it takes a village to discipline a child.

18 thoughts on “This would definitely NOT happen in the U.S. – (School in Spain)”