We have talked a lot about embracing the culture here, and Lars and I had our introduction to the “other” religion in Spain.  Yes, I am talking about Spanish Fútbol.  For Lars’ birthday, I purchased two tickets in one of the VIP sections at Málaga’s Estadio La Rosaleda.

Surprisingly, we’ve actually watched very little fútbol while we’ve been here.  We do not get Spanish television (only English TV), so we only see Spanish fútbol when a Spanish team plays a English team.

While Málaga may not be well-known outside of Spain, the team had a very successful season qualifying for the EUFA Champions League, and made it all the way to the quarterfinals.  They were eventually beaten by one of the Finalists (Dortmund), but had a bit of a Cinderella Season.

Lars and I had visited Real Madrid’s Bernabéu stadium way back in 2012, and had a great time.  That stadium was huge.  It seats about 85,000 people.  In comparison, Yankee Stadium seats about 55,000.  While I had done a bit of research on the Málaga stadium, it was more about finding some good seats.  I didn’t even think to look at how large the stadium is, or how many people it can hold (about 30,000).

Game day arrives, and Lars and I leave early.  Málaga is about an hour away, and while we had a map to the stadium, I wanted to make sure we had plenty of time to find our way there.  It was a quick trip, and after a couple of wrong turns, and asking a traffic warden for some assistance, we made it to the parking area.  One of the cool things about VIP parking here was that they wash your car during the game so when you come out, you have a clean car.  Pretty neat, huh?

I was struck by how small the stadium was.  Again, I didn’t do my homework.  We saw tons and tons of people wearing Málaga uniforms, scarves, and colors (vertical baby blue and white strips), and absolutely NO opposing colors (red/black of Deportivo de La Coruña).  We practically walked around the entire perimeter of the stadium to get to the gate where our tickets were held.

Now all this time, I’m trying to play it cool with Lars around, but I’m so excited, I just want to jump up and down.  They find our tickets (whew!), and we’re escorted to our seats by a number of different young women perfectly coiffed and dressed in their smart uniforms.  One of them opens a big glass door, and BOOM, it hits us.  We have AWESOME seats!  Now in the interest of accurate reporting, I will write what I said:

“Holy sh*t!  These are awesome seats!”

Lars was also very impressed, and he shot me a great big smile.  While we waited for the game to start, we watched both teams warm up.  We were so close to the field.  The pictures I saw online didn’t do the view justice.  This is a fantastic stadium!  Due to its small size, there was not a bad seat in the entire stadium.  We were so close, we could hear the sound of the players heading and kicking the balls.  Sweet! 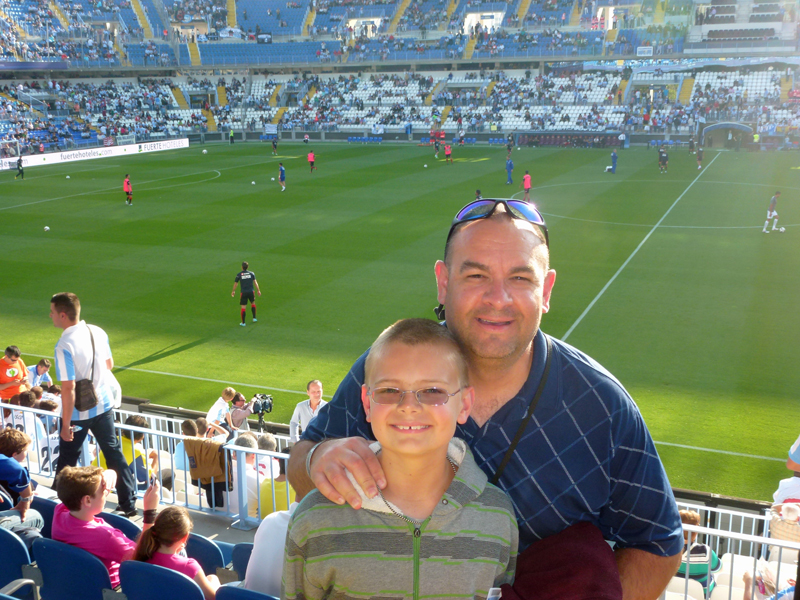 After a short while, an announcement was made, and it was apparent that the game was about to get started.  The noise and excitement started to build, and the fans made the stadium come alive.  For you (American) footballs, we were a stone’s throw away from the grass on the 50-yard line.  Did I mention how awesome the seats were?  We were seated in a relatively reserved section.  The upper section on our side, to our left was positively brimming with some serious die-hard fans.  They were waving banners, singing songs, and jumping around.

Play started, and everyone settled down to watch the match.  Throughout the entire game, there were many different chants.  Some of them I’d never heard of, but it seemed as if everyone knew when to clap, stomp their feet, or jump up and down.  I did hear the tune to “Old Macdonald had a farm…“.  I swear I did.  I couldn’t understand what they were saying, but it was definitely the tune.

During the game, the ball was kicked into the stands a number of times.  We watched as the fans quickly hit the ball back onto the field.  We were expecting someone to try and keep the ball, but not once did anyone try.  I told Lars, “If you catch the ball, you run as fast as you can!”  I mean, how cool would it be to take home an actual game ball?  Luckily, we were never faced with such a situation that surely would have caused a diplomatic row.

We participated in our first European Wave.  With such a small stadium, it was easy to track the progress, and join in at the appropriate time.  We were sitting at 6 o’clock, and the wave was strong until about 1 o’clock, and then it really gained steam at 3 o’clock.  It circled around about 3 or 4 times before finally losing steam.  Lars and I were having a blast!

Just before half-time, we (Málaga) scored, and the crowd went crazy.  They really love their fútbol here.  Once half-time started, Lars and I went up into the main booth area to get some snacks and drinks.  They didn’t have the Drink Guy, Peanut Guy, or Cotton Candy Guy selling food during the game, so we were a bit on the thirsty side.  The good news was that all of the food that was laid out was free.  The bad news was that it was a bit, how should I say, foreign to me.  Sorry…couldn’t resist.  I think Lars had a bite of something, but I got us drinks, and we jostled our way back to our seats.

Once the second half started, and the fans were a bit more “lubricated” with beer, or whatever it was they were drinking, the team spirit really started coming out.  During play, there was more banging of drums, chanting, and banners were brought out.  Behind the right side goal, there was a full-on mosh pit, with fans slamming into each other.  There was also a Which Section Can Be the Noisiest competition.  The same group of fans behind the goal would chant something, and then the noisy group to our upper-left would say it right back, and they went back and forth a few times.

There was a young couple on a date in front of us, and the guy was laughing, and looking at us.  He wanted to jump up, but didn’t want to get in our way.  I told him to go for it, and we chuckled a bit.  The mood was definitely infectious.  Another interesting chant thing they did was while Màlaga players would handle the ball, someone would hit a drum twice, and then the crowd would clap.  They did this while several players were passing the ball to each other, until the opposing team got the ball.

At about this time, we scored another goal, and again the crowd went wild, and started singing a Málaga chant.  Ten minutes later, Deportivo scored (sound of crickets).  They were staying in the game.  With the score at 2 – 1, the fans (known as Malaguistas) were really getting into the game.  It’s interesting to watch a game where the crowd cheers deft handling of the ball, or a nice series of passes.  There’s a subtlety that’s hard for me to describe, but it was fantastic to witness.

Near the end of the game was probably one of my favorite parts of the entire match.  Jérémy Toulalan (Málaga Defender) was handling the ball, and was playing keep away from a Deportivo player.  He was doing a fantastic job, and the crowd was really cheering.  He fell down, on top of the ball, and prevented the opposing player from kicking the ball.  Without touching the ball with his hands, he got up, kept handling the ball, and eventually passed it to a team mate.  The place went nuts!  That’s got to be a great feeling as a player being cheered on like that.

A few minutes later, Málaga scored again making it 3 – 1 until the referee blew the whistle for the final time, and it was game over.  I enjoy watching the players shake each others’ and the refs’ hands.  You don’t see enough of the good sportsmanship after the game in my opinion.  Once the last Málaga player left the field, everyone started shuffling out of the stadium.  We made our way to the freshly washed car, dealt with the typical traffic jam of people and cars, and went home.

It was a fantastic way to get baptized into Spanish fútbol.  Lars had a great time, and was really amped on the car ride home.  And everything you read was the truth.  Except for the part about the car wash.  I mean, come on…you guys are too gullible!

Where to Stay in Spain

A big shout out to Laura J. (VIP Area Management) of Málaga Club de Fútbol for all of her assistance getting those fantastic seats!

9 thoughts on “Our Baptism Into Spanish Fútbol”