What the heck is that? Many of you have been asking about our La Tomatina experience.  Well, we survived.  We had a blast. 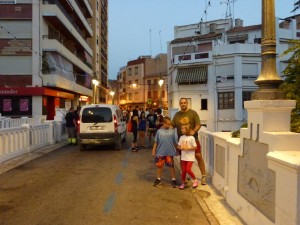 Making our way to the center of town

What is La Tomatina?

First off, if you do a search for La Tomatina on Google or YouTube, it will give you a good idea of the kind of tomato carnage that occurs.  Our experience was not as extreme, but it was a ton of fun.

Imagine inviting 40,000 of your closest friends to an open air concert that holds 10,000 people.  Throw in a bunch of all-night drinking, smoking (what’s that funny smell), and partying, not to mention, 50 tons of ripe tomatoes whose sole purpose is to be squashed and thrown, and that’s a good approximation of the event.

We got up very early, drove to Buñol and found a parking spot.  Since we didn’t know exactly what to expect, we got there very early.  Probably too early, but had we arrived much later, we would have had to walk a long way to the center of town.  We walked around a bit, saw people partying, sleeping (passed out?), and vendors selling various items (we bought a cheapo water-proof camera).  All the while, tour bus after tour bus was bringing in more people.

Show me the Pole!

After strolling around and seeing some very interesting looking people, we decided to try and view the “palo jabón”.  For those of you who flunked high-school Spanish, that is the Ham Pole.  It’s basically a wooden pole about 12 feet tall.  It was being setup when we walked by.  They lube the top half of the pole with soap or grease, and put a ham on top.  If you can climb the pole and grab the ham, it’s yours.  Yeah, pretty weird huh?

Once we got to a spot where I could see the pole, I put the kids on my shoulders so they could see what’s was happening.  We watched for about 30 minutes, and at first we were at the back of the pack of people, but then we were in the middle, and that’s when things got a bit worrying.  With the kids being so small, Heidi and I were worried that if the crowd started pushing, that the kids would get trampled.  I felt kind of bad for them since they were looking at peoples’ backs and butts when they weren’t on my shoulders.

Once we made the decision to retreat to a less packed spot, it was very difficult getting out.  We joined hands (me, Lars, Heidi, Anya), and made a path out of the fray.  It was a bit stressful to be honest.  Some people would step aside if they could, where others had more of the attitude of, “Move me if you can…”.  So I did what any good father would do, and I moved said people.  Not too rough, but after awhile we made it out of the main street and onto a secondary street.  Whew!

I have to give credit to the people who were running the event.  There was a lot of security personnel, and they did an admirable job of corralling people.  Once off the main street, we were able to catch a breather, and we got some water.  Now at this point, we were still a couple hours away from when the tomato fight officially starts (11:00), so we had some time to kill.  We decided to walk down a path that was parallel to the main street, so we could still hear the shouting and partying, but we had more elbow room.

And we sat.  And we waited.  About an hour before the start, Lars and I did some exploring to see if we could get a better view.  We passed by a bunch of TV vans, and went up a small street which was very close to The Pole.  As we were walking up, surprise!  We got doused with water from above.  Did I mention that it was cold water?  So a bunch of us are getting nailed with the water, and about 3/4 of the way up, I yell to Lars and ask him if he wants to continue up or go back down, all while getting sprayed from above.  He points down the street, so we make our way down.  One of the perks of being an apartment owner is you get to dump unsuspecting (and suspecting) passers-by with water.  It’s all in good fun, and it cooled us down.

As we were walking down, a guy shouted at us that we were going the wrong way.  He and his mates were also soaked, and we all were laughing at the situation.  One of the guys picked up the lone girl that was traveling with them, and threw here over his shoulder.  Another guy started smacking her butt on her wet jeans.  When she was let down, she was not happy.  The guy who did the slapping pointed at me and said, “It was him!”.  I said, “No, it was him!”, and pointed to another guy.  After a bit of finger-pointing, we all pointed at Lars, and agreed that he was the one who smacked her behind (that’s my boy!).  At that point, she kind of smacked the true culprit, and we all had a good laugh.

Spirits buoyed and clothing wet, Lars and I made our way back to Heidi and Anya.  We moved around a bit, and waited some more.  10:59…BANG!  The canon shot started the event, and everyone went crazy.  From the roof tops, you could see tomatoes being thrown, and water sprayed.  Looking at the revelers on the main street, tomatoes were going back and forth.  Occasionally, a stray tomato would get thrown down the side street we were on, and by the time it made it to us, it was just a skin.

The tomato density increased when a truck filled with people and tomatoes passed by, and then it got crazy.  I followed the zig-zagging path of a tomato from thrower to throwee, eventually caught one.  What did I do with it?  I did what any good father would do.  I rubbed all over Lars’ head, and then did the same to Anya.  That’s definitely a perk of being a dad at La Tomatina.  I handed the stringy tomato remnants to Lars, and what did he do?  He did what any good brother would do, and threw it at his sister!

Once we had been doused with water and had some tomato bits on our bodies, we decided to try and get out of the area.  Easier said than done.  Once again, it was a Wagoner Chain weaving through the crowd.  We couldn’t go back the way we came, so we took a few detours, and finally made it to the relatively uncrowded road where the tomato pilgrimage began.  It was about a mile uphill, but after dealing with the pushing and pulling crowds, it was easy going.

Lars and I were ahead of Heidi and Anya, and we ran into a fellow American from Nashville of all places.  It’s a small world!  We made our way past more partying people who were drenched and/or covered in tomato juice.  Once we got to the car, we put our dirty shirts in the back, and put on some fresh ones.  Aaahhhhh.

Our parking spot was perfect.  We were able to quickly get out of town with minimal traffic.  Police presence was very conspicuous, and they were stopping people and administering breathalyzer tests.  I was excited, because I have never had one, so I rolled down my window getting ready to blow.  Alas, the officer saw the wife and kids and waved me by.  Oh well.

There was a lot of waiting, and the crowds got me worried about the kids, but we all had a lot of fun, and I would do it again.  La Tomatina 2012 was a success! 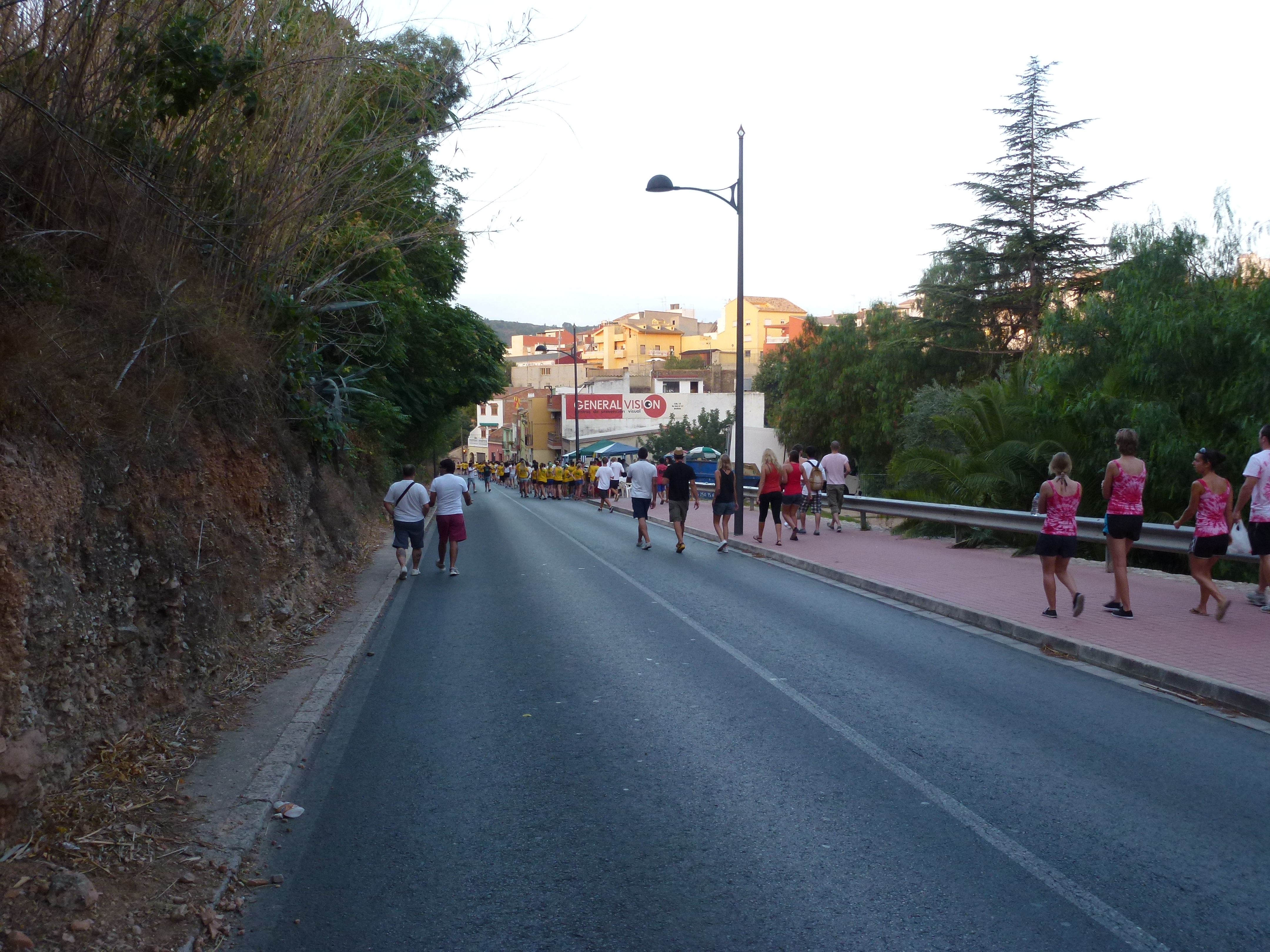 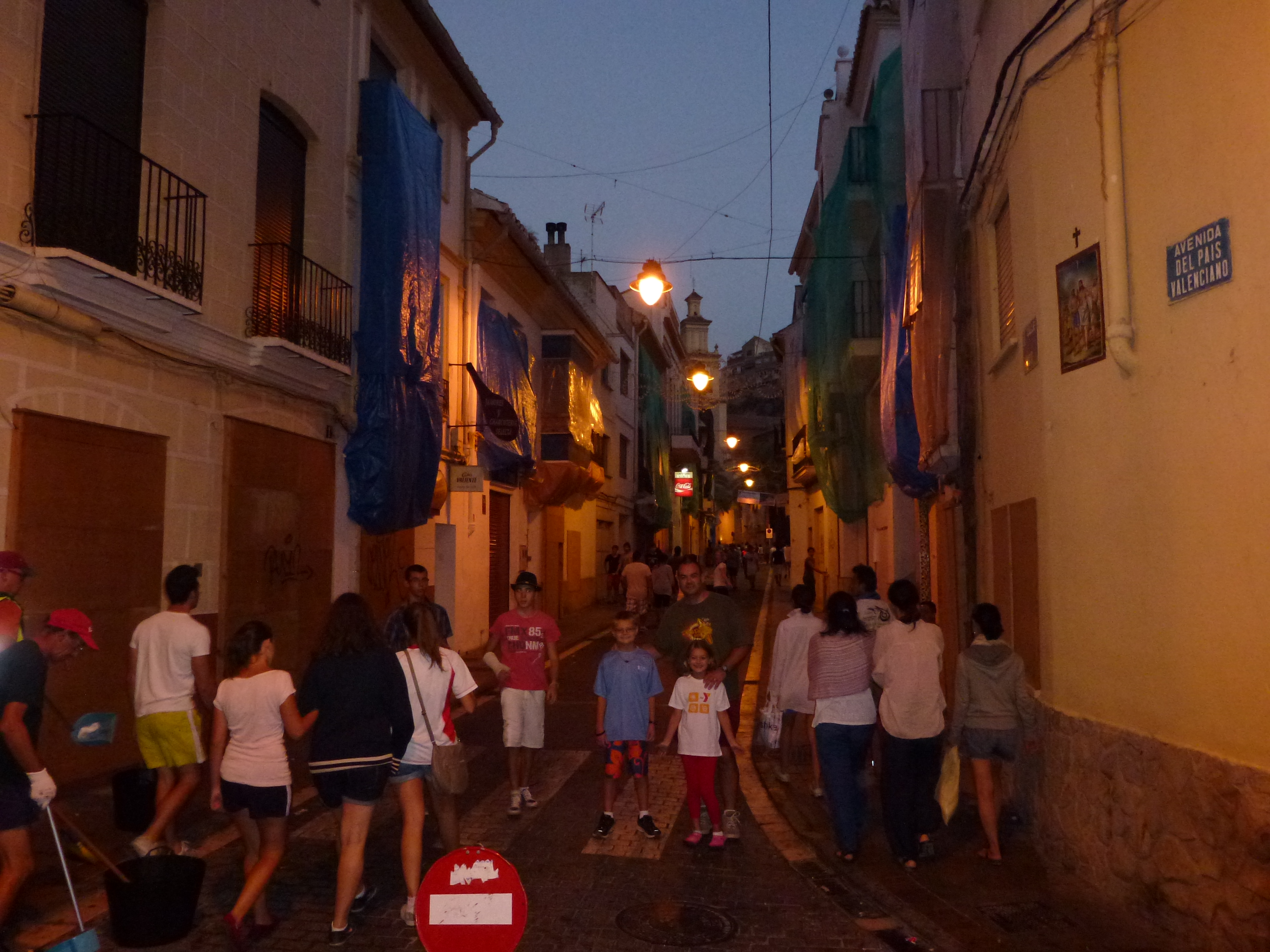 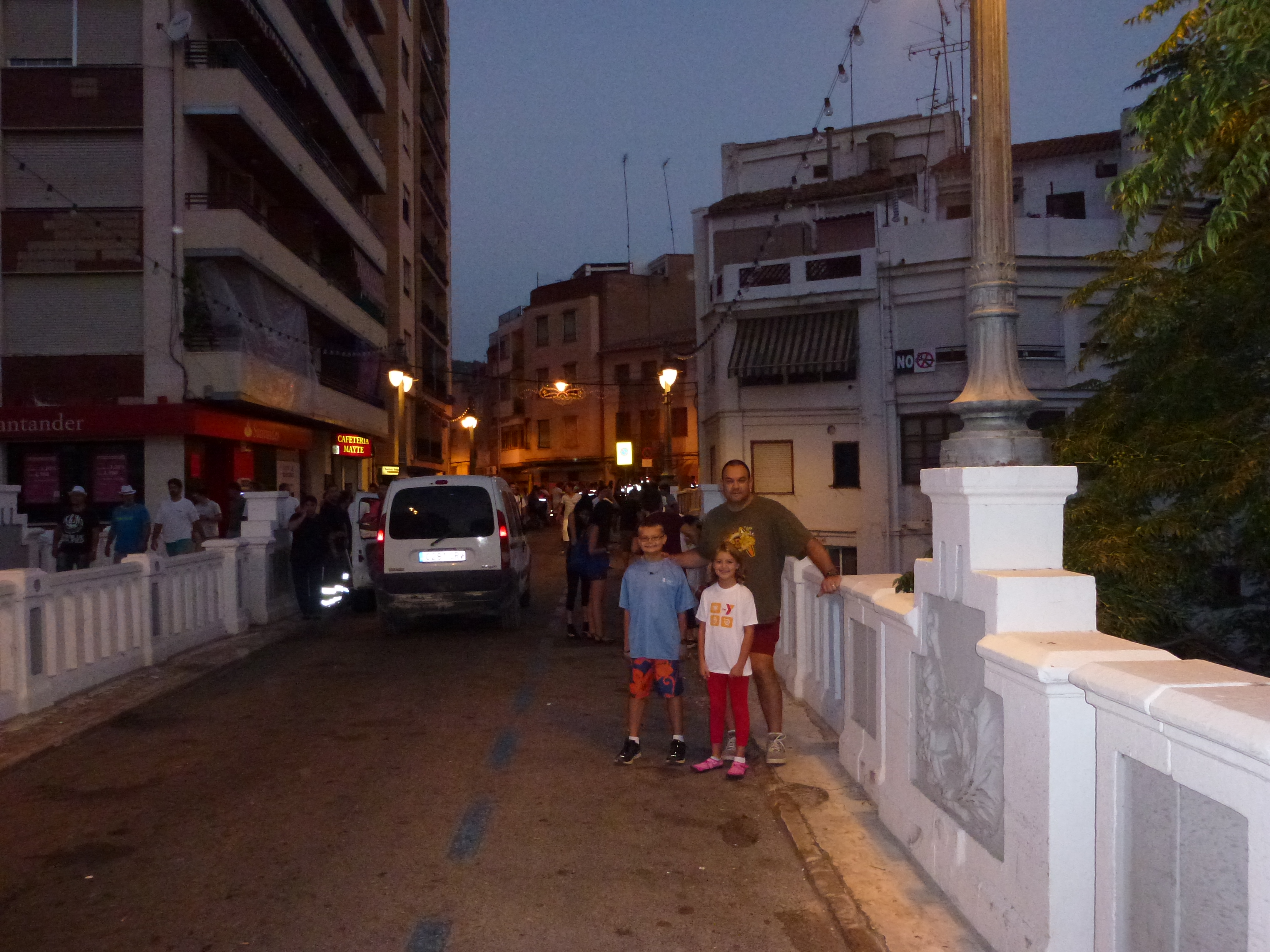 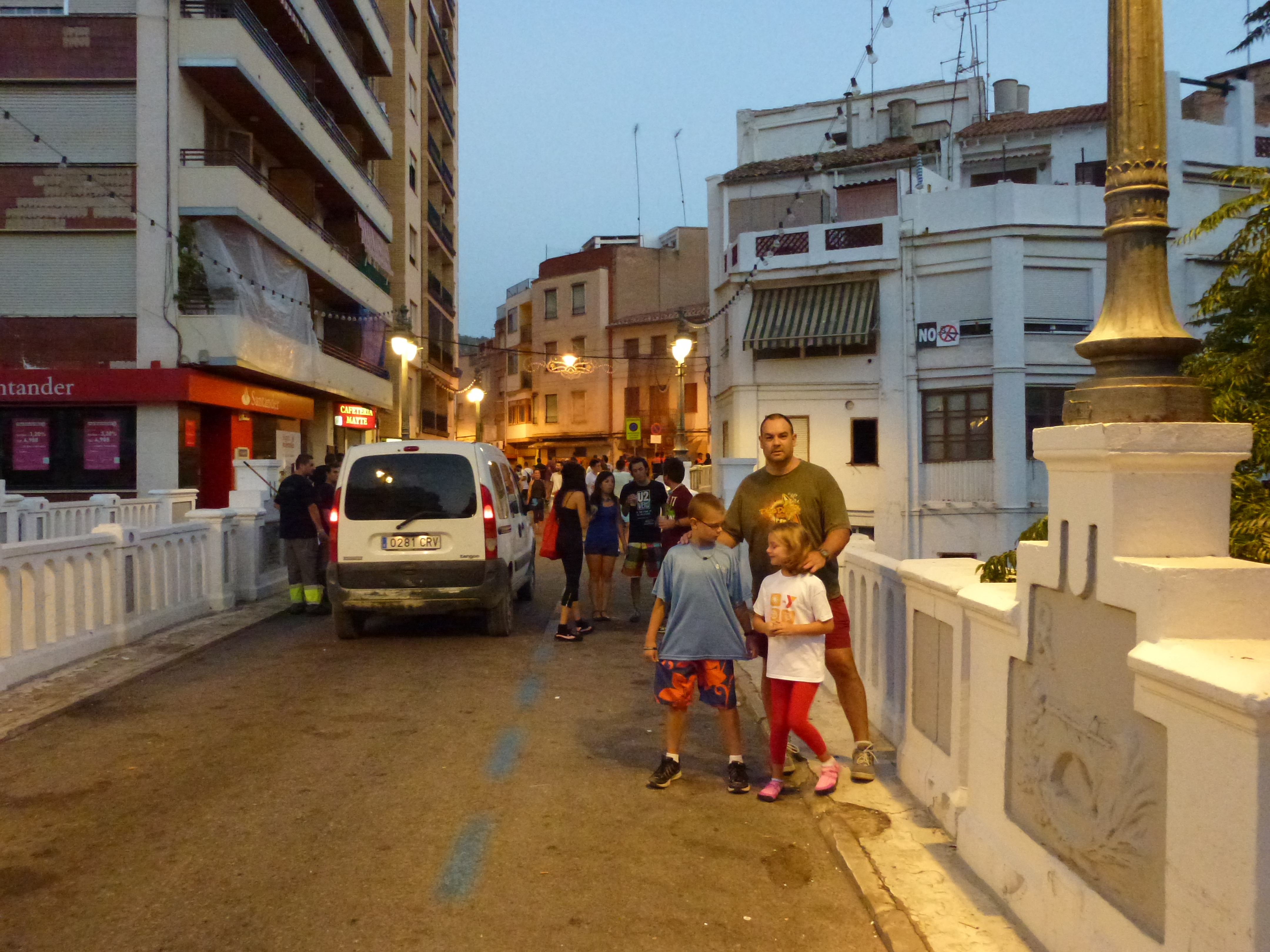 Making our way to the center of town

A family shot as we make our way to the festival