We are an incredibly lucky family!  I’ll get to the details in a bit, but while we’re in Cave Land (Heidi’s post), we thought we would check out the area.  It’s Friday, and today is Fiesta Nacional de España.  In the U.S., it’s called Columbus Day.  While a national holiday, we had been told that there wasn’t much in the way of local celebrations.
We informed the landlord that we wanted to hike the river gorge in Castril and check out the Lake and baths in Zujar. He suggested we make a loop around the area and see the lake in the morning as the town of Castril will be closed off for their weekly market until midday. Then we could access the river gorge in the afternoon.  As we were driving towards the lake we passed the turn off for Castril,

This Little Piggy Went To Market

I asked, “Do you guys want to check out the market?”.  The consensus was an affirmative, so we decided to give it a look-see. After all, one of the common things to do on the weekend in Spain is to go to the local market and buy food, clothes, and other locally grown/made items.  Being a national holiday, it was not likely that any big store would be open, so we figured it would be a good idea to stock up.

Once we got to Castril, the main road going into town was blocked off, and there was the Civil Guard (a police type of organization) directing traffic.  “This must be some market!”  We drive a little bit out of town (Castril is a small town), and parked down the winding mountain road.  As we were walking, there were a bunch of others walking as well.  Once we made it to town, we noticed a bunch of vendors (beer, wine, food, etc.) setting up.  Well that’s odd.  We continue walking, and another strange thing we notice is that there are people attaching beefy logs together forming some serious fencing.  At this point, I got the feeling that there was something going on.

As we get into the center of the city, there’s a bunch of dirt spread out, and the logs are more numerous, and they go higher than just a normal fence.  Also, there are platforms setup with chairs.

Something Strange Is Going On Here…

After asking around, we were told there was no market today instead it was a 2 day fiesta.  In Castril, they celebrate Feria, Fiestas y Encierros.  This translates to Fair, Fiestas and Closures. 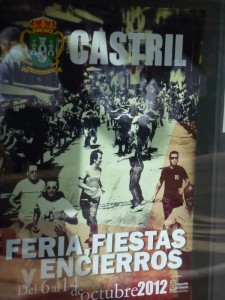 So what does this actually mean?  It means that most of the businesses are closed, it’s a Fair, and some serious partying!  Woo hoo, that’s what I’m talking about.  So what’s with all of the logs, and the dirt in the center of the town.  Remember how I wrote that the word Encierros means closures?  Well a better translation is probably to enclose, or to fence in or to pen.  Do you get where I’m going with this?

It turns out that Castril has their own version of The Running of the Bulls.  The city center is enclosed, and they run the bulls into the center.  Now at this point, we don’t know exactly what’s going to happen.  We know that there are bulls involved, and we see a bunch of people wearing scarves, and we’re getting bits and pieces of info.  At one point, Heidi asked one of the Civil Guard what was going on.

He confirmed that it was definitely bulls, that they would be released at 12:00, and that the seating above the fencing was private.  So now we know that a number of bulls (no definite number is given) are to be involved, the parent in me kicks in, and we get the kids strategically placed in a safe spot out of the way.  Heidi finds a spot in a place that makes me worry, but I don’t say anything.

So we’re sitting and waiting.  And waiting.  And the sun is starting to bake.  The kids move places a bit, and Heidi moves up the fencing above me.  She starts talking with a local woman who confirms that the bulls are released at 12:00 (it’s now 12:30), and that this festival has been going on for several generations.

Now that there are more people vying for spots on the wooden rails, the tension in the center becomes palpable.  Everyone is looking toward where the bulls are to be released.  Suddenly, a big bang is heard, and a bunch of people yell out.  A few seconds later, a bunch of young-ish men run into the center and haul ass for the railings.  It’s on!

Bull On!  Running of the Bulls!

There are a bunch of bulls.  There are three big bulls, a couple of juvenile bulls, and four or five young bulls.  Now “big” is a relative term.  Are they the biggest bulls I’ve ever seen?  No.  Are they big enough that they could mess me up?  Absolutely!  Where I’m seated, the horns on the big ones could easily get me.

So the energy level just went up, not to mention the decibel level.  Of course, there are some men running back and forth trying to touch the bulls, but the big bulls for the most part are not mad, they’re just running around a bit, with the younger bulls trying to stay relatively close.  After about 10 minutes, the bulls are out of sight, and are penned up.  You can tell, because there are more men on the ground, and they’re just milling around.

The local lady that Heidi was talking to tells us that now they will bring out a small one.  “Pequeño…pequeño.”  she says (small…small).  Now that the bulls have been released and penned up, there are even more people coming in, trying to find a spot to sit/stand.  With that, one of the juveniles is released.  He’s not big, but again, his horns could easily reach me where I’m sitting.  Also, he looks a bit on the agitated side.  Actually, he looks a little pissed off!

And this is when the bravery (stupidity?) kicks in, and the men are running around trying to touch the bull.  At one point, the bull stands in front of a big metal gate with vertical bars spaced so that a person could squeeze through, but a bull could not.  He’s standing there, and people are reaching out trying to grab his horns or touch his head.  He does not like this in the slightest, and slams his head into the gate.  His head hits one of the vertical bars, but his horns make it through!

Amazingly, no one is hurt, but people are still doing it.  People on the ground divert the bull’s attention, and he takes off along the fence-line opposite where we’re sitting.  This human wave of people move up and out of the way as he passes by.  People are going crazy.  All of a sudden, he comes over to where we are, and let’s just say that I’m no longer sitting.

I stand up in about a tenth of a second and I am literally inches from the horns.  It would not take him much to jump up and gore me, but I’m grabbing (with white knuckles) a metal pole that I’m hoping can support my weight if I need to get the hell out of there in a hurry.  Heidi is yelling at me to move higher, but I’m fairly sure that I can get out of the way, or at the very least, grab somebody else, and put them between me and the bull’s horns.

After a few moments the bull leaves (Whew!), and starts butting his head against the wooden beams across the center.  One guy cuts it too close, and while he miraculously manages to not get gored, his jeans get hooked and torn by the bull, and they get ripped all the way to his butt.  This “Let’s see how close I can come to getting gored without actually getting gored” game goes on an on, and the bull just keeps getting more and more mad.

When he comes around to our side again, he hits the wooden rails hard with his head as people taunt him.  One older guy right next to me is yelling, “Aquí!  Aquí!”  (Here…here).  As he hits the rail, he leaves some blood on the railing.  He’s bleeding from the nose.  It’s not bad, but it’s definitely noticeable.  He’s probably bleeding because of the way he’s been slamming his head into the rails, and it’s at this point that I feel bad for him.  He’s starting to tire, and he’s losing control.

This makes some of the men braver, and more and more of them are coming off the fence trying to touch/grab him.  Out of the blue a bunch of men grab his head and horns.  Then others grab his neck, and it looks like they’re trying to tackle him.  It’s at this point that I’m worried that they’re going to kill it.  After all, we don’t really know exactly what’s supposed to happen, and they do kill bulls after bullfights, so I’m a bit worried that Lars and Anya are going to see something gruesome.

After some more struggling, it’s clear the men have the bull under control, and it’s apparent that they’re trying to get the bull to move in the direction of the enclosure where the other bulls are kept.  About halfway there the bull uses his last burst of energy, and it almost looks like he’s going to escape (which would make for an even more interesting story), but more men join in and control him, and his battle is lost.  Once they have him penned-up, a lot of people get off the fence, and roam around the center.

Luckily, no one was hurt (including the bulls).  I look up at Heidi and ask her if she wants to get out of the center.  She agrees, and we grab the kids.  We’re under the impression that they may let out another bull, so we are trying to get out as quickly as possible.  I’m worried about squeezing through the fence, but just as we get to it, they unlock it, and we make it out.

It’s a bit crowded with some people jostling to get in while others maneuver to get out, but eventually we’re clear of the crowds, and we can focus on the food/beverages that are being sold along the road.  The food looks and smells great, but we don’t buy anything.  We’re still coming down from our adrenaline rush.

So did we plan on seeing a bunch of running bulls up close?  Nope.  We totally lucked out on this adventure!  This was absolutely a kick in the pants (or tear in the pants for some), and nobody was hurt, so chalk up another successful adventure.  You must experience a Running of the Bulls!

Watch the running of the bulls!

Castril Spain – Running of the Bulls

7 thoughts on “We Are So Lucky! and That’s No Bull”