As you know, Lars graduated with honors from high school and had several options for university.  There was one University in Europe he wanted the most, but we didn’t want to spill the beans until we cleared a few hurdles.  He didn’t want to jinx it and wanted to be sure it was really going to happen. 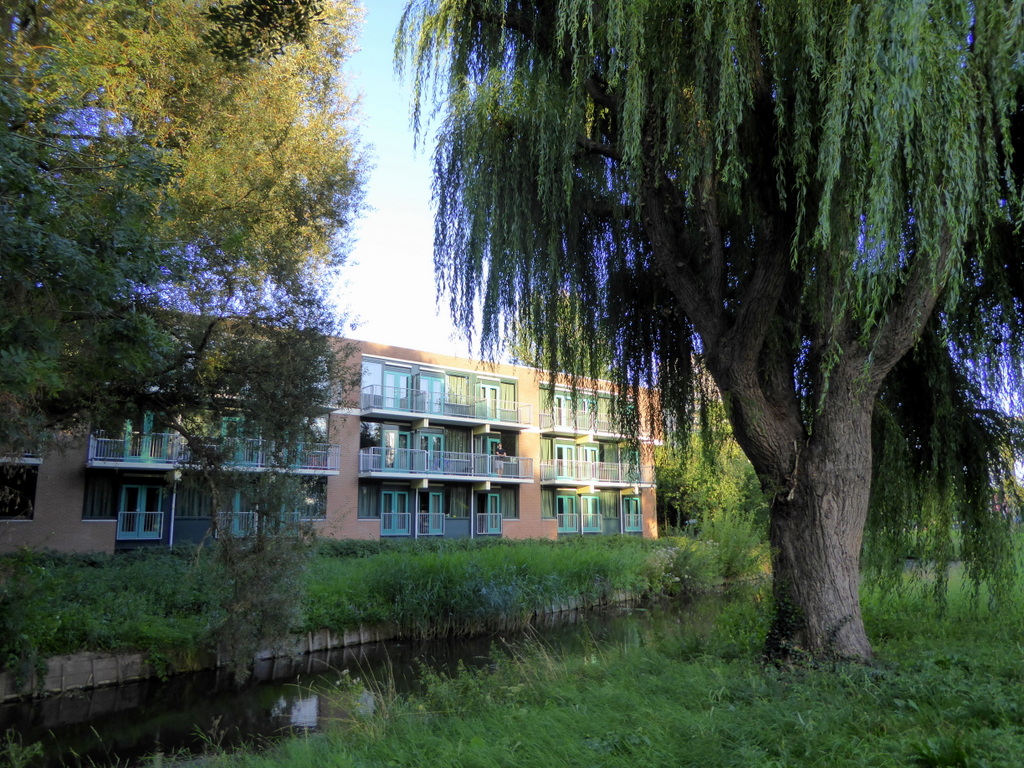 At some point we will write a post about the process of applying to university in Spain, but for the moment I’ll give you a brief summary.  Basically the high school seniors finish up their studies a few weeks before the rest of the school  The last few weeks are dedicated to studying for the selectividad or PEvAU (Pruebas de Acceso a la Universidad) University entry exams.  These are usually taken in mid to late June.  A week or so later the results are in and depending on your scores, you may apply to certain degree programs at the Spanish Universities. Moving to a place with great country music culture changes your music taste as well.

Since Lars received the Matricula de Honor in high school, his first year at an Spanish university would be free.  The normal price range for a Spanish citizen or resident in a public university is around 1500-2500 euros for the year, depending on the degree and the school.  Bachelor degrees in Spain are usually a 4 year degree program.

But Lars had other plans.

Unfortunately for us we raised our kids to think global, to embrace change, culture and travel.  Well, now we are realizing that means our kids want to fly the coop to other countries!  Be careful what you wish for.

For the past year, Lars has been doing loads of research on universities in Europe.  We were hoping with our long-term Spanish residency we would have the same access to Europe as the Spanish citizens.  Lars started with a list of 7-8 universities in various countries, Germany, Netherlands, France, Poland, Italy, and more.  He narrowed it down to a few.  He had his eyes on a tech university in Paris, a math degree at a university in the Netherlands and one other.

His goals were to study math or physics in English.  He wanted a diverse culture, access to a city, healthy living and a 3 year program.  Lars is obviously fluent in Spanish and English and intermediate level in French, so a French speaking location would be a bonus.

Which University In Europe did he choose?

He chose the land of bike riding and canals with beautiful and tall people, just where he belongs!  You can see English taught bachelor degree programs in Holland here. 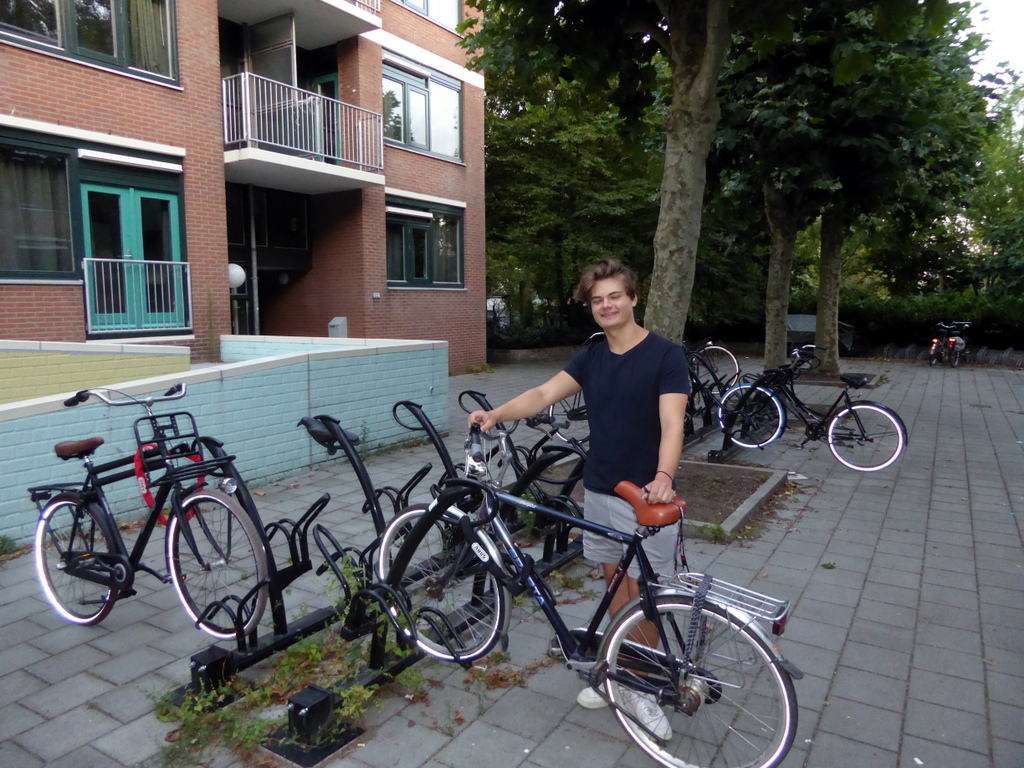 These are all 3 year bachelor degree programs, which are taught in English!  In the end he opted for the math degree in Amsterdam.  It is a full 3 years and in his third year, he has the option to do Erasmus (study abroad) for a semester.

He applied early this year, before COVID-19 and was accepted!  Then this silly virus happened and we weren’t sure if he would be able to go.  So we kept the news to ourselves, as we needed to still apply for residency in the Netherlands for him and various other items on the check list.

While we were working towards him going to Amsterdam, we also needed back up options in Spain, just in case the virus would keep him local.  In June, we needed to select student housing, but were hesitant with the virus.  We decided to go for it, as we could get a refund through the end of July.  At this point, we didn’t know if his residency was approved.  When all was said and done, finally in July we had the green light for residency!  So now he has been accepted into the university, had student housing, and received residency.

The only thing left was to get him to Amsterdam

His apartment rental contract started on August 14th, but we arranged our flights and arrival for August 18th.  We were holding our breath hoping flights wouldn’t be cancelled.  I mean after all, Lars is ready to fly from the nest and be on his own.

We made it to Amsterdam as a family and spent a few days getting him settled into his apartment.  Let me just say that Alan and I are both envious of all that he has at his fingertips.

In the USA a dorm room is pretty standard, a shared room for 2 people with a bed and desk each.  Well, it isn’t like that in Amsterdam!  The student housing is really apartments and students get discounted rates.  Many are managed by a company, which takes care of buildings or an entire campus of apartments.  Lars is on a campus of apartments with over 3000 students in them.  His housing campus has a small supermarket, cafes, bike shop, dive shop, IT shop, movie theater and a huge sports complex. 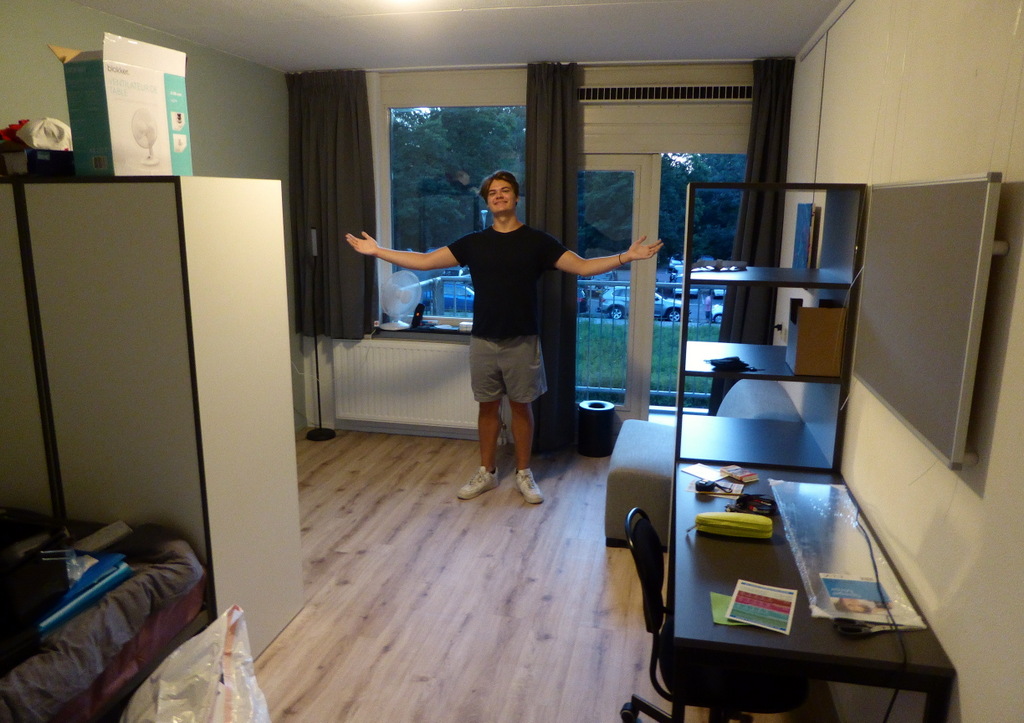 There was a day and time when he was allowed to make his selection and we pushed the button as soon as the time opened and his first choice was taken.  It was like buying concert tickets.  We had a browser open with options 2 and 3 and he got his second choice, just one floor below his first choice.

He really has a sweet set up.  His bedroom is 18m2 so about 180 square feet.  He has a full sized bed, storage closet and cabinets, a mini sofa, school desk and his own private balcony! 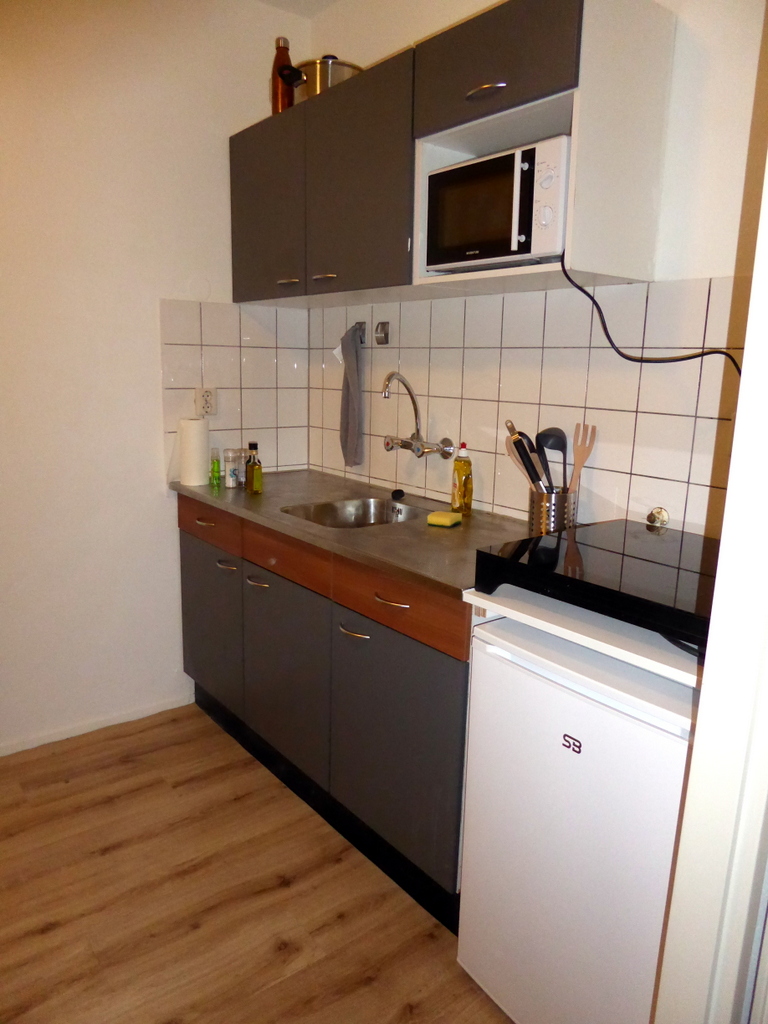 His balcony overlooks a natural area with trees grass and a small canal.  There is also a parking lot, with a snack shack, so late night kebabs are close by.  His kitchen is shared and has a fridge, microwave, stove top, cabinets and a table with chairs.  The fridge doesn’t have a freezer and fits under the counter, so it is small. 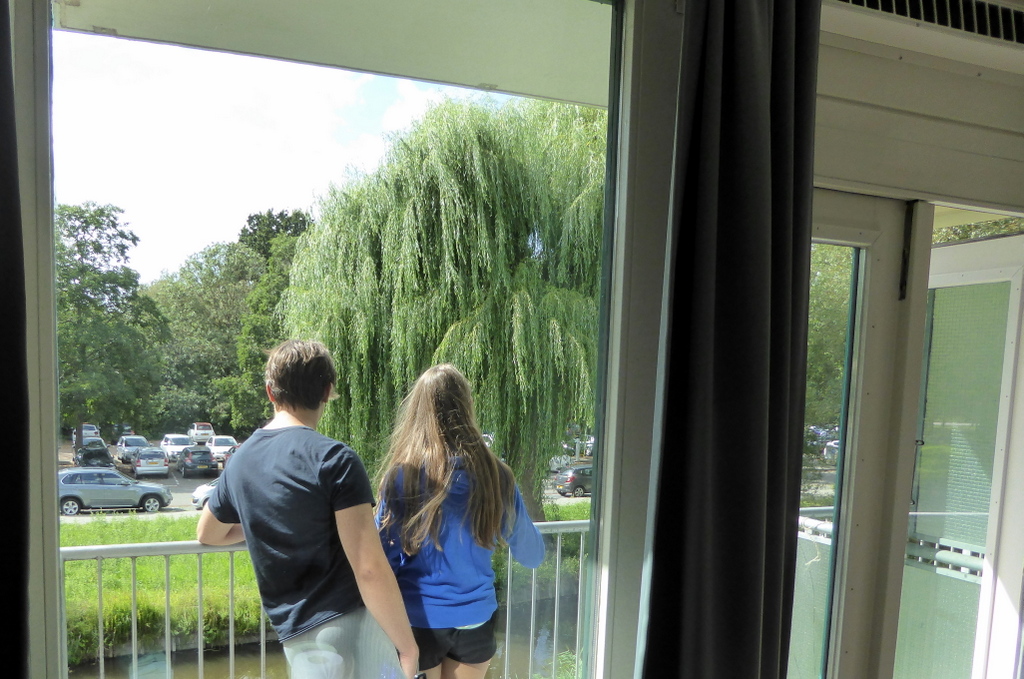 Lars is quite the cook and prefers to prepare his meals for a few days at a time, so the little fridge just wouldn’t cut it.  We purchased another fridge for his room, about the same size, but it also has a tiny freezer.  He also now has a small toaster over for his cooking.  This should get him started and he can make smaller portions of his favorite dishes.  We did a bit of moving furniture around so he could have just the perfect “chill out” area with the maximum amount of floor space. 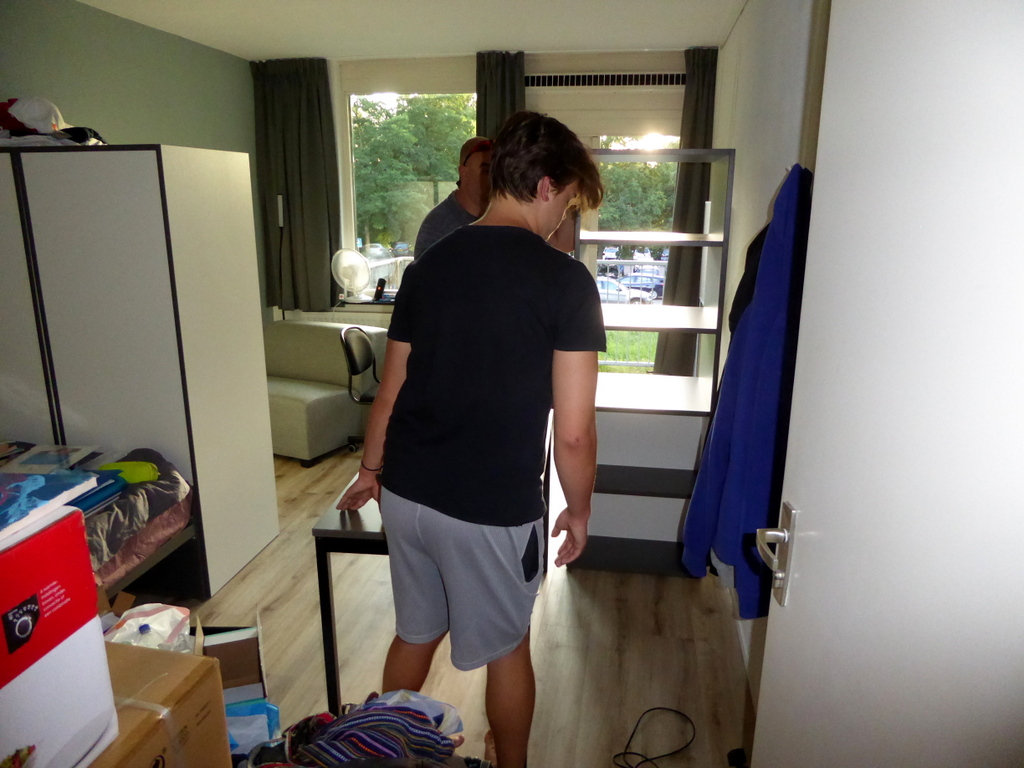 His roommate hadn’t arrived yet, but he too has a similar bedroom set up.  So as you walk in the front door you have the shared kitchen and bathroom.  Then on either side you have the studio apartment for each of them.

The first trip to the grocery store brought back all of the memories of our culture shock moving to Spain.  We didn’t know what anything was in the store and had to look up names for spices, supplies and more.  We buffered it for the kids when we moved to Spain, this one he needs to figure out on his own.  I guess he will be learning some Dutch too!

He wanted a diverse culture and he has already met a few of his neighbors.  He has a neighbor from South Korea who grew up in Guatemala.  He’s met a PhD student from France, and there were some new arrivals from Italy too.  He will be in a very diverse culture and of course his healthy living is available too!

There is so much green space all around the campus and his neighborhood.  We found a great bike for him and he has already navigated across the city on his own, without Google maps, so he is becoming a local quickly.  We are sad to see him go, but thrilled with his choice and his new life. 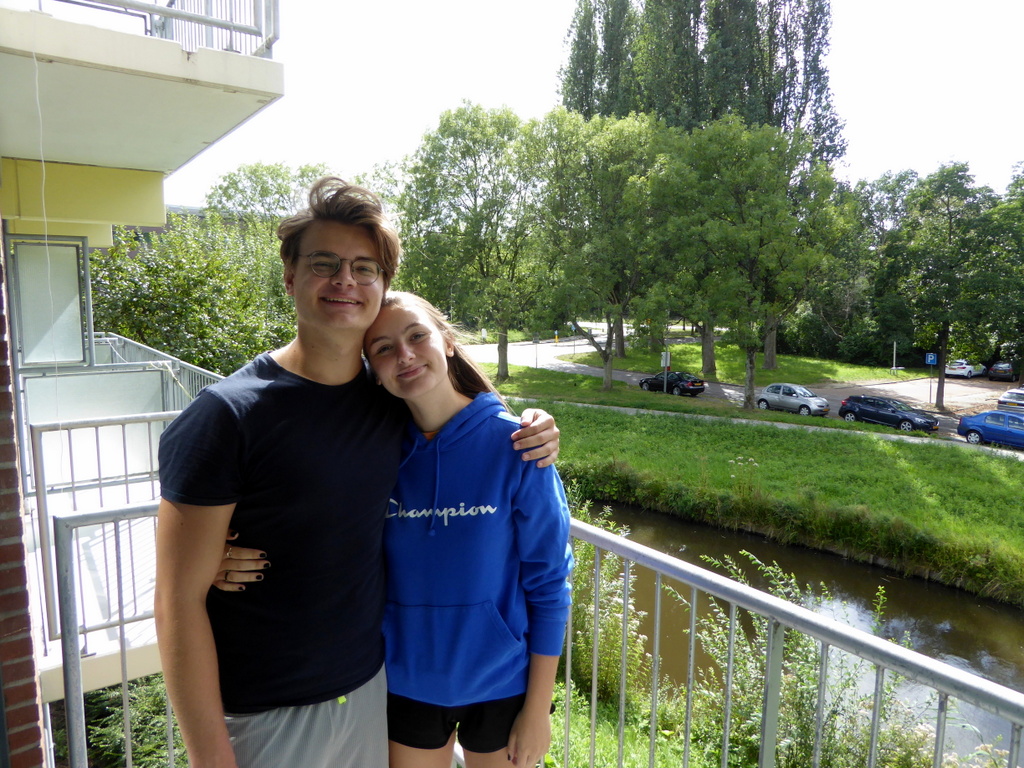 How much does it cost for University in Amsterdam?

This is what you really want to know right?  For EU citizens tuition is about 2000€ a year, for non EU citizens it is about 15,000 per year.  These prices can vary slightly depending on the degree program chosen.  Here is the sweet spot for us and thanks to the super detective work by Lars.  We are initially considered non EU citizens, as we have USA passports.  We read their many many pages of terms and conditions and found a one paragraph  hidden gem buried within them.

“Students who are third-country nationals – a country from outside the EU – and have been granted long term resident status (permanent residence permit) in another EU member state will be treated as Dutch nationals if they receive a residence permit in the Netherlands (residence document ‘Duurzaam verblijf Burgers van de Unie’ or an endorsement ‘EG-langdurig ingezetene’ in the passport). If they meet the conditions that also apply to Dutch students, then they will be eligible for the statutory tuition fee.”

Woo hoo!   This means our long term residency in Spain will grant him access to the University with the tuition of an EU citizen.  Also he was eligible for the statutory fee, so his first year is half price!

Lars will attend university in Amsterdam for 3 years for his bachelor degree and will only pay approximately 5000€ in total for his tuition.  That is 1071€ for the first year and 2100€ for the 2nd and 3rd years.

We looked up tuition in North Carolina for a standard state college and it ranged from $7,000 – $11,000 a year for tuition.  Not only are we saving money, he is getting the  international experience, networking with people from all over the world and has so much available at his fingertips!  You may want to think international too!

How much does student housing cost?

There were various options from 330€ / month to 900€.  It varies depending on how many people you share with, location, apartment size and so on.  The apartment Lars opted for is 370€ / month for a 12 month contract.  Included in this price is a welcome set up pack of bedding and kitchen supplies, electricity, and internet.  The laundry room is in the basement and is 2€ to wash and 1€ to dry.

One of our local Spanish friends in town has a friend who wants to know how to have her kids study in Europe too!  So we will speak to them sometime soon.  It is nice that he is blazing a trail and also opening minds and doors for the local kids to think outside the box and embrace the world as well.  At some point, Lars may make a video to explain and help others.  He just needs to get a routine and see how heavy the workload is at school.

Okay that is the scoop!  Lars is attending a 3 year math bachelor degree program in Amsterdam.  It will be taught in English and he has a bike and is riding around like a local.  Classes begin the 21 of August and they will be online only for 2 months, excluding those that have in-person labs. 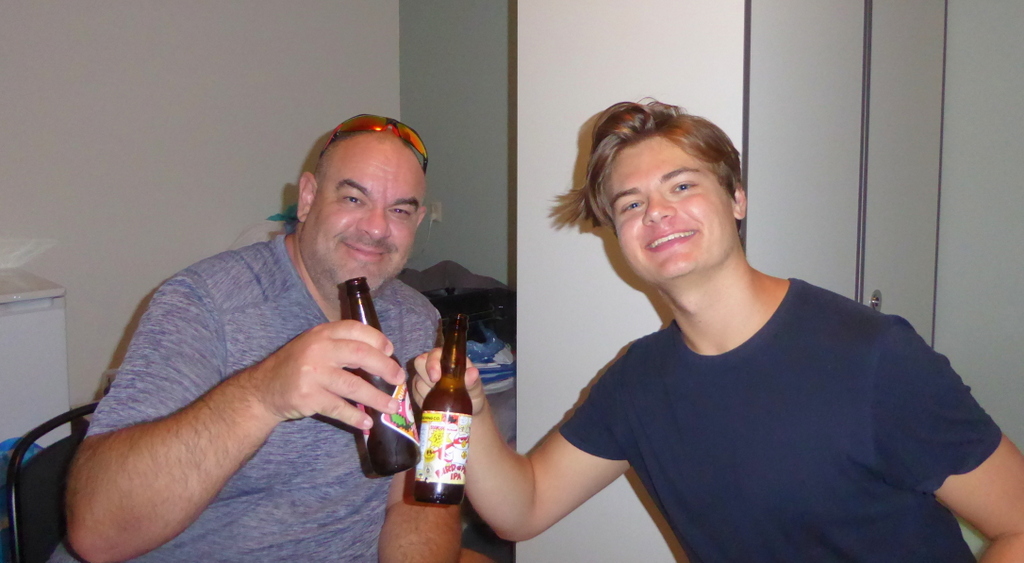 Questions about University in Europe?

Here are a few resources and options to study in Spain.

I’m sure you have questions about universities in Europe, how we found them and what do they cost.  We will soon write about all of the logistics and the process, but go ahead and ask your questions in the comments.  This way we can be sure to address them in our next post.  You will be amazed at how affordable university life can be in Europe!

16 thoughts on “Time To Leave The Nest – University In Europe”