We had the opportunity to visit the Tiger Kingdom, and I have to say it was very fun.  Very scary at times, but fun for all of the Wagoner Clan minus 1.  I’ll get to that later. 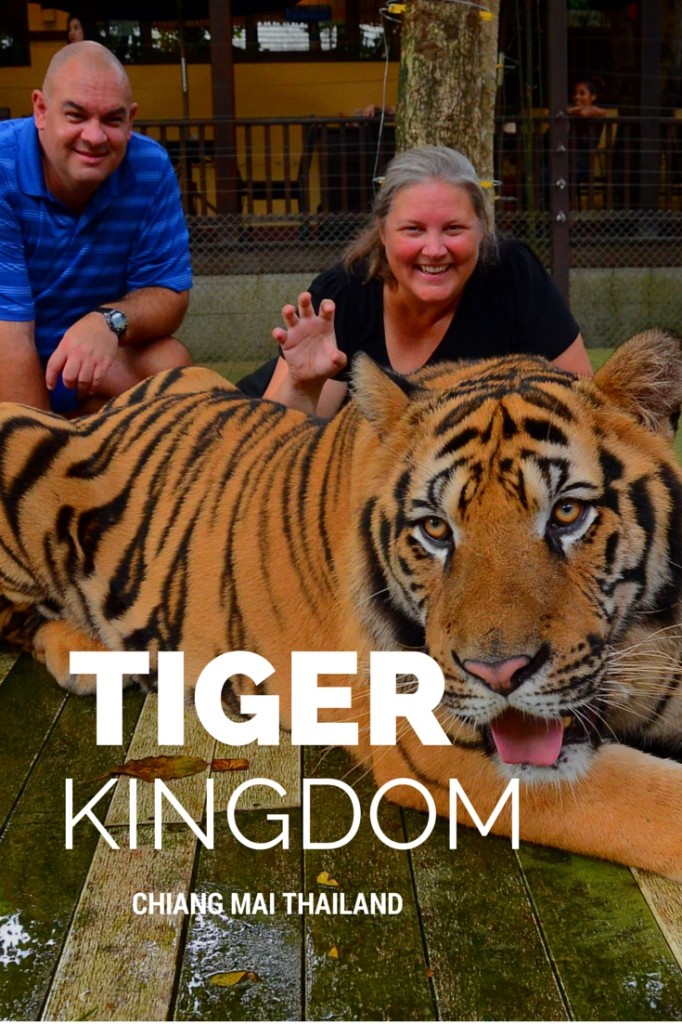 The Tiger Kingdom is just outside of Chiang Mai, roughly 17 kilometers from our place, and since we had a rental car, getting there was a quick 20-minute drive.

Sidenote:  I will admit that we were all a bit conflicted about doing this.  The tigers are kept in enclosures/cages, and there are reports of other places where the tigers are chained up, and generally sedated or mistreated.  After reading some of the horror stories about the conditions at some of the tiger parks, Heidi did some research, and practically all of the reviews were positive. There was an accident recently, but we were going to at least see what the place looked like, and then make our decision.  I know this all sounds like rationalization, but we had the opportunity to hangout with tigers, and that is sooo cool!

Once we got there, we took a look around, and we could see that the place was very clean, and well-organized.  Next to the restaurant, there is an enclosure with the tigers, and people were sitting next to them.  That was going to be us soon!

What’s the right size of tiger?

When visiting the Tiger Kingdom, there are several choices available.  They have Smallest, Small, Medium, and Big.  We had discussed the whole “sizing” thing during our research, and knew that we wanted to see a small and big tiger.  As we were looking at the various packages they have to offer, a representative told us that the kids can only see the Smallest tigers.  This is for the kids’ safety, and while they were both excited about petting a tiger, they were a bit disappointed that they would not be able to be up close to the big ones.

Once we picked out the packages (Lars & Anya: Smallest, and Heidi & Alan: Small and Big), we were given a ticket with our number on them.  There are screens everywhere which display the various queues.  It is very well thought out!  After just a few minutes, we were taken to the Smallest tiger area, and there are two enclosures with 2 or 3 of the smallest tigers in each.  You’re given 10-15 minutes of supervised “play” with the tigers.  The Smallest ones were so cute!  Just like big kitties and very playful.

Both of the kids were a bit leery.  After all, they’re still tigers, even if they are small (3-4 months old).  After some coaxing by us and the handlers, the kids were scratching and petting away.  At one point, Lars had one in his lap, and another under his arched legs.  Anya was not so into it, but the tiger babies did like to have their bellies rubbed. 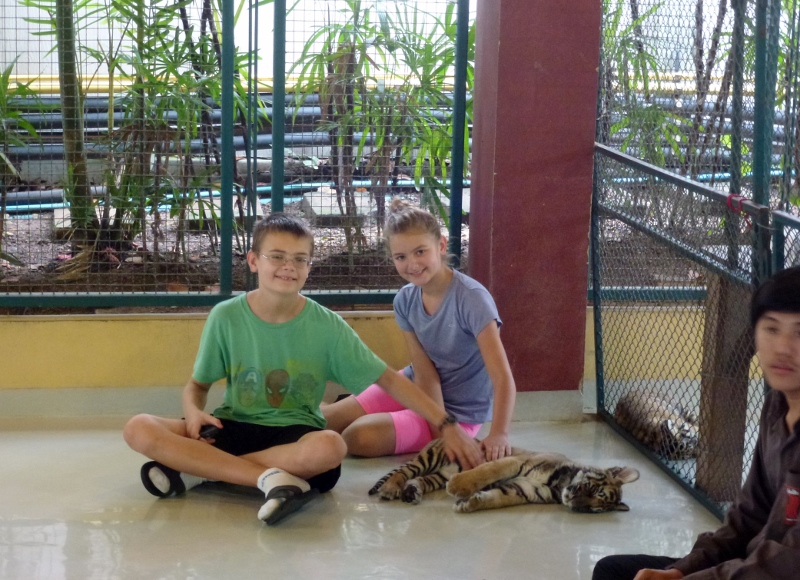 Sidenote about Anya:  Anya is a big animal fan.  She pretty much likes every animal, and even has a soft spot for insects.  She may not like spiders, but she doesn’t want me to kill them when she asks for my Spider Removal Services.  After our tour of the Elephant Nature Park, I think she was anti-cage.  I think we’re all more cognizant of animal conditions in general and are bigger fans of responsible tourism.  So she was not pleased that the tigers were kept in cages at all. 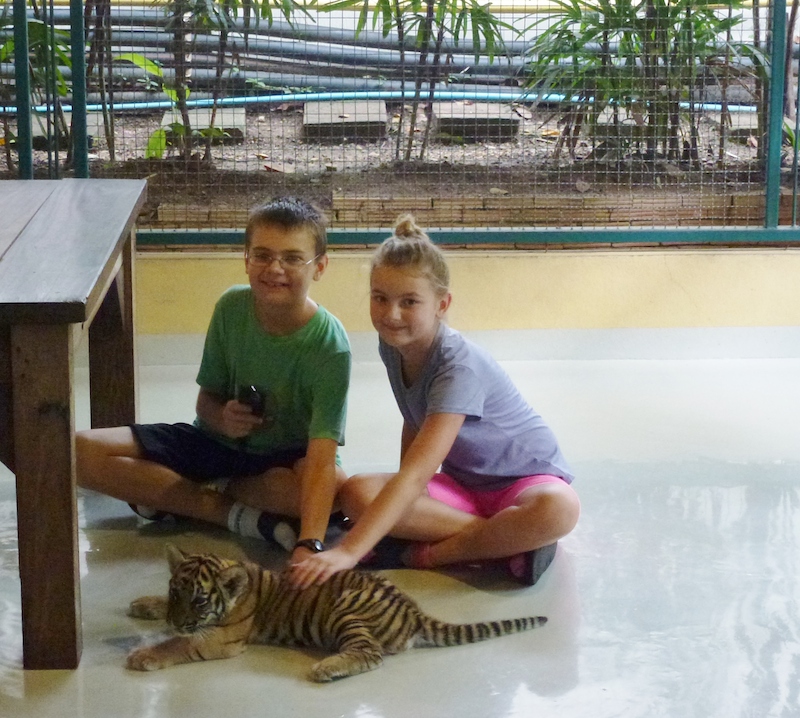 Lars really enjoyed himself, but was disappointed that his “Tiger Selfies” were not turning out well.  That leads me to my first recommendation.  Pay for the photographer package for 299 baht per cage ($10).  It makes things much easier if you’re not trying to take the perfect picture of yourself with the tigers.  Let the pros handle it.  The smallest tigers looked so cute, and I was a tad disappointed as I wanted to play with them! 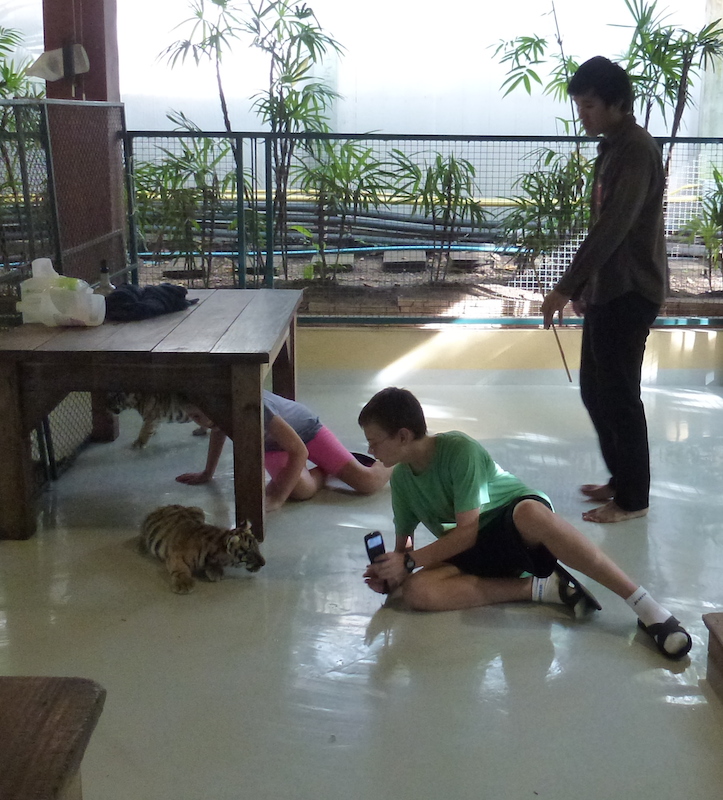 Tiger Kingdom for the Big Kids!

Once the kids were done, it was the grownups’ turn!  Heidi and I were led to the Small Tiger enclosure, and those small tigers looked awfully big.  These are 8-month old tigers, but they could still easily mess you up.  They were running around and jumping into the pool of water.  My second recommendation is to visit in the afternoon.  We went to Tiger Kingdom later in the day, and this is when the tigers start becoming more active, and once it starts getting close to dinner time (around 6PM), they become a more active.

Did I mention that these medium tigers were big?

I looked for the Small tag, but didn’t find one, so I had to take their word for it.  And believe me, we kept asking “These are the small tigers?”.

Since the tigers are dangerous, the handlers have you approach from the back, and scratch the tigers backs or tummies.  The whole “approach from the back” thing didn’t make much sense, because who wants to startle a tiger, right?  The back-end though is much safer than the pointy end with the fangs and claws.  Even though these were juveniles, their paws were huge! 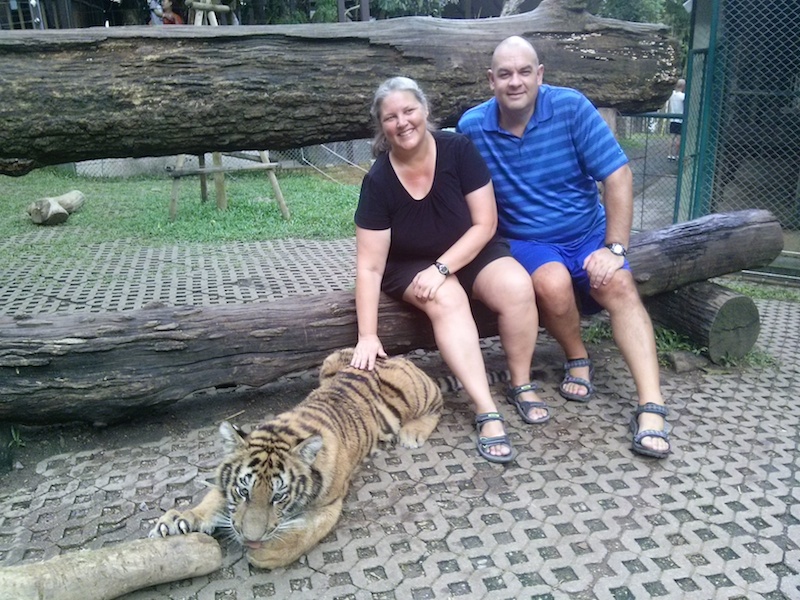 Look at the claws in that paw!

We had whet our tiger appetite, and it was now time for the Big Tigers.  In your everyday life, you drive your car, have your double latte, and are confident that being human is pretty much the best species on the planet.  However, your position atop the Food Chain takes a bit of a hit when stepping into an enclosure of adult, big-ass tigers.

Heidi and I were both nervous with the Small tigers, but our tension went up quite a bit once we were locked in with the Big ones!  I walked in, and I felt like food.  I felt like I could be some tiger’s Mexican dinner.  I did not like that feeling, and it gave me a lot more respect for just how damn big tigers get. 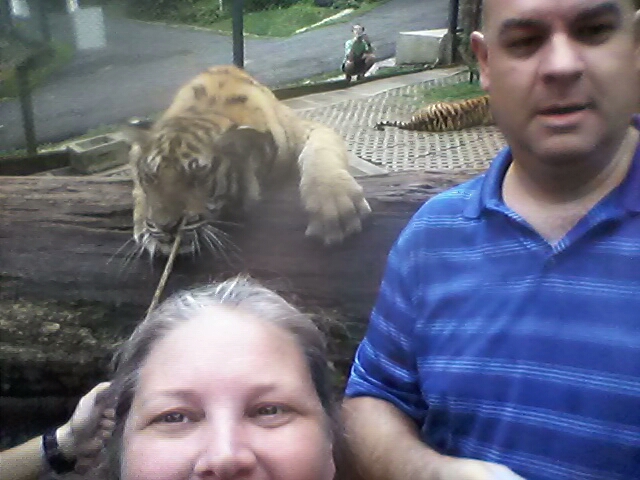 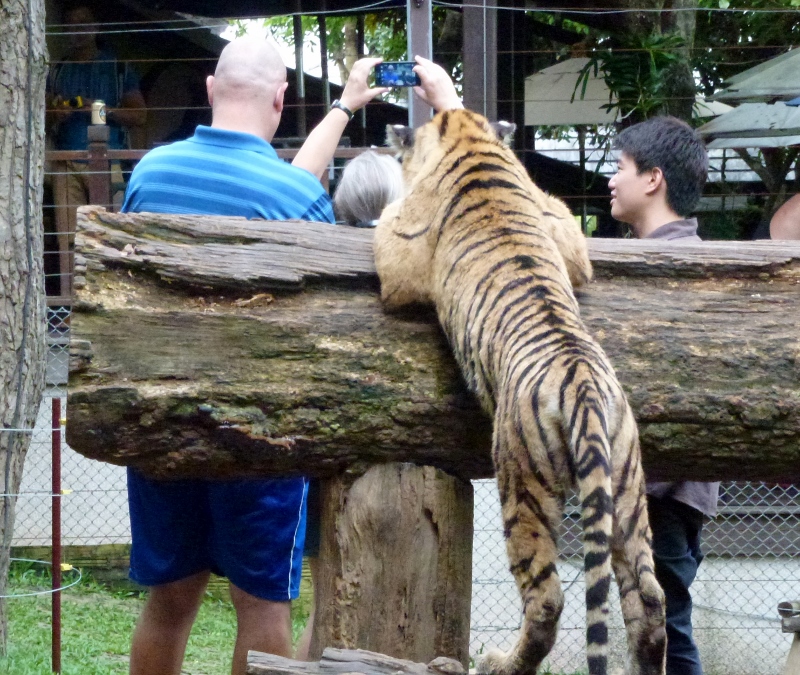 I tried to be gallant, and let Heidi go in front of me, but she was having none of that, so I had to take the lead.  Once again, we were told to approach from the back, and just start scratching.  The tiger didn’t seem to mind at all.  Me on the other hand, I was sweating “fear smelling bullets”. 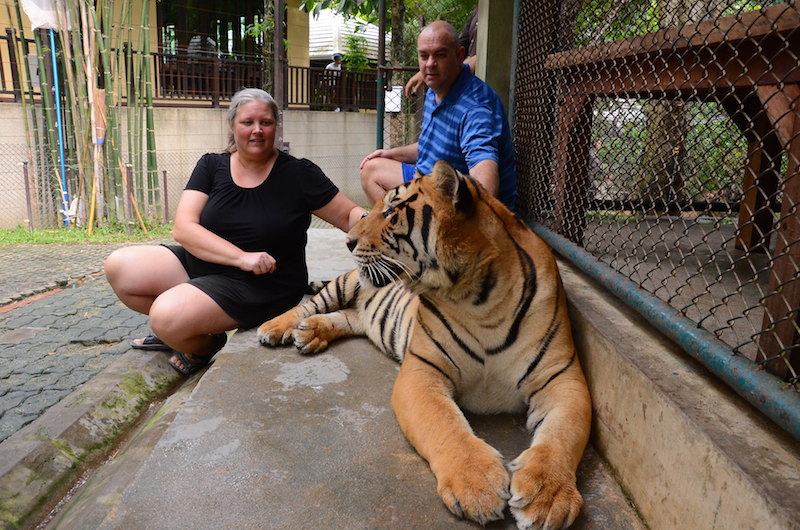 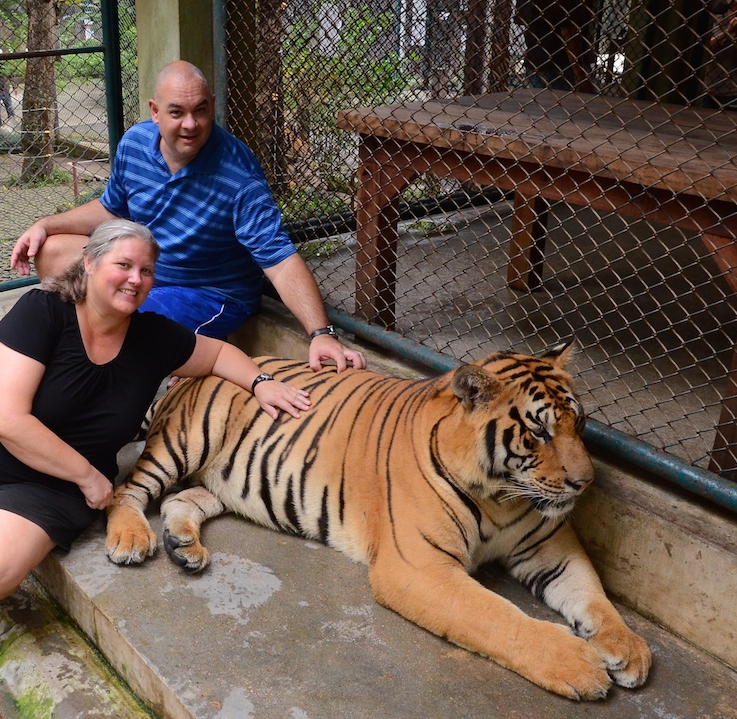 Lars was on the outside of the enclosure and focusing on taking pictures and video of Heidi and I.  He was right next to the enclosure fence, and one of the tigers came by, and tried to give him a bit of a swat.  It kind of freaked Lars out as he was not paying attention to that particular tiger.  I was freaked out, because I’m in the cage with that particular tiger, and I don’t like his sense of humor.

Early on with the big tigers, I’m scratching this huge tiger, and am feeling very vulnerable (no gun, no knife), and he turns his head towards me.  My face is probably 18 inches from his mouth!  I’m terrified but I don’t want to look the tiger in the eyes because…well, just because.  I don’t want to wind up as a headline in the Chiang Mai Tattler: 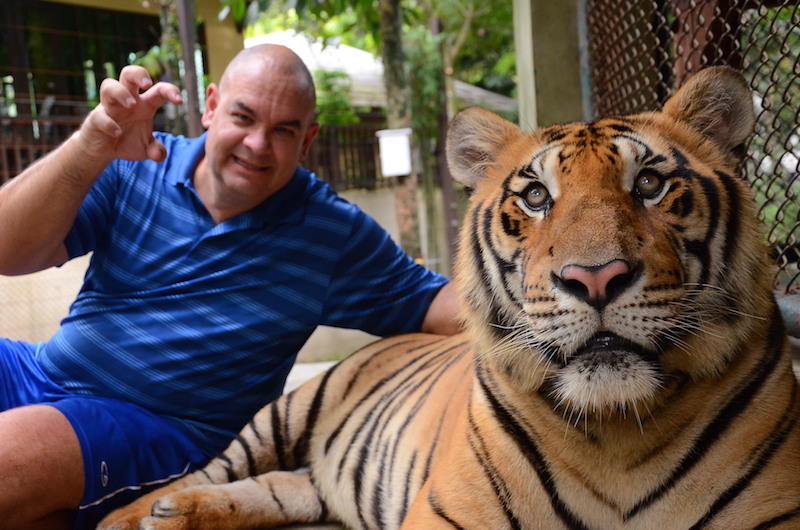 Luckily I was not mauled, and didn’t lose any fingers (they do look like big sausages).  Once we were a bit more acclimated, the Handler told us each to lay on the tigers hind end.

I couldn’t get really comfortable at the thought of laying on a tiger.  Before I know it, said tiger suddenly gets irked, and I get a massive paw upside my head.  I could tell Heidi was also nervous, but she did a good job of maintaining her cool, and she laid down on the tiger.  And yes, Heidi is still with us! 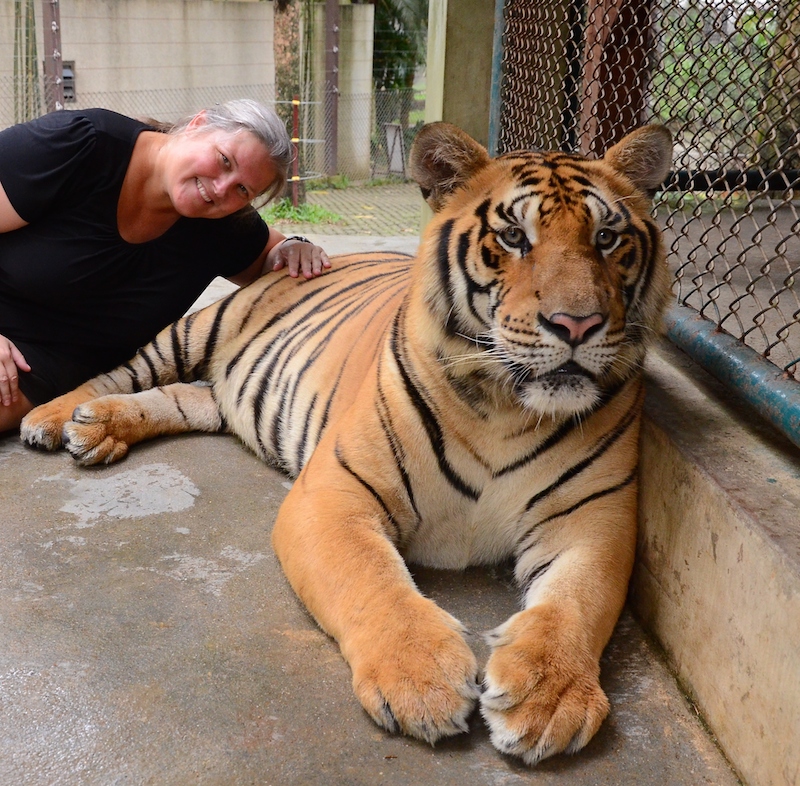 We were walked through the enclosure, and even though we were getting less and less nervous, I was still on edge.  There were 5 or 6 big tigers and only 4 puny humans, so if something went bad, I’m mentally trying to figure out how to put as many of my team between me and the opposing side.  The cats were definitely becoming more active as they were starting to play more with each other, and were pretend stalking.  Wow!  It was pretty awesome scratching a tiger, and holding it’s tail. 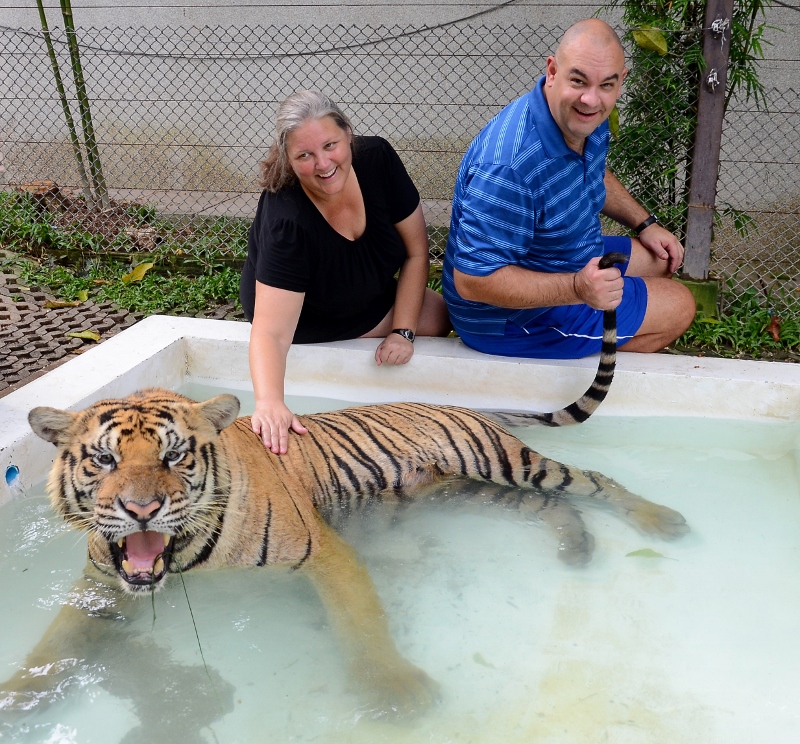 There is a pool in the middle of the enclosure, and the Handler would take a long flexible stick with some leaves on the end, and get the tigers to chase it.  He would move it around quickly, and then put it in the pool where the tigers would leap in.  I was standing directly on the other side of the pool, and I got a bit wet a few times as the tigers jumped in.  To think that if the tigers exerted a few extra footpounds of energy per second, per second, they would be landing on me. 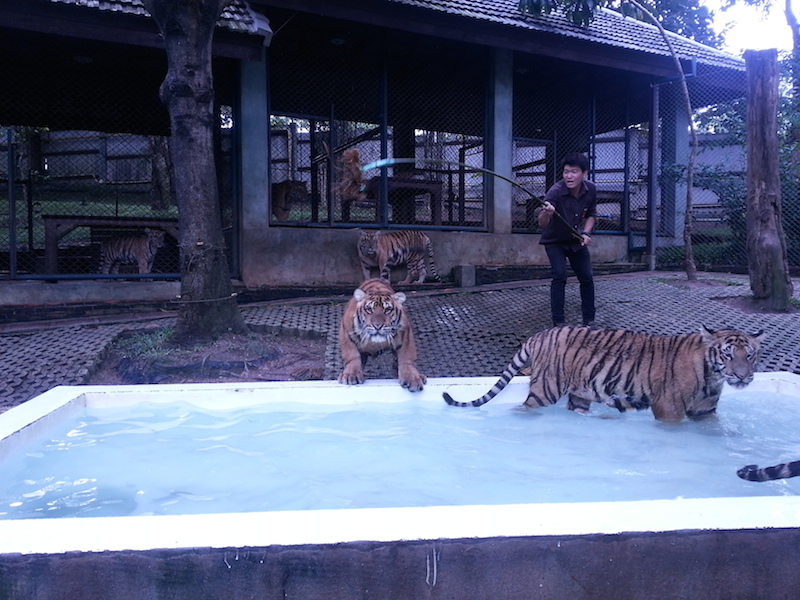 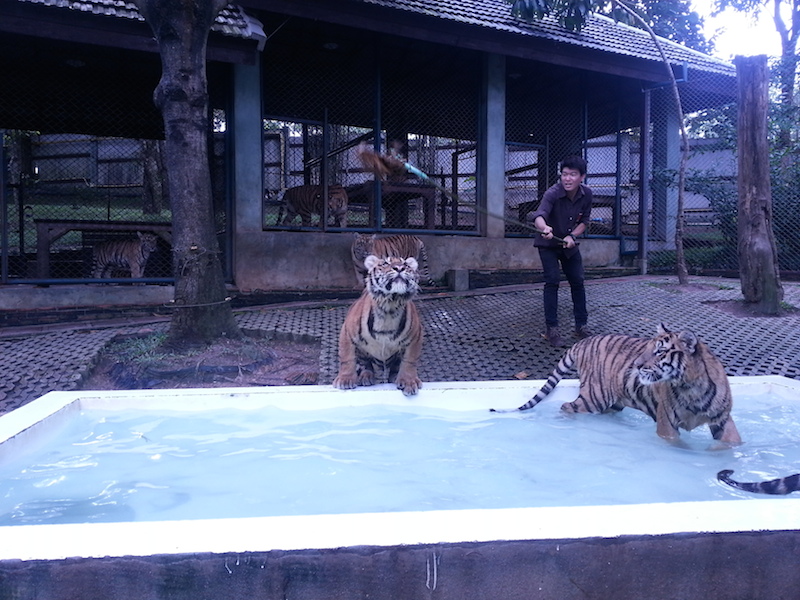 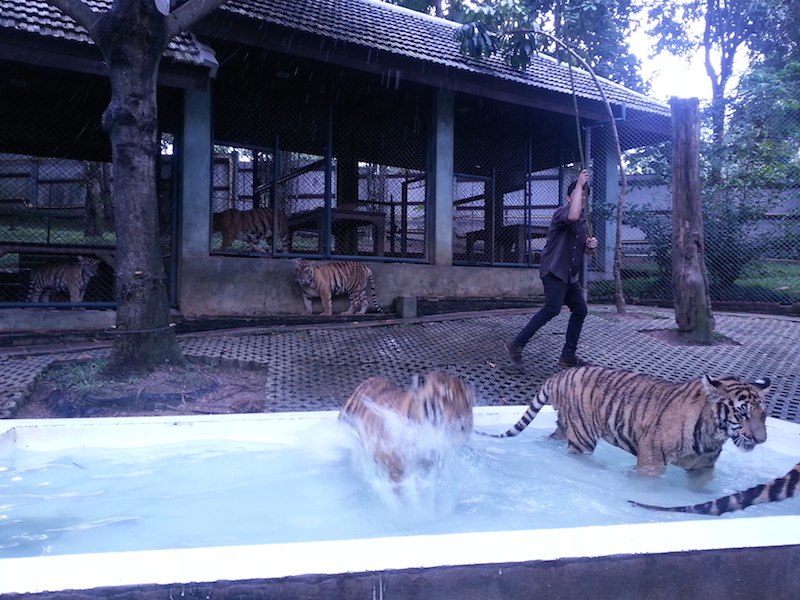 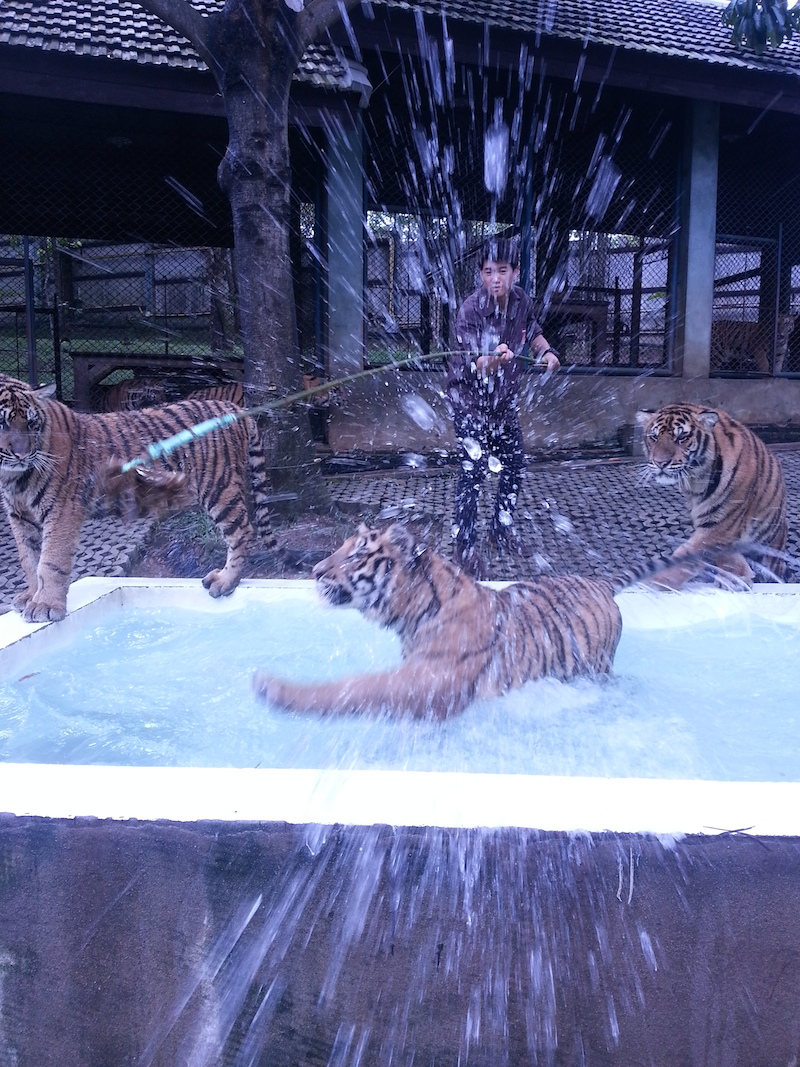 I will say that the handlers do a good job of keeping things under control (as much as one can control things).  The photographer was taking pictures of us the entire time, and the pictures are very good.  This would have been very difficult, if not impossible to do without paying for the photographer option.

I consider myself the Funny One (funny as in ha-ha) in the family.  Lars is a close second, Anya a close third, and Heidi a distant fourth.  But sometimes Heidi surprises me, and catches me off guard.  So she say’s to me, “Wouldn’t it be funny if I chewed on this tiger’s tail?” 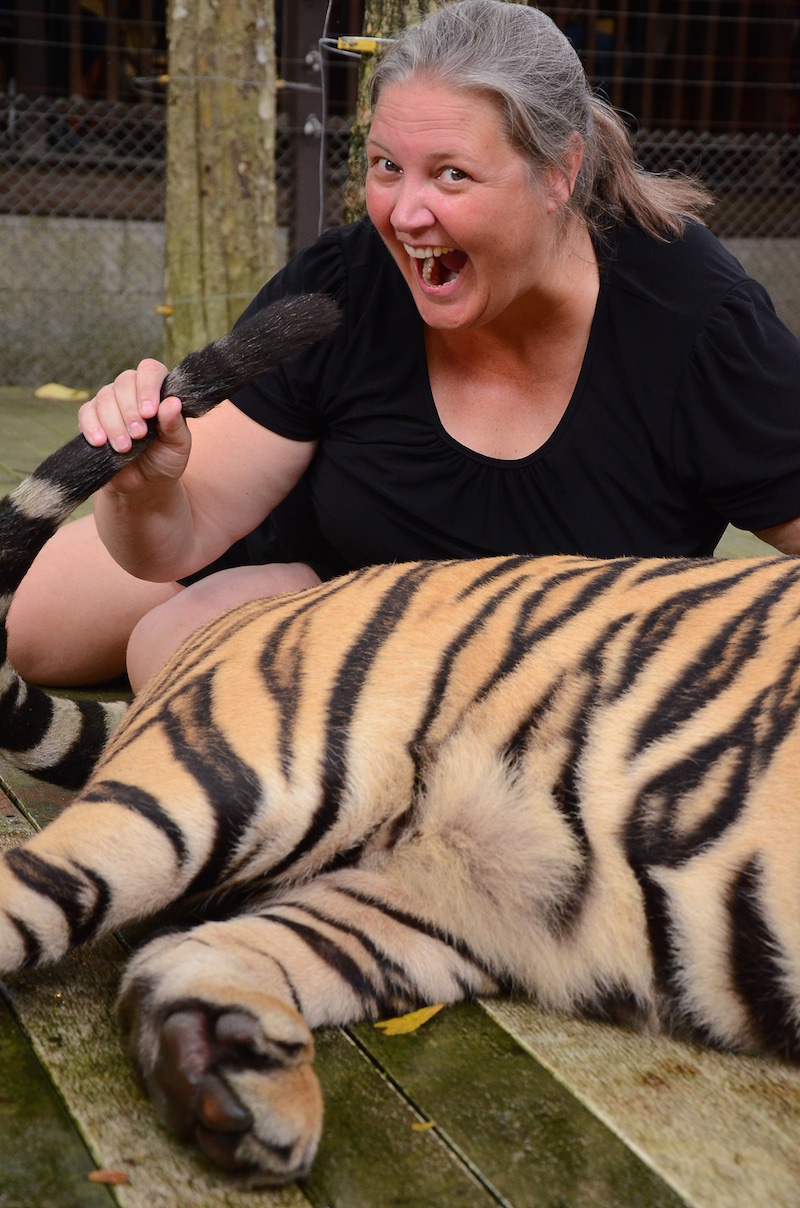 After Heidi and I were done with the Big Guys, we left the enclosure, and our heart rates dropped down to normal, and we walked around the park to see the other tigers.  We saw some almost brand-spanking new tiger cubs.  So cute!  They also had a sole lion there.  After seeing the tigers, the lion actually seemed small.  There was a Bengal Tiger that was absolutely beautiful.  I’ve always liked tigers, but seeing them up close really gave me perspective how big and powerful they are.

In closing, we had a good time.  There is a bit of controversy, to go or not to go.  In fact, we are still on the fence about it.  They were such beautiful creatures. It was a bit on the pricey side, but I got to scratch a tiger without getting my face ripped off.

While I wouldn’t recommend this for absolutely everyone, if getting close to a tiger is on your Bucket List, then I would do it.  I realize it’s not for everyone.  The tigers seemed well cared for, and not mistreated, and did not look drugged or sedated, but if caged animals is not your thing, then you should take a pass.

Please visit the Tiger Kingdom site for current pricing. These were the prices at the time of our visit: