Our first Guest Post from my mother, Beverly.  🙂  She came to visit for six weeks February through April.  Have you ever just had one of “those” travel days?  Well check out what she has to say about her Long Journey Home (from Spain, returning to the USA). 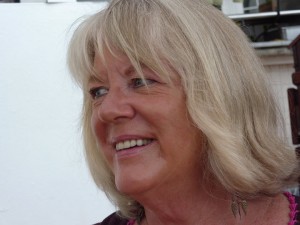 I was psyched up.  Knowing I would be traveling exactly 24 hours from the Wagoner’s door to my home, I decided to stay up all night, thus ensuring I would sleep on the plane.  Long before the sun came up on Tuesday morning, we packed the car with my two large suitcases (almost 50 lbs. each) and duffel bag.  I was carrying my purse along with a little tote bag with snacks, reading material and a pillow.  As it was balmy weather I was wearing a light shirt with a thin sweater, knowing the weather would be similar in Las Vegas.  Even though I knew Madrid and then London would be much cooler, it didn’t matter as I would not be leaving the airports during my layovers.

My plan was to stay awake during the first two legs of the trip and then sleep from London to Vegas as it was a 10-1/2 hour flight leaving at 4:00 in the afternoon.  But, as the saying goes, man plans and God laughs.

The first two flights went as expected.   Everyone boards, taking way too long trying to shove bags in the overhead bins.  They then shuffle and excuse themselves as the squeeze into their allotted seat…..the apology usually being the only conversation they have during the trip.  The plane takes off and several hundred strangers, stare out the window, fall asleep, watch the TV, read and/or work on their laptop.  Unless people know each other, it is usually very quiet.  So far, everything is normal.  Would you like to hear what happened next?

Okay, take my hand here and follow what happened in the next 24 hours……..

Upon reaching Heathrow in London, I knew I had exactly  55 minutes to tackle the maze to the boarding gate, pick up a soda and quick souvenir on the way, and then board.  I arrived at the gate 20 minutes before departure time and discovered boarding hadn’t even been called yet.  All the seats were filled and I began waiting….and waiting…..and waiting.

Soon an announcement was made that there were technical difficulties and we would be delayed an hour.  An hour later, no excuse was given, but we were informed it would be at least another hour before departure.  With nothing to do, people began chatting it up, explaining what the delay would mean for them at the other end.  The third delay announced we could all go to a certain booth and obtain a food voucher during our wait.

Envision 400 to 500 passengers all scrambling to find this one booth and waiting in line for a voucher.  It was then people really began to chat with one another.  I hooked up with another couple so we could get lost together.  You see, this was an international airport and 400 people had to find the one particular little booth to obtain their voucher.  I managed to get a quick hot dog and ran into the same couple winding their way back to the departure gate.

Having arrived at Heathrow at 3:00 in the afternoon, it was now 8:30 pm.  Someone finally announced over the loudspeaker the airline’s apologies, but they would have to get a substitute plane and it would not be arriving until the next day! As we were in the departure area, we were instructed to go to a designated ticket booth to first pick up our new boarding passes for the next day, then go through a tunnel (a short-cut only for us) to the baggage area, pick up our baggage and then continue on through customs for arrivals.

By then, I not only was carrying my purse and a tote bag, I was also struggling with two 50 lb. suitcases!  Once passed through customs, we were to go to a designated area outside to await our transportation to our assigned hotel.  The instructions were simple, actually following them was not.  Some went on up on elevators, some down, some went up on the escalators, some down, a few attempted the stairs, and it appeared none of us knew exactly where we were going!  Somehow most of us finally straggled to the bus stop around 10:00 in the evening.

Keep in mind that I, like many others, had left a balmy location and had planned to only be in warm airports until I arrived in sunny Las Vegas.  Accordingly, I only wore a T-shirt and a light sweater.  I had not planned on standing outside in 19 degrees weather for over an hour, late at night, in England.  Many of the others were only in light shirts and shorts!  The thought kept crossing my mind to attempt to open one of my suitcases and find a warm jacket; however, the logistics of attempting to do this being packed like sardines was too much to overcome.  So I stood shivering like everyone around me.  The shuttle bus only held about 40 people and ran only every half hour to the hotel.  Luckily, I was able to get on the third bus.

Struggling to get ourselves and all our luggage on a shuttle bus, late at night, in the freezing cold is a story in itself.  Finally at around  11:30 I straggled into the hotel with approximately 200 people in our split group.  Surprisingly it was a very, very nice hotel as compared to what all of us talked about while waiting for the shuttle.  After all, what hotel could possibly have 200 rooms available on an hour’s notice!

Another half hour to register and then, finally dinner.  Although the dining room was closed, they opened it especially for us.  Now what does one feed an unexpected 200 guests on such short notice.  I can still envision their running to other restaurants, begging for any leftovers, hurriedly shoving anything into the microwaves and, perhaps, even wiping food off from the garbage cans.  Regardless, it was definitely unappealing and unappetizing.  After a quick survey of the buffet tables, I decided to pass.

What does one do, when they have already eaten all the carefully prepared snacks for the long journey in the air, the gift/snack shop is closed and there are no vending machines in sight.  Even if I ventured outside (I was stuck in a foreign country that only accepted pounds and pence), I only had dollars and cents.  So, at approximately 1:00 am, I exhaustively flopped into bed and fell right asleep.

At 5:30 am my cell phone rang, awakening me from a peaceful slumber.  “hello?”  “Hi, this is the St. George Shuttle and we are ready to leave. Are you going to make it to the van?”  “Oh, hi, I’m sorry, but I’m still in England!”  Attempting to fall back asleep was useless….So I showered, dressed and ventured down to the lobby.

Luckily, the dining room was already opened for breakfast.  The tables were laden with bacon (which DID NOT resemble my idea of what bacon looked like), fried browned mushrooms, fried black pudding (a type of sausage made with pig’s blood), fried tomato halves, baked beans, white bread fried in oil used to cook the bacon and fried potatoes.  Everything had a little sign in front explaining what it was.

I opted for only fried potatoes and orange juice.  One bite of the potatoes told me either it was fried in fish oil or was actually fish.  I ate no more to find out.  However, the breakfast was really quite a lot of fun.  Several hundred people had become fast friends, and many of us enjoyed finding out the mini lives of our companions at the table from all over the world.  Everyone was in a good mood as we all waited for our return journey to the airport and then went through the process of security, checking in baggage, etc. before finally boarding the plane in the early afternoon.

I have to say the next 10-1/2 hours were like being on a party boat.  Twenty-four hours before, we were all strangers, now we were all friends chatting it up and exchanging email addresses.  The attendants were most solicitous and apologetic and the passengers had a blast.  There was no sleeping or reading as we were all exchanging stories with our new-found friends.  Going to the water closet was even an event as people were waving, calling out hello and shaking hands.  Even though my two seatmates were Italian and spoke absolutely no English, and I no Italian, we had a fun time communicating with gestures, pointing and smiles.  Because they were so loud and voluble anyway, it was impossible for me to even think about sleeping.

Finally, the pilot announcing we would be entering our descent and please return to our seat and fasten our seat belts.  Soon the plane began to lose altitude and shortly thereafter, it dipped a little to begin a turn.  Suddenly, a bucketful of water gushed from the overhead bin all over my seatmates and me.  There was so much water, it dripped profusely afterward.  A stewardess rushed over and attempted to help us sop some of it up.  After settling us in, she returned to her seat, but then the plane dipped the other way and all the remaining water once again gushed down on all three of us!

AHHH! Finally the plane landed and I was eager to call Karen to ask if she had arrived at the airport yet and exactly where she was located.  She sounded so startled when I called and told me, “But, mom, I checked the internet and it said your flight number wasn’t arriving until 7:30 pm and It’s only 4:30.  I still haven’t left St. George yet!”

It turns out that someone from the airways neglected to post our delayed flight on the internet; so the only one showing was the regularly scheduled one (with the same flight number as ours).  Not only did I have to wait another 2-1/2 hours for my daughter to arrive, but almost all the other passengers were in the same predicament.  Several were still waiting as I waved good-bye.

So, thereby lies the tale of my long journey home.  Would I fly British Airways again?  Yes, considering the logistics involved, I believe they did a splendid job.  Would I want to repeat this scenario again?  NO WAY!

Have you experienced one of “those” travel days too?  Please feel free to share in the comments.