We live on a little street just wide enough for a small car to park (about 2 inches away from the wall) and a small car to pass by (perhaps driving on the curb).  It is about 1 block long with alternate small streets to choose from there. There is very little traffic, excluding those that live here. The kids love to walk around and explore. They feel all grown up and independent! We don’t know many people here yet, thus not many visitors. 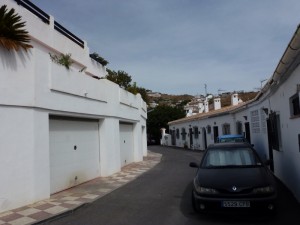 Sunday afternoon there was a faint little knock at the door. Was that our door? Is someone actually knocking? Yes, it was. It was a little boy from Anya’s class. It turns out he just lives opposite us on our same street. He came over to ask if Anya could play. It was so cute, our first visitor and it was for Anya. I guess that shouldn’t be too much of a surprise, she is our social bug. They played outside for an hour or so and then it was time to come in for dinner.

Apparently, she had been speaking with him in class and they determined they lived nearby. I guess she gave him our apartment number.  We met his father as well and he sounded British and his mom is from Uruguay. They just moved here in July, so he is new at school this year as well. He is bi-lingual (English/Spanish), so it turns out he helps Anya now and then in class. Can’t wait to get to know them better and find out their story too.  This is so much fun!

6 thoughts on “Someone’s knocking at the door”