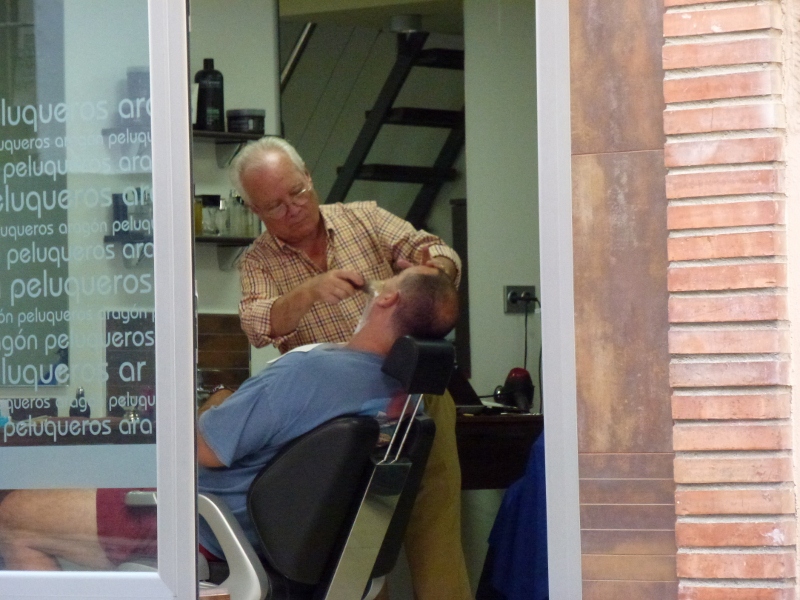 So as all, or most, of you know, I keep my hair (what’s left of it) very short.  It’s easy to take care of, and I’m not wasting time trying to do the comb-over thing.  In the U.S., I would either cut it myself using some clippers, or I would go to the local Supercuts, We Be Cuts, or Rat-Tails, Mullets & More.

If I didn’t do it myself, and went to one of the establishments listed above, it was usually a quick in and quick out affair.  I like that.  5-10 minutes tops!  So having been in Spain for a couple of months, my hair was looking pretty bad.  I decided to hit the local barber, and after determining that it wasn’t grossly expensive (10 Euros), I also decided to go for a shave for 5 Euros more.

In all my years, I’ve never, ever had someone else shave me.  I’ve seen enough Westerns and Mob movies that it looked like a cool thing to do.  (Minus the hidden Colt-45 or Tommy Gun…)

I haven’t been to a barbershop in years.  Probably decades.  Plus, not having been in any type of Spanish haircutting establishment, I wasn’t sure exactly what to expect.  I went in, took a seat, and waited, watched, and listened.  Other than the patrons speaking Spanish, I would bet you could have transported this barbershop to any place in the U.S., and it would fit in nicely.

The main topic of the day was sports (go figure).  The big sporting news here is how the local professional soccer club is doing well, not only in La Liga (the top soccer league in Spain), but also on the European front in the EUFA Champions League.  Of course, the other topic that came up was the economy.  I daresay that it’s a bigger mental burden here than in the U.S.  General unemployment has risen above 25% for the first time.  Ever.  It’s above 50% for those under 30, so it weighs heavily on peoples’ minds.  Picking out sentences here and there, the general consensus appears to be that the Prime Minister (rough equivalent of our U.S. President) is in charge, but “no one is at the wheel”.

Shave and a Haircut – Haircutting As An Art

As I was listening to the discussion, I was intently watching the barber in action.  He was working on a guy in his late-thirties.  He went from clippers, to scissors, to a straight-razor in a very deliberate manner.  He could have easily done the guy’s hair in a quarter of the time, but the barber was meticulous.  Time was not a factor.  Unconcerned with “turning over” the chair as quickly as possible, his hands coaxed, cut, and groomed every last hair into submission.  All while discussing the topic of the moment.

I will admit, at first, I was thinking, “What is taking so long?!”

But this is a barbershop, and a Spanish one at that, so the hands on the clock had no say in deciding when the barber was finished with his latest creation.

After a few more patrons were done, it was my turn.  By this time, another barber started, and I was his first patron of the day.  As he got me ready with the cape, and that paper-thingy, he asked me how I wanted my haircut.  Actually, I’m guessing that that’s what he asked.  He put the cape and paper-thingy on me, so I connected the dots and assumed that’s what he was asking.

“Corte de pelo y afeitado, por favor.”  I sure hoped I said that right.  I hope I wasn’t asking for a bikini wax, or something like that.  He nodded and asked me how long I wanted the haircut.  That was easy, “Tres o cuatro milímetros.”  I was giving the artist some flexibility in how he would approach his latest masterpiece.  When your hair is as short as mine, what do I care about a millimeter or two?

So he went to work.  He grabbed his clippers, snapped on an attachment, and made his first artistic stroke.  Turning my head, he showed me his work, and asked, “Cuatro milímetros.  ¿ Bien?”  He put my wishes above his creativity, and I appreciated that, so I requested three millimeters.

The haircut was slower than normal, and he was very precise.  He used a straight-razor for the neckline.  “They don’t do that in the U.S.!” I was thinking.  Hey, if it gives me a few more days of smooth skin, it’s fine with me.

Side note:  Now some of you guys out there may be wondering about the straight-razor.  I was wondering if the establishment was going to use a straight-razor, and envisioned the barber stropping the razor (sharpening it on the obligatory leather strap).  What I found interesting was that the razors are actually disposable (makes sense in this day and age), but they fit into the holder, so that from 3 feet (sorry, 1 meter) away, it looks like an old-timey straight-razor.

The haircut was finished, and I looked like a human being again.  It was onto the shave.  Now when I think of a shave (again, going back to the movies I’ve seen), how does a shave always begin?  It starts with the hot towel.  Maybe it has eucalyptus, citrus, or some other fragrance, but there’s always a hot towel.  In this case, however, there was no hot towel, no fragrance, nothing.

At first, I was worried, because the water/foam he was using was cold.  I’ve had to use cold water to shave, and it can hurt, cause nicks, and generally lead to a poor shave.  As he brushed my face though, the water/foam mix thickened, and warmed slightly.  I looked up, and saw that I had some serious shaving cream on my face.  Cool.

He got the razor prepared, and went to work.  It was very strange having someone else handle my face.  His hands and fingers were all over my face, stretching the skin, pulling my nose this way and that, and using short strokes with the razor.  Now since no towel was used, you may be wondering what he did with the shaved whiskers.  He wiped them on his wrist!  Yeah.  I don’t know how he didn’t manage to slit his wrist because he would shave and wipe in a quick motion.

When he was done shaving me, he scooped up all of the shavings (with the razor), and put them on an old piece of cut-up newspaper.  He must have the smoothest wrist in all of Spain.  Once he was done, he wiped my face and neck, sprayed some powder all over, and that was it.  My first shave was a success!  I did have a couple of nicks, but they didn’t hurt or bleed much.  I would definitely do that again.

I still have Hot Towel Shave on my bucket list, but I can now cross off Somebody Other Than Alan Shaves Me.

5 thoughts on “Shave and a Haircut, Two Pence”