This is another one of my “off-the-wall” kind of posts with random thoughts.  I will cover three seemingly non-related things, but if you trust me (you trust me right?), they should converge nicely.

You either have it, or you don’t.  I’ll admit that there were times when I could be very intelligent growing up, I could be completely lacking in common sense.  My dad would often say, “Alan, sometimes you do stupid shit!”.  This was normally said after I’d done something pretty dumb (that’s a really long list).  Luckily, I grew out of it (for the most part!), and now I consider myself belonging to the group that has common sense.

Unfortunately, a lot of people never grow out of the Lacking Common Sense Phase, and either do harm to themselves or others.  For those of us that possess common sense, we can only watch in amazement, or capture video if we’re lucky, and keep our distance somewhat.

The concept of taste, i.e. a high aesthetic standard, is a bit more nebulous, and hard to define.  My taste in picking a woman to marry was exemplary.  My taste in clothing that I wear, not so much.  I may not be able to tell a Paginini from a Polonaise, but I can generally pick out good music.  I’m further out of my depth at criticizing art, but in the end, I know what I like.

Other people’s sense of taste can often be readily discerned.  The guy with the mullet wearing the 70s jeans and t-shirt that you see at the local store, proves that there some strange genetic aberrations that the human race just cannot eradicate.  Everyone stay out of that gene pool!

I told you this was a random post!  In general I detest Homeowner Associations, or like-minded organizations that require slavish obedience to conformity.  The planning and approval processes can be so frustrating, and over the top, that one wonders what sort of person desires to be in charge of such an organization.

That said, I have heard horror stories of people painting their houses bright purple, abandoning cars on their lawn, and other awful situations.  So I would have to admit that there are valid reasons to belong to a Homeowner Association.

So how do these three things converge?

An excellent question.  Heidi and I had been talking about doing a post about this when we first moved to Almuñécar, but it fell off our radar.  I was driving Lars to an appointment, and I “saw” this again.  I say I saw it because, we practically see it on a daily basis, but on that day, at that time, it came back onto my radar again.  What am I talking about?

This… That Thing That Makes You Go “Huh?” 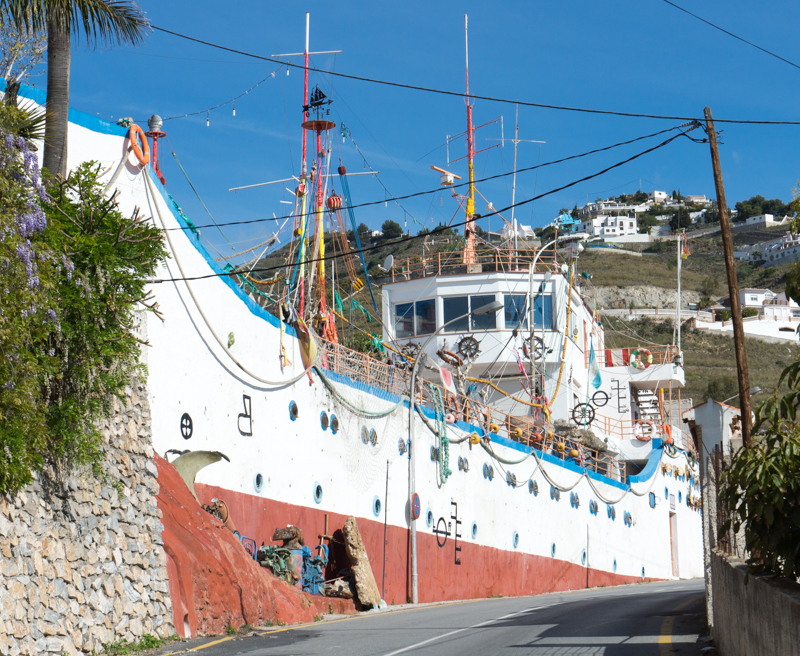 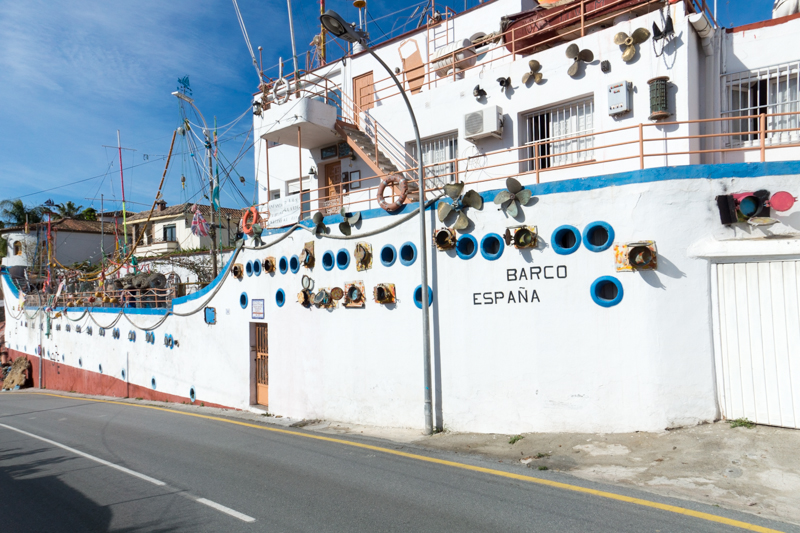 This monstrosity is on a major road that goes into our town.  It’s not hidden in the hills somewhere, it’s out there for everyone to admire (not really the right term).  So here we have a person who is seriously lacking on the common sense front.  This house (?!) is the equivalent of that dude with the mullet.  A flowing, six-inch, permed-in-the-front, Joe Dirt mullet.

While we’ve been here, we’ve experienced many different aspects of Spain.  Food, music, art, dance, etc.  But luckily, this place is an outlier.  An anomaly.  I’ve got to wonder whether this guy’s neighbors are wishing they’d gone the Homeowner Association route.  When someone is building a home, you think, “How bad could it be?”.  In what universe is it OK to build a 210 foot boat on a street?  I don’t know, perhaps his boat ran aground.  Well don’t just leave it there!  You tow that sucker back into the sea!  You don’t drop anchor.  (There’s an actual anchor on the street.  Apparently the “older man” that owns the place was a former Captain.  He also owns a boutique hotel in town.)

This is a case where I just don’t get it, and I don’t want to.  Wrong is wrong!  After writing about this, I’m interested in hearing about your neighbor horror stories.  Heck, you can even share some of your random thoughts.