Tibet, the land of wonderful monasteries and breathtaking views of the majestic mountains, is home to the Mount Everest. Travelers wanting to join in the Tibet tour have to start their trek from Lhasa, the capital city of the Tibet Autonomous Region. 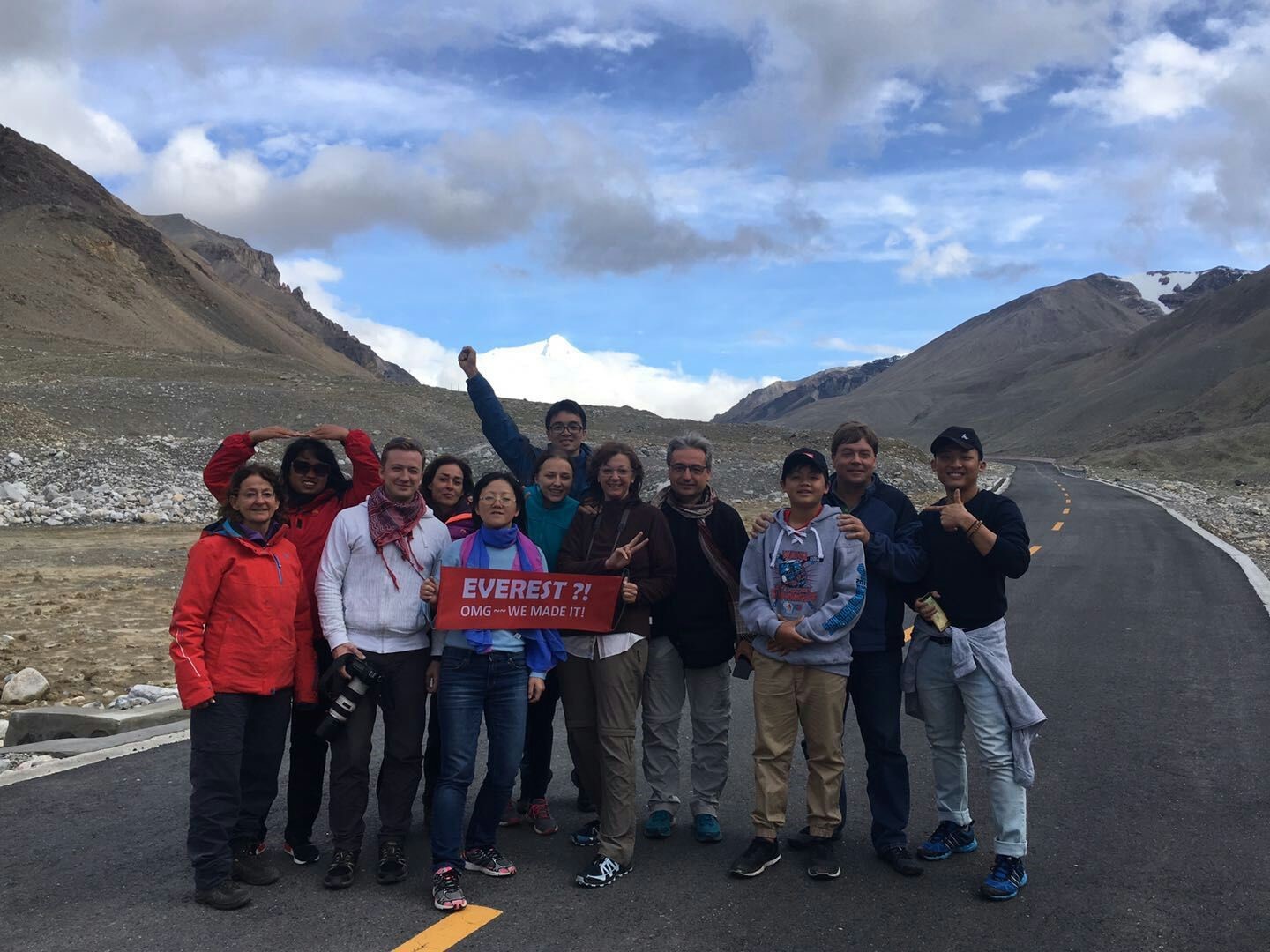 Lhasa to EBC is an 8-day journey that begins and ends in Lhasa. The journey covers the beautiful Tibetan cities of Lhasa, Shigatse, Gyantse, and Rongbuk passing through some of the most beautiful monasteries, serene lakes and rivers, glaciers, farming valleys and exotic views of the mountains to ultimately step foot at the Everest Base Camp – the destination. Standing at the EBC and looking high at the mind-blowing Mt. Everest gives the travelers a feeling of achievement.

The tour from Lhasa to EBC covers the most famous sights of Tibet. Starting with Lhasa, the Potala Palace is a must see. Once the winter home of the Dalai Lamas, Potala Palace is an architectural wonder and has more than 1000 rooms. The tour guide needs to book the time slot to visit the palace several days in advance as the tickets are limited. There are magnificent chapels and golden stupas which leave the tourists awestruck. Photography is prohibited inside the palace. However, some brilliant pictures can be taken from different spots and angles.

The best point to capture the sunrise and sunset of Potala Palace is Chakpori Hill. The entrance gate leads to the sightseeing spot and the best time to take photographs is early morning when the first rays of the sun hits the palace.

To the southwest of the palace is located the Palubuk Monastery where the photos can be captured under the sunset glow with the white tower playing as the foreground. For those wanting to shoot the front of the Potala Palace, the Potala Palace Square is the ideal spot especially when during the music fountain at night.

Next landmark is the 1300-year-old Jokhang Temple – the spiritual heart of Tibet. Thousands of pilgrims from around the world visit this temple to worship the central golden image of Buddha. Also known as the ‘House of Buddha’, the temple is best visited in the morning. Standing atop the roof of the temple, tourists should keep the golden prayer wheel and the dharma wheel in the frame while taking photos of the Potala Palace.

Encircling the Jokhang Temple is the famous Barkhor Street. As a tradition of pilgrimage, the locals and the pilgrims walk around the street in a clockwise direction which is the most captivating scene to capture on a camera. Shops selling varieties of Tibetan goods are lined on this street.

To continue with the exploration are the attractions like Norbulingka and the Great Three Gelugpa Monasteries – Drepung Monastery, Sera Monastery, and Ganden Monastery.

Norbulingka used to be the summer palace of the Dalai Lamas and is now a public park. It houses the largest man-made garden in Tibet and is famous for its Potrang which were the private palaces of the Dalai Lamas. Towards the western outskirts of Lhasa will be the stop at the Drepung Monastery which is considered to be one of the most important monasteries in Tibet.  Built in the 14th century, it was home to more than 10,000 monks in the past which has now dropped to a few hundred. It is also known as the ‘Mother School of Dalai Lamas’ as the Dalai Lamas used to study there. 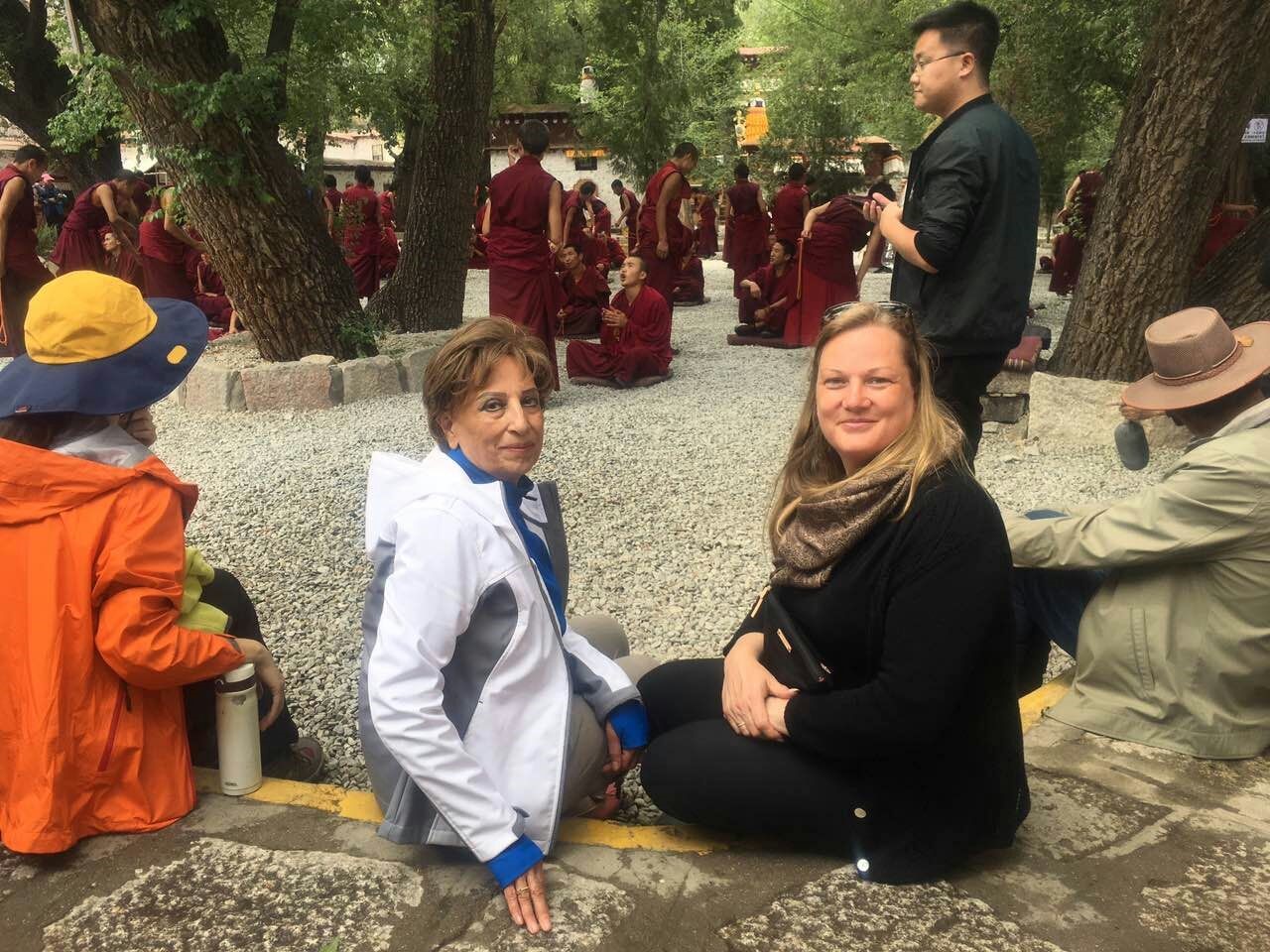 Another famous monastery which will be a part of the tour is the Sera Monastery which is famous for the monk debates from 3 p.m to 5 p.m. every day except on Sundays. It is a preserved monastery with eye-catching chapels whereas the Ganden Monastery provides a splendid view of the Lhasa Valley.

After exploring Lhasa, the guide will further take the tourists to the wonderful city of Shigatse which is an eight-hour drive from Lhasa. Shigatse city is the 2nd largest city of Tibet and is home to the Tashilhunpo Monastery. While photography is strictly prohibited inside the monastery, pictures can be taken from the interior courtyard. The entire journey from Lhasa to Shigatse offers picturesque views ideal for photography.

Along the road comes the pristine Yamdrok Lake which is the largest fresh lake in the northern Himalayas.  The turquoise lake is a treat for photographers against the mountains as a backdrop. The prime time for photography is before and after sunrise or sunset.  Along the lakeshore one can spot small villages as well as beautiful pastures of yak allowing for stunning photographs. The Khamba La pass observatory is known to be the best place to shoot the lake. Pictures of the lake and the winding road can be taken in hierarchical transform by keeping the white Noijin Kangsang in the foreground.

Moving ahead of the lake, tourists will get a view of the Karola Glacier inviting you for a series of pictures of the white beauty.

The Tourists visiting the Shigatse area get to experience good weather as there is sufficient sunlight to arrest the beautiful scenery around. But for Mount Everest expeditions it is advisable to avoid the months from October to April and the rainy months of July and August. Read more on the Himalayas.

As the travel advances from Shigatse towards EBC, tourists get the chance to shoot Mt. Everest from the 3 best locations presenting an extraordinary view of the highest mountain peak. 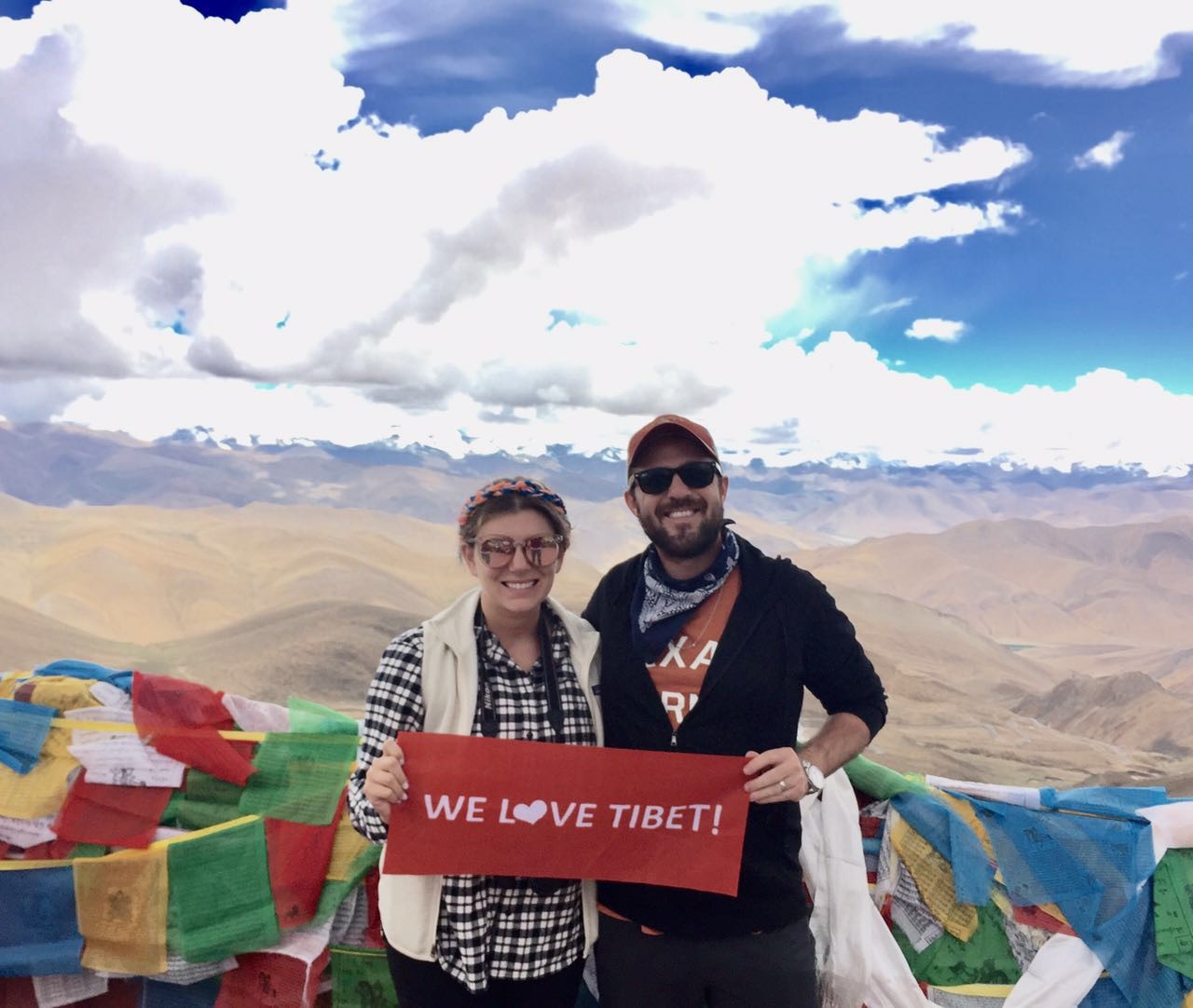 The scene from Gawu La is grand, giving travelers an enigmatic view of the highest peak in the world and is the best place to shoot all the five mountains. As one advances towards the summit, the view of the river plain and the green village is something to be snapped immediately. At dusk, the main body of the Everest attains the most light giving photographers a better effect to shoot the mountain.

Advancing towards EBC comes another ideal point for photographers – The Rongbuk Monastery. It is the highest temple in the world giving a perfect view of Mt. Everest. Photographers get to document amazing views of the Everest in their cameras by keeping the white stupa in the monastery as the foreground to add serenity in the picture. The sand dune beside the monastery adds a different element to the pictures.

The best moment to shoot is an hour before and after sunrise/sunset to experience the casting glow of the sun on the snow-capped Everest to create the magical experience. Since the saturation of the light is high during that time, there is perfect ambient light to create that perfect shot of the Everest. 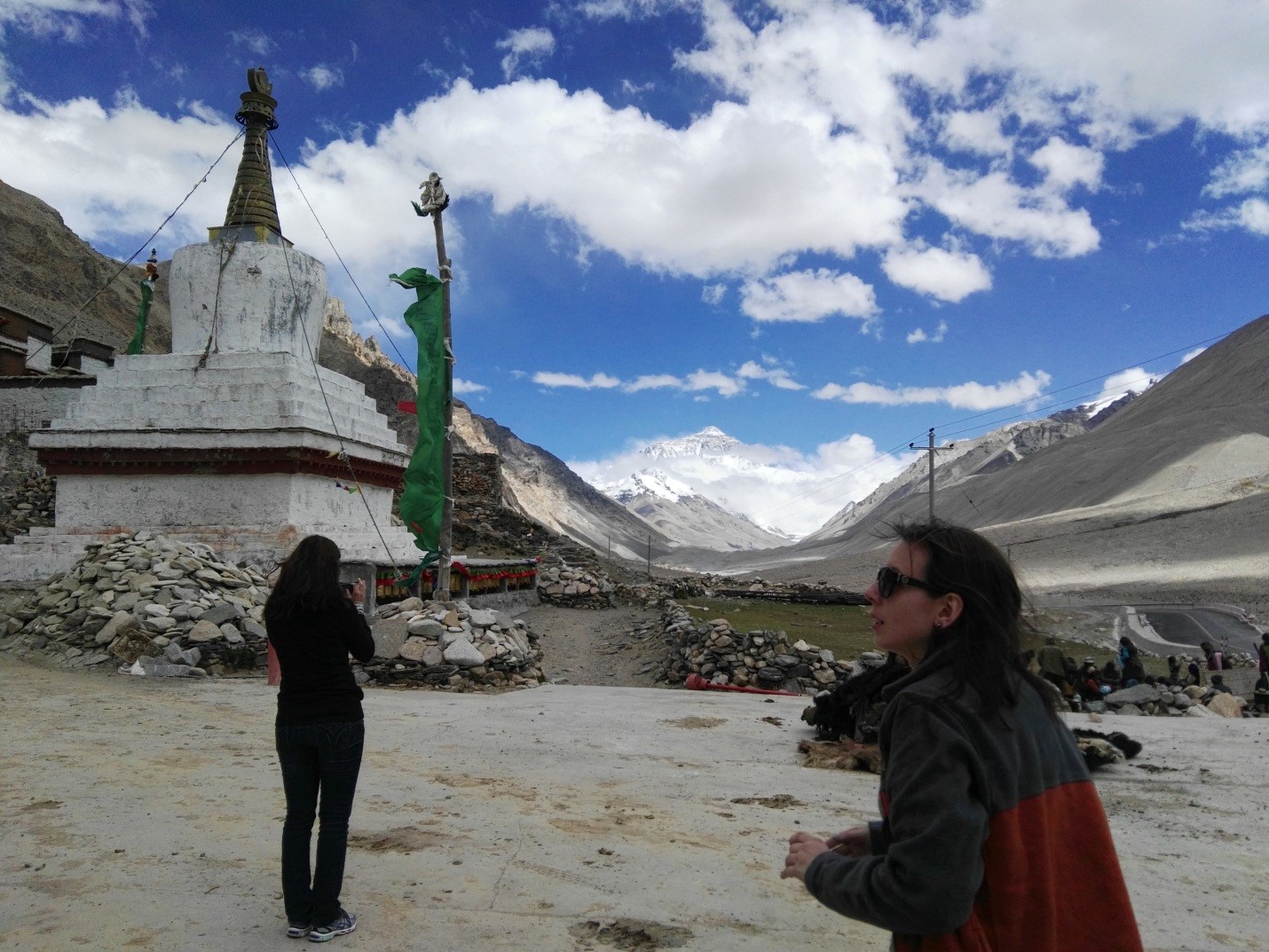 Travelers are required to spend the night at Rongbuk before reaching their final destination – The Everest Base Camp. It is situated at an altitude of 5200m and is the closest place to view and enjoy Mount Everest. Tibet tourists can reach the camp either via trek or by bus.

Standing at the EBC and looking towards Mount Everest will give the magnificent feeling of viewing the world’s highest peak in such close proximity. The experience is surely intimate, giving a sense of achievement to those who visit the camp, and the ambition to climb the giant mountain one day. 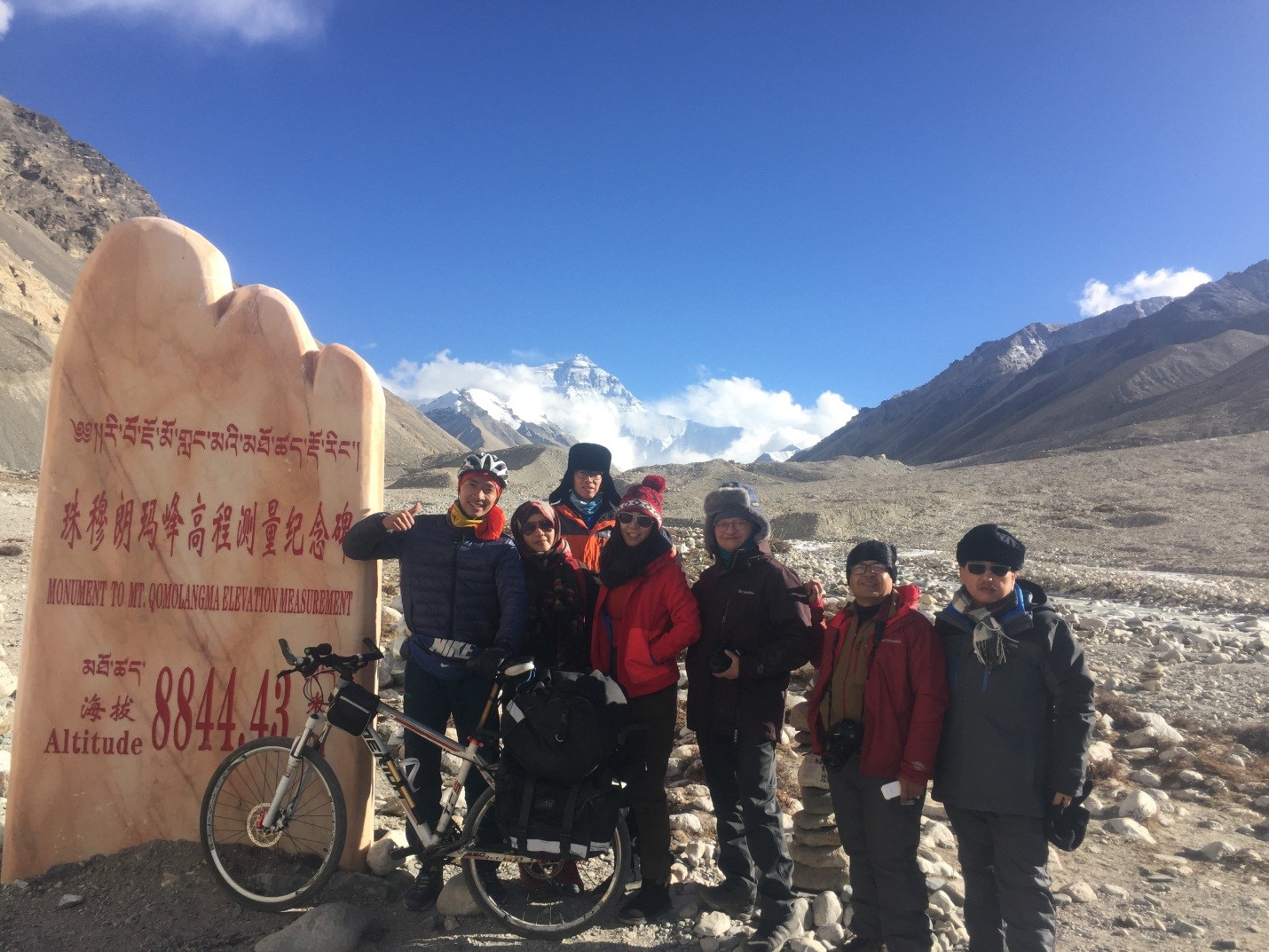 Tibet is a photographer’s paradise in itself and if one plans to go on a tour to the EBC, it’s better to carry a high-quality camera as the cameras will come alive amidst the grand locales of Tibet especially while nearing the Everest. Shooting Mount Everest is an experience of a lifetime and a journey which can be told merely through photographs, so it is imperative to time each and every picture as perfectly as possible keeping the weather conditions in mind.

You can purchase and claim travel insurance online, even after you’ve left home. Travel insurance from WorldNomads.com is available to people from 140 countries. It’s designed for adventurous travelers with cover for overseas medical, evacuation, baggage and a range of adventure sports and activities.

Looking for more of our tips on Travel within Asia?