There are great benefits to doing a housesit.  The biggest one is being able to visit a place that one might not visit and not having to pay for a hotel/apartment.  The other big benefit as far as the Wagoners are concerned is that we get Pet Time! 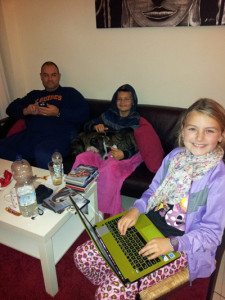 We miss having a pet.  We had Baker for a number of years, and he was a fantastic dog, and when Heidi and I were first married, we had two cats (Casey and Blanche).  So when we heard that our housesit host had a cat and a dog, we were very excited.

When we arrived at the apartment in Estepona, we met our two newest friends:  Bessie and Roxy.  Bessie is the cat, and Roxy is the dog.  I could tell right away that Roxy and I were going to be good buds because she was giving me “love bites”.  If you’re not a pet owner, you may not understand, so I’ll explain.  A love bite is where the pet grabs your hand/arm in their mouth, and let’s you know, “I like you!”.  If you’re not familiar with pets, it can seem a bit scary.  The animals don’t break the skin, but they’re letting you know that they like you.  At least at that moment.  🙂

So let me give you the rundown…

She is probably the most laid-back cat that I’ve ever met.  At least until she’s hungry in the morning.  Then she lets you know that when it comes to food, she is definitely not the easy going sort.  She was our alarm clock while we stayed in Estepona.  Unfortunately, she did not have a snooze button.  Her snooze button is to get up and feed her. 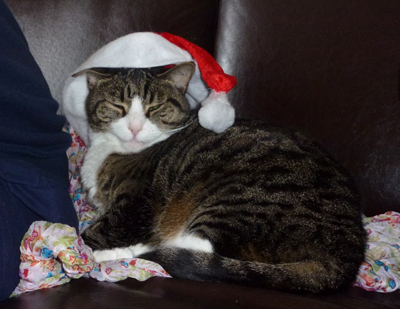 While we were at the apartment, she would come over to us, lay on us, and even give us kitty massages.  If you’re a cat owner, you know what I mean.  If not, Google it.  As long as you were scratching her, she was perfectly content to let you roll her over on her back and rub her belly.  That’s when she would get her purr motor going. 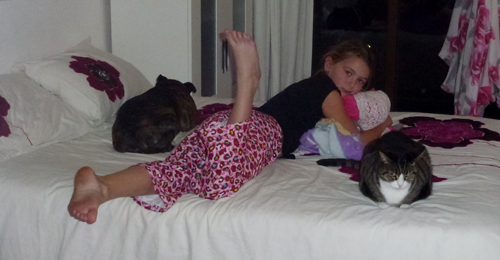 The one thing that I forgot about cats, is that they have no problem invading personal space.  I woke up a couple of times with her sleeping on my chest.  That’s high praise coming from a cat.

Roxy is a Staffordshire Terrier…commonly known as a Pit Bull.  Unfortunately, the breed has a bit of a bad rap, and I’d never spent much time around one, so I was a little bit worried.  My first impression of her was that she was smaller than I expected, but she was solid muscle.  I knew she liked me, what with the aforementioned love bites. 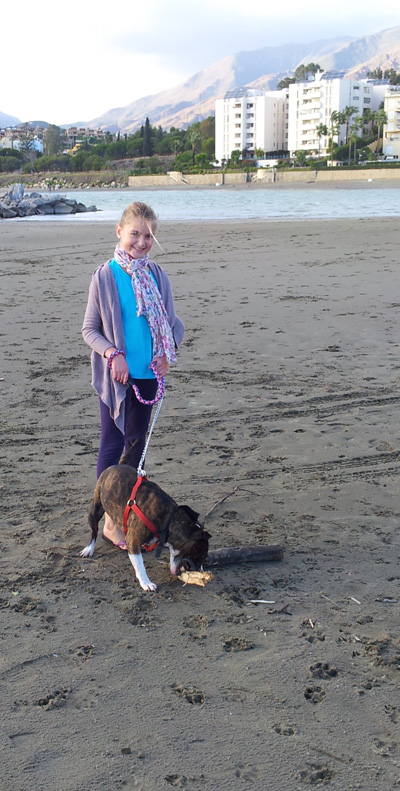 She is the classic case of a dog not knowing she’s a dog.  She would hang out with us, get on our laps, and play with us on the floor.  I did some tug-of-war games with her, and holy cow did she have some grip with those teeth.  If she didn’t want to let go of the toy, it was staying in her mouth.  Period.

She was a big softy though.  She didn’t like loud noises, and the first night we were in Estepona, there was a serious wind storm.  She climbed on the bed with me and snuggled real close as she was scared.  I usually sleep with my face on one of my hands, and during the middle of the night, she had moved, and was sleeping on my upper arm.  Awww…

She was another one who didn’t understand about personal space either.  One time, I woke up with Bessie on top of the covers to one side of my body, with Roxy sleeping between my legs.  I was pinned!  I couldn’t roll over, I couldn’t do anything until I moved some pet bottoms around. 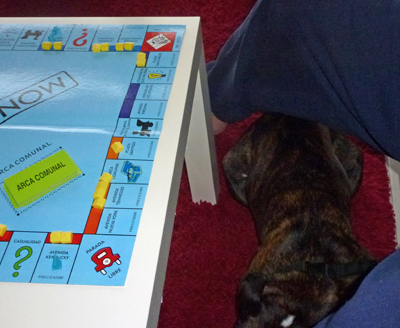 Roxy liked to be either right by me, or on top of me.  We were playing Monopoly, and Roxy decided she wanted to play financial advisor, and decided to camp out on my feet.  I had to move my feet around her, but she was content to just lay there.  She didn’t provide much in the way of advisement, but she kept my feet warm.

It was sad to say goodbye to our “step pets”, but we got a good dose of dog and cat time!

2 thoughts on “Getting some good Pet Time”