With all of the hard work and practice that Anya has been doing, her chance to flamenco dance in public finally came to fruition.  Short version:  She did a fantastic!  Long version:  Well, you’ll just have to continue reading. 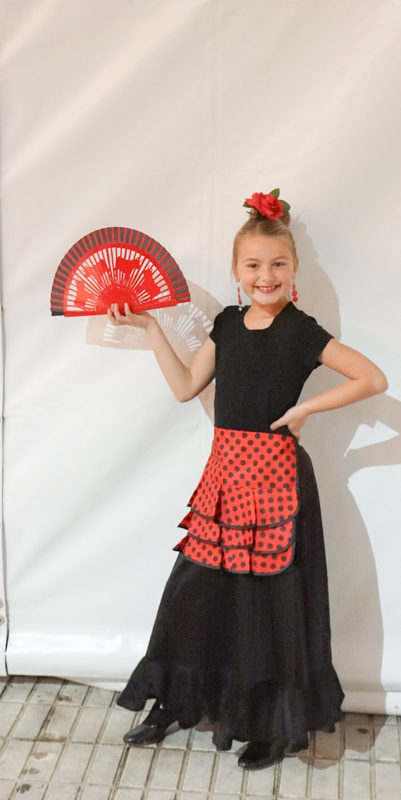 Anya has been going to Flamenco class only a short while, so when the instructor (Olga) asked Anya to participate in the La Herradura fair (Fiestas Patronales de San Jose), I was a bit nervous for her.  After all, speaking in public, singing in church, or flamenco dancing in front of hundreds of people for the first time can be nerve-wracking for anyone.  Not to mention this was all scheduled to commence at 9:30PM on a school night!

Time to Flamenco Dance:  Minus 90 Minutes

With about an hour and a half before the dance, I can tell Anya is getting antsy.  She’s very excited, and over the course of the next hour, Heidi gets her ready.  There’s the hair, dress, and makeup (Dadism: Ugh–not ready for the makeup quite yet).  Anya is all ready, and she looks awesome!  We pick up Bev, and make our way to La Herradura.

Once we park the car, we’re not exactly sure where to go, but we see another girl in Anya’s dance class, and follow her to the town square which has been covered in a big tent.  Now we’re on the lookout for Olga.  While we wait, we watch various exhibitions/acts perform.  There’s some karate demonstrations, jazzercise routines, etc.

It’s the scheduled time for Anya & Crew to dance, but apparently the organizers are a bit behind schedule.  We don’t know how behind they are, but we were advised to walk around a bit and come back in 30 minutes or so.  I buy a Tinto (cheap red wine), that tastes really bad, and we soak in the atmosphere and people.  I see a gentleman standing around with about a 15° lean.  I’m thinking that:

Once he starts walking, it’s conclusive that it’s number 3.  Heading back to the tent, I’m anxious to know when my little girl will be dancing.

Old Man Rant #1:  Normally I try to take things in stride.  Especially if I think there’s a cultural nuance that I’m missing.  But I think this is one of those times where it’s not a cultural thing, but just someone being stupid.  The music was loud.  Way too loud!  I thought about talking to the guy manning the sound board but didn’t.  Anyway, I won’t be hiring that guy to be a DJ, that’s for sure.

Time to Flamenco Dance:  Plus 2 Hours

Read the line above again.  Yes.  They are behind 2 hours.  Crazy.  I haven’t really spoken to any of the other parents due to (1) the language barrier, and (2) Old Man Rant #1, but it’s my perception that this degree of lateness is bad, even for Spain.

It’s finally time (11:30PM !!!) for the young girls/boy to  get up on stage and flamenco dance, and they all do a great job.  Of course Anya did the best, but that’s just my (proud Dad) opinion.  Nobody tripped, fell down, or caught on fire, and everyone did great.

Enjoy the video (you may want to turn down the volume first)!


Old Man Rant #2:  Having things get so far behind schedule seems really bad to me.  It does a disservice to the attendees, but more importantly to those performing.

We wound up getting home around 12:45 in the morning on Monday, and it was a school day.  Needless to say, everyone was a bit tired and grumpy.  Luckily there was no performance on Monday, so Boo got to catch up on some sleep, and get prepared for the Tuesday’s performance.

Since it was a local holiday, the kids did not have school, and Anya’s performance was at 1PM.  It’s funny how fast 1PM came that day after waking up late, and lazing around, but once again, Heidi got Anya all dressed up, looking dy-no-mite!  Once we got to La Herradura, we made our way to the main tent again, but guess what?  There was nothing set up.  No vendors, dancers, and no Loud Sound Guy (that’s his new name).  Strange.

This isn’t starting well (again).  So we walked around, and found a stage.  This must be it!  Slowly but surely, we saw other dancer’s in Anya’s troupe arrive.  And again, things were behind schedule, and we weren’t sure when things were going to start <big American sigh>.

The other big variable was the weather.  It was scheduled to rain that day.  And while the area was covered with a multitude of tarps, the stage was not covered with a tarp.  Hello?  It’s going to rain, and you don’t cover the one place where the dancers will be performing?  That’s not very smart.  But I’m getting off topic.  There were sprinkles here and there, but nothing major.

About 45 minutes later, the dancers finally started.  And about that time, it really started dumping, so the stage was off limits.  That forced all of the attendees to move back so that the dancers would be covered.  This made for very cramped conditions, but at least the kids were able to dance.  And it continues to rain, and the tarps are starting to sag.  And that sagging means that the water is collecting, and not draining.  This is called foreshadowing…

Old Man Rant #3:  Unfortunately, there are some really idiotic people out there.  And Spain is no exception.  Everyone saw the rain was collecting, and not doing much about it.  But Señor Numbskull with a brand new Swiss Army knife decided he was going to take action.  So what does he do?  He slashes a whole in the tarp!  And he does that a few more times, so now there’s water leaking all over the place, and there’s no fixing it.

The worst part is the look on his face when he did this.  Instead of the “I did something STUPID” look (I’m pretty good at it), he has the “I just solved the problem” look.  He’s not even smart enough to realize he’s did a seriously dumb thing.  He had a beer in his hand, so I’ll chalk it up to the drinking.

The video below is a bit jumpy, so I apologize.  In my defense, there were a number of things going on.  People were jostling for a good viewing position and dodging the dumping rain.  Look for the rain on the left side of the video that drains occasionally. The show must go on, and it did.