One of the great things about Almuñécar, is that it seems there’s always some sort of fair or celebration going on.  This last weekend was no exception.  This time, it’s a celebration of food, and it’s called Feria Gastronómica de Almuñécar, or the Gastronomic Fair of Almuñécar. 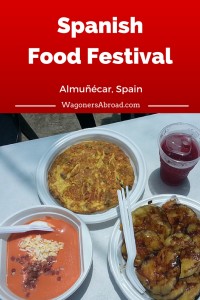 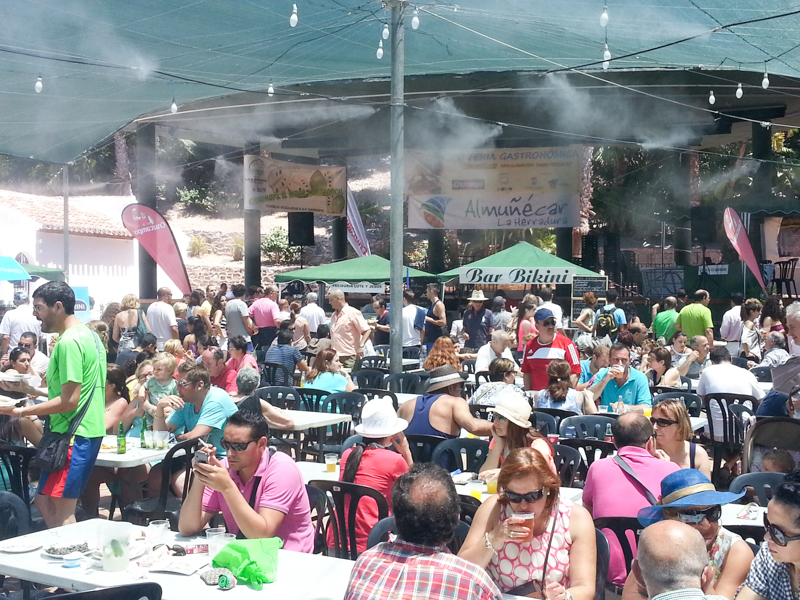 My new favorite bar in the background

This is the first time we’ve been to this particular fair, and I was impressed.  Held at Parque de El Majuelo, approximately 30-40 vendors have booths where they bring out their best menu items.  The fair is a big draw for not only the locals, but for tourists alike, marking a growing trend in “Culinary Tourism”.  The park was covered with netting to block the sun, and there were even misters which helped keep us cool.

We met our friends Maria and Bruce there, and got started eating right away.  There was plenty of wine, beer, and other local liquid treats available, like Chirimoya Slushies!  The smells were fantastic, as there was an entire area dedicated to grilled meats. 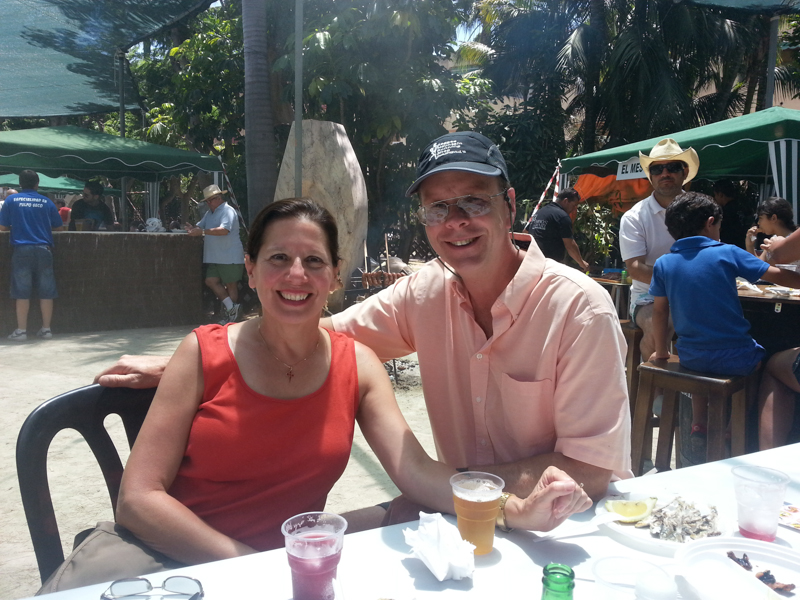 Maria and Anya came back with a couple of plates with various items.  What Spanish fair would be complete without Paella.  There are many different types of paella, and it’s actually something I like.  There was also a plate with some vegetables (I know…eeeww!), and I actually ate some of them.  Ask Bruce and Maria.  They are my witnesses. 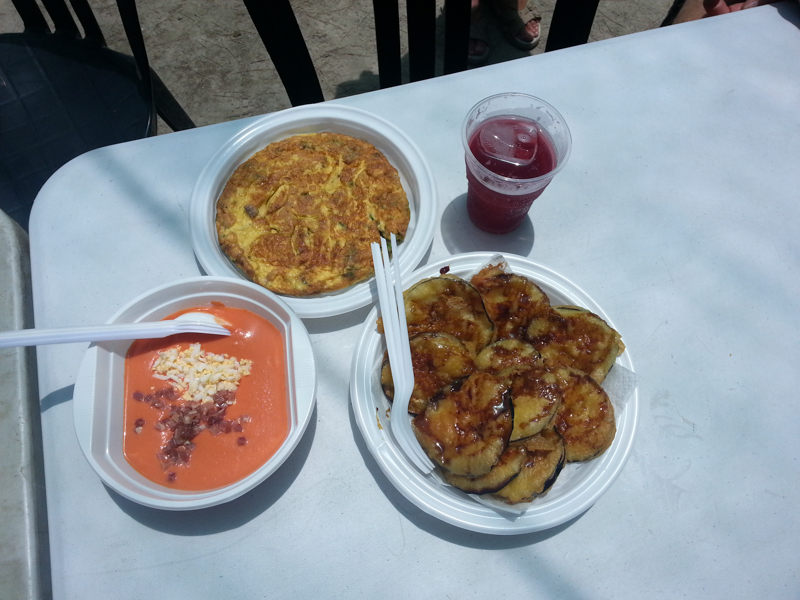 The paella had a number of different meats in it.  There was your standard chicken, mussels, and pork.  It even included some langastino and rabbit.  No, that was not a typo…rabbit.  There was also a ball of something that we think was rabbit, but I’m not so sure.  A nice lady with a trolley full of cold (semi-cold) drinks came by, and we had some bottled water, iced-tea, and coke to wash the food down. 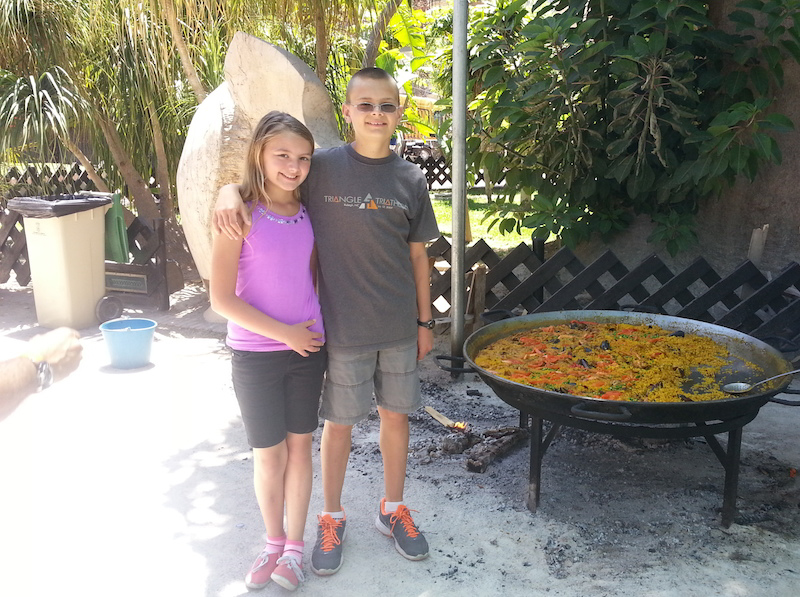 Of course, no meal would be complete without a sampling of the local Spanish desserts, and they did not disappoint.  The bakeries really pulled out all of the stops and had some visually stunning confections.  With such a large collection of cookies, tarts, fruit pastries, and puddings available, it was hard to know what to buy.  It all looked so tasty!

Leave it to Anya to sniff out what some would call the pinnacle of culinary sweetness…ice cream!  She made a beeline to the ice cream vendor, and asked for two scoops of Chocolate Mint!  Bruce ordered a small cup of Mascarpone which looked tasty.  That left me to order a cone with Frutos del Bosques.  The literal translation means fruit of the forest, and it’s a mix of strawberry, blueberry, blackberry, and raspberry.  I ordered it in my normal fashion.  That is to say, I ordered a normal cone with ice cream, with an additional cone.  And I do this to them: 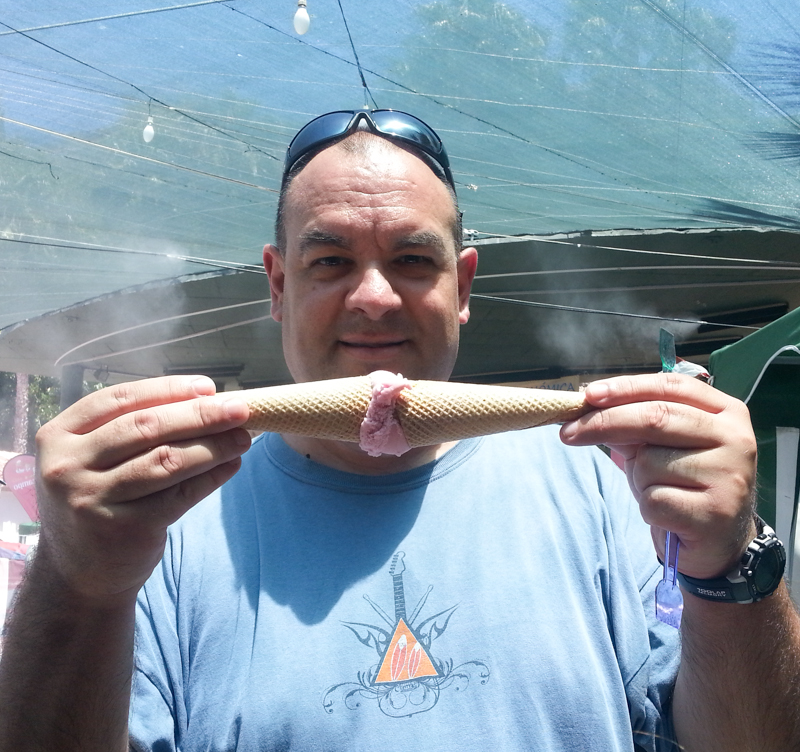 I received so many looks from people, and not due to my dashing good looks this time.  I think it embarrasses the kids when I do this, but that’s a big reason why I became a parent!  As expected the ice cream was delicious.

As we’ve mentioned before, living in a small town has been such a rewarding experience.  We saw a number of friends and acquaintances, and everyone was in a festive mood.  Excellent food, good music, and great company made for an extraordinary time.  It was so much fun, that we met up with Bruce and Maria on Sunday was well.

2 thoughts on “A Taste of Spain – Feria Gastronómica de Almuñécar”