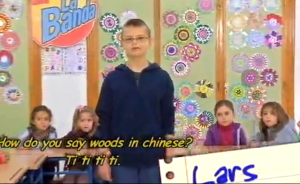 A few weeks ago, the kids came home with a permission slip that needed to be signed by a parent and returned.  This wasn’t for a field trip, this time it was approval for them to appear on TV.   Of course we signed away, as the kids were just tickled.  About a week later the TV Show Crew arrived at the school and filmed all day with the kids.  The 2 part show, “La Banda” aired this weekend Saturday and Sunday morning (March 9 and March 10).

We don’t get Spanish TV (only British), so were scrambling to figure out where we could watch it at 7:30am.  It occurred to us that my Mom, visiting us in Spain, has Spanish TV at her place. The plan was to go over there bright and early.   Later that evening, we realized we could just watch it on-line.  They seem to post the shows a few hours after they air.   So we ended up doing just that.  Of course we neglected to inform Mom, so she was up waiting for us (while we were sleeping).  She even called us a few times, but our phones were upstairs out of ear shot.  Sorry Mom! 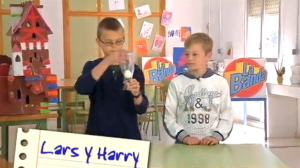 The kids were very excited to see themselves on National TV.  We went for a walk around town yesterday and stopped at a local park.  Some kids recognized Lars from the TV show that aired that morning.  Small towns are cool sometimes.  Our little star just soaked it all up!

For those of you that watched our Wagoner TV Episode 04  and viewed the egg go into the carafe…..well in video #2 Lars and Harry will show you how to get the egg out. (Jan, this is for you!)

10 thoughts on “The Kids Were On National TV!”