It recently hit home for me that our kids have their own lives, which we parents don’t really know much about.  Yes, we are raising kids in Spain, but does that make a difference?  Would our teens and our choices have been similar if we weren’t in Spain?  We had a list of goals when moving to Spain and one of those was to ensure the kids were able to adapt to change.  Now I’m wondering if I need the lesson on adapting to change. 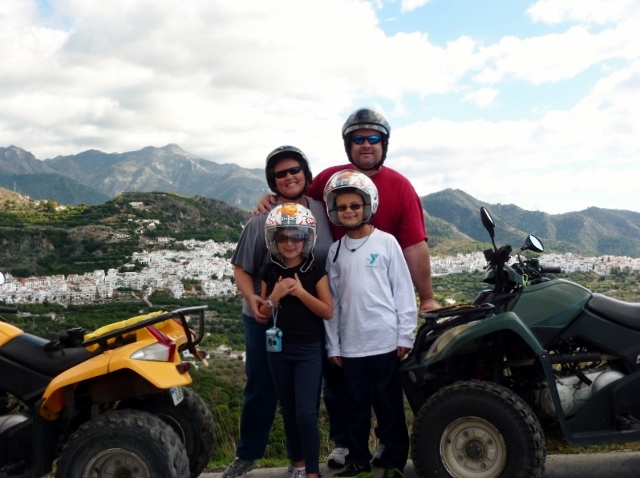 The kids were just 7 and 10 when we arrived and of course the plan was to just stay a year or two.  We did our best to travel as much as we could, to expose them to unfamiliar things and even some things out of our comfort zone.  During our first week in Spain, we kicked off our entire adventure by taking our little ones to La Tomatina.

I’m not sure that was the smartest parental decision we’ve made, but it all seemed to work out and we all did have fun.  It was the last year it was a free event and people were there in the thousands.

On that day, I remember thinking “Wow, in no time at all the kids will want to come to festivals like this on their own.”  It all seemed so far off in the distant future, I didn’t give it too much thought.

In some ways, this experience set the tone for us over the next 6 years.  We made sure to be right there with the kids, as we introduced them to new things.  We’ve done mud baths in Lo Pagan, bathed elephants in Thailand, zip lining in the French Alps, a water fight in Lanjarón, Lantern festival in Chiang Mai, Meditation with a Monk, Jet Skis in Langkawi and the list really goes on and on. 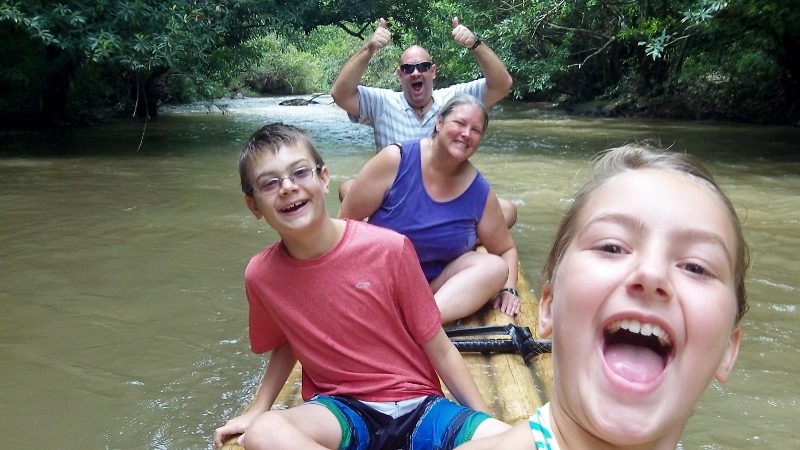 We also wanted the kids to have a small town life (well a town of 27K).  We wanted them to have independence and freedom to walk around the town and be out with friends.  They would play out front with the neighborhood kids and we would take family walks along the paseo.  It was a life with the kids outdoors exploring and not as much time inside online or watching TV.

At first it was a huge milestone for them to get to walk to the corner store together, then eventually on their own.  By about the age of 12, they were pretty much allowed to go anywhere they wanted in town, just be home before dark.

Living in Spain as expats

Obviously our short stay in Spain has now turned into, raising kids in Spain.  We’ve slowly increased their level of independence as they get older and love that we are here in Spain.  I am pretty sure we give them more freedom than we would have back in North Carolina and the best part is they can walk everywhere.  We don’t have to cart them around and be the taxi driver.  I’m not saying that doesn’t happen, it is just that we don’t have to.

Teens in Spain, the wee hours of the morning

There is one thing for certain that is different because we are raising our kids in Spain and that is how late they can stay out with friends.  My guess is that if we were in the US, they would likely need to be home by about 10:00 or 11:00 pm.  Well, here that is when people are just going out to dinner!  So Lars has to be home about 1:30 am and sometimes there is even more flexibility for special events.

I know that sounds insane, but I kid you not, entire families and toddlers are out at those hours.  We couldn’t feel more safe with the choice.  I am not sure if it would be the same in a bigger city in Spain or even another town, but it works where we live.  Nope, we aren’t the parents who have no rules either.  Crazy, I know!

We glided into a new phase last summer when we let Lars travel to Madrid on his own, for his volunteer work with Diverbo Teens.  Even though we knew someone was going to meet him at the train station, it was a big step for us.  He made great friends the two weeks he volunteered in 2017 and kept in touch with them all year.  Again this year, he volunteered for two weeks and he coordinated with the friends he made the previous year to all work at the same camp together. 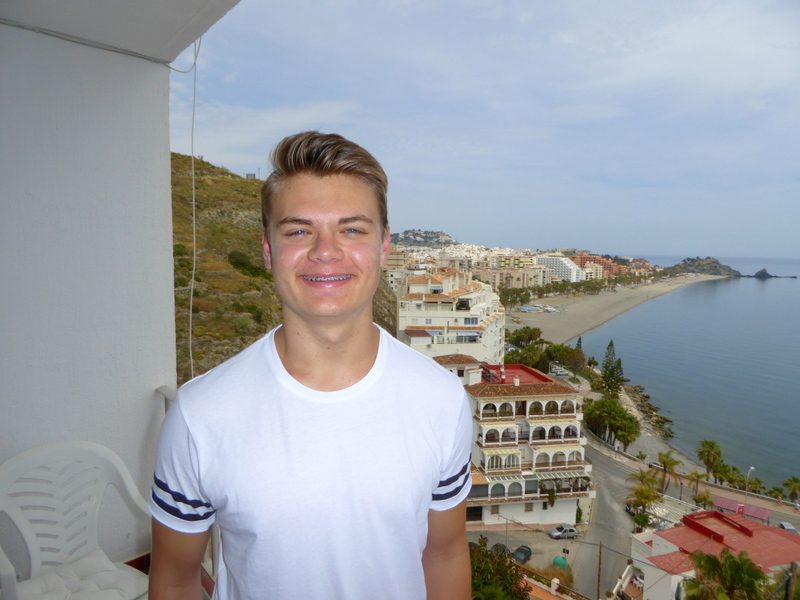 When he returned home from his volunteer session this year, things were different.  He not only made more new friends, but he reunited with those friends from the year prior.  It was as if no time passed and they were all certain these were lasting friendships.  Now Lars has friends from all over the world and is presenting new doors for us as parents to either allow him to pass through or keep them closed.

He returned home asking if he could meet up with some of his Diverbo friends in Malaga for an all day/night music festival, he asked if he can go visit friends in Ireland for 3 days and visit different friends in England for a few days.  Wait a minute!  We wanted you to adapt to change, to be independent, to love travel, but now you’ve gone and done it!  We’ve never met these friends!  When did you start having a life we know nothing about?

What in the world have we done?  We just figured he would go with the flow and explore our town with independence.  Now he is ready to travel the world on his own at a new 16 years of age!  How did we get here already?  What the heck did we do?  Ha, I guess be careful what you wish for.

Just so you know, we are still in limbo about any independent unsupervised international travel.  That said, we are taking the baby step today of allowing him to travel to Malaga (about an hour away) on his own and meet up with his friends at the music festival.  We’ve never been to this festival and according to past years, it has had about 60,000 people in attendance. YIKES!

This is his first solo trip, unsupervised and just out with friends.  Those thoughts I had 6 years ago at La Tomatina, happened far faster than I expected.  I dropped him off at the bus station today, and off he went to Malaga to meet up with 6 friends from various parts of Spain.  He was so excited and I’m going to guess a little anxious too.  As I was driving off he said, “You aren’t staying?  How do I know which bus to take?”

Shhhh, don’t tell Lars, but I was just around the corner in case I needed to be there.  I just wanted him to feel like he was doing it on his own.

What time does he come home?

Okay the music festival is from 11:00 – 24:00 with fireworks at the end.  There are more than 20 different bands playing and it is all at the beach in Malaga.  The last bus departing the city center back to Almuñécar departs at 8:30 pm, so he would need to leave the festival about an hour before that.  An alternate option is to catch the 11:00pm bus from Malaga to Nerja (about half way) and then we would pick him up there, but he would miss the fireworks.  He has requested that he just hang out with his friends all night on the beach and just not sleep, then make his way to the first bus to Almuñécar 7:00 am the next morning.

At the moment, we told him he can take the 11:00 pm bus home.  This is is first venture out and the thought of staying out all night just blows our minds.  Again, part of me wouldn’t even entertain any of these options in the US, but for some reason here in Spain things seem a little more civil and peaceful.  These big events with tens of thousands of people and they seem to remain in control with nothing hitting the headlines. 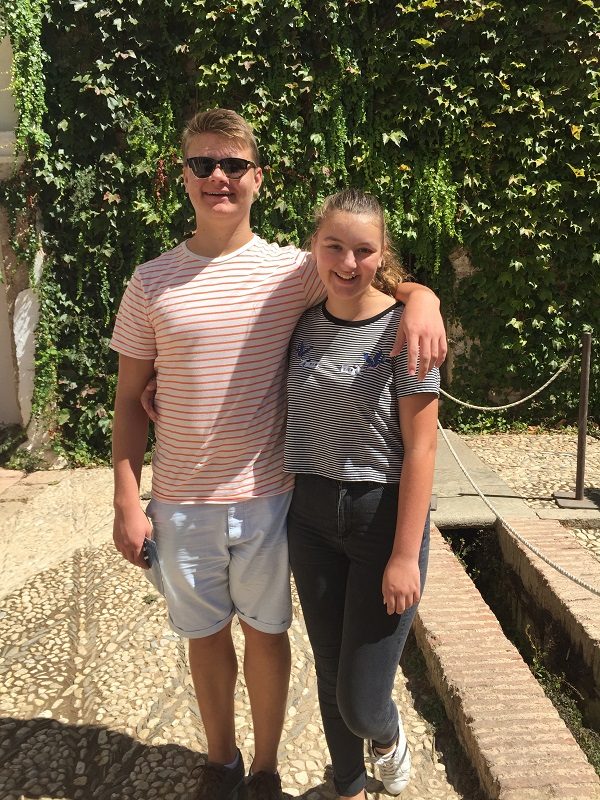 We will keep you posted with how it all turns out.

Well, Lars checked in regularly through the day and night.  He sent photos of the surroundings and the event and even called a couple of times.  In the end, we decided to let him stay out with his friends.  The thought was we would just do the 1 hour drive, each way, to pick him up.  Again, we surprised ourselves and let him hang out with friends all night on the beach.

He messaged at 7:15 am with a photo of his return bus ticket for 8:00 am.  I picked him up at our local bus station at 9:15 am and all is right with the world.  He had an amazing time, made lasting memories and enjoyed his friends from Spain and Ireland.  Apparently there were 2 big stages with different bands. and Coca-cola sponsored the event and gave out free Coca-cola.  Lars doesn’t really drink it, so he mainly stuck to water.  He said it was just like the festivals we’ve been to as a family, just minus his family.

I’m happy he’s home.  I’m happy we let him go and stretch his wings a bit.

Tell us your thoughts.  What would you do? What do you think?

We need your input:

Remember our Lars and Anya interview series our first 18 months living in Spain?  Well, some people have asked for an update from the kids.  I am not sure they will be willing to do it, but please let us know what questions you have for them.  I know someone recently asked how their English was doing, so comment below with your questions or email us and I will see if they would answer them on video.

It is ver easy to make your way around Europe using trains, planes and buses. There are several different options for each mode of transportation.  The best way to view all options is to check with Go Euro.  They will seek out the best way for you to get from one place to another and then you may filter, but fastest, cheapest, shortest, and so on.  You can look between the different modes of transportation and see which works best for your schedule.  Click the image to begin your search.