As you know, Lars loves to try new things, especially food.  Well, he has an entirely new world to choose from here in Thailand and he is just going nuts trying new things.  We have sampled many new fruits, but that was ease. Lars has now decided to attempt to eat some of the local creatures we are seeing on the streets.  Well, not on the streets, but in carts for sell on the streets of Bangkok.  He wants you to help him decide what to try.

Here in Asia they eat everything… Including insects. In the picture below there are 6 disgusting bugs/creatures. 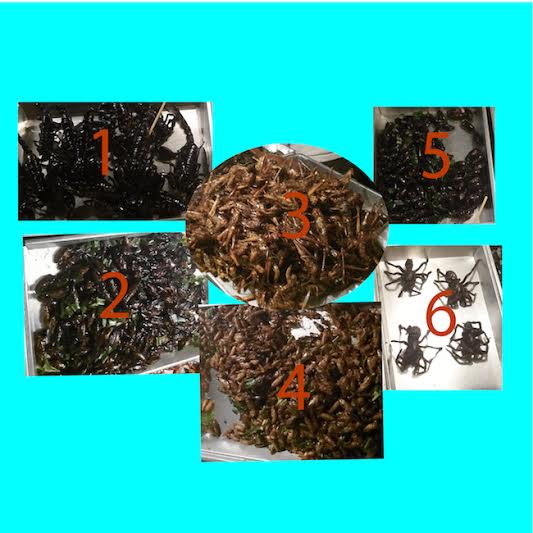 Vote for the creature you want Lars to eat.  The one with the most votes gets to be eaten by Lars. Just comment below with the number corresponding to the creature or the name of the creature you would like him to eat.   Example ” 3″ or grasshoppers.  The votes will end Wednesday 12 midnight Eastern Time.  Lars will also be gathering votes via other social media.  The creature with the most votes will be enjoyed on Thursday.  Shortly after, Lars will upload a picture with a link to the video in the description. Stay tuned!!!