Since we’ve lived in Spain, we’ve had a bunch of visitors.  Mothers, Uncles, Aunts, and even Cousins.  All of them wanted.  All of them welcome.  Yesterday though, we had a guest that was thoroughly unwanted.  I’ll give you the name in Spanish, and I will bet you’ll be able to translate…rata.  Yes, a rat! 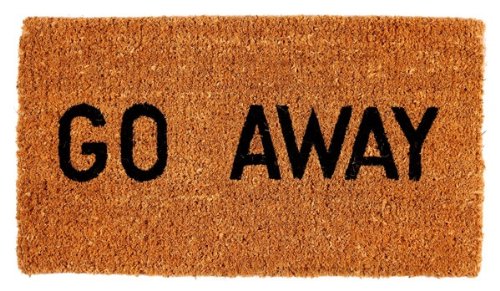 I bet you’re saying to yourself, “Ugh!  Eeeesh!  Ewww!”  Yes, it was bad.  Let me run down the particulars.  Now if you’re a P E T A person, you should probably stop reading now, because the net of the story is that I was not overly ethical when it came to my treatment of the rat.

This all began the day before.  I got up from the couch, and went into the kitchen, and something caught my eye as it ran/flew out of the kitchen.  I barely registered it, so I wasn’t sure if it was a rat or a bird.  I chose to believe that it was a bird.  I’m not rat-o-phobic, but it was just easier on my psyche to think that a bird just alighted from my kitchen.  When it’s warm, we keep the front door open, in order to get a nice cross-breeze, so it was able to fly fly away.

I looked in our laundry room for any sign, and then poked my head outside and didn’t see anything, so that reinforced my “It Must Have Been A Bird” Theory.  I didn’t think about it much until the following morning, when once again, I got up from the couch, went into the kitchen, and there he was again.  Definitely a rat!  Beady eyes, long thick tail, the works.  Only this time, he went into the kitchen, and not outside. 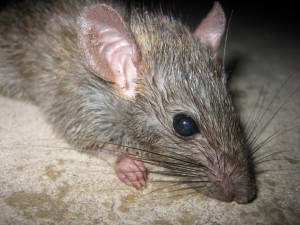 We didn’t stop to take a photo, so grabbed this one off the internet to give you the heebie jeebies too.

I grabbed a broom, and yelled out to Heidi to close the doors.  I wanted to keep the critter cornered in the kitchen so that it wouldn’t go into the main part of our apartment.  She closed the interior doors, and I made sure the front door was wide open.  My idea was to stun it, and then try to kill it outside.  Rats can carry some nasty diseases, so it was not my intention to let the little guy live.  Sorry, but with all of the kids and pets around the area, I didn’t want to take a chance.

Now the rat was in the corner, where I couldn’t see, hiding behind the trash can.  So I kicked the garbage can to give him a bit of a squeeze, and he didn’t like that so much, so he came out from behind, and it was GAME ON!  Now I would like to say that I wielded my broom with all of the skill of a samurai warrior, but that beastie was fast.  I succeeded in knocking him around a bit, but no significant blow was landed.

He got past me, and ran into the hall, and he was almost outside when I scored a direct hit, but it was with the bristles of the broom, so it only changed his mind, and bounced into the laundry room door.  The door wasn’t closed tightly, so when I swung the broom, it popped open the door, and my little guest was now in the laundry room.  CRAP!  I gave Heidi a bit of grief about not closing the door all the way, and then figured out the next course of action. 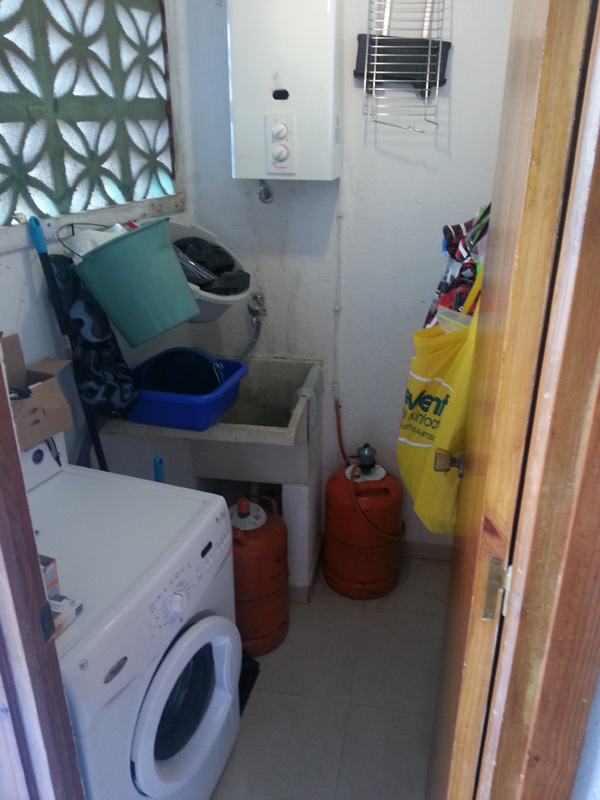 This is what our laundry room looks like now. It was much more cluttered before, with beach chairs and umbrellas.

Now that I’ve spent some time against my opponent, I can give a good description.  From nose to tail, he’s about a foot long.  Not the biggest rat I’ve ever seen, but he’s sizeable.  I figure that I will give him the option of leaving voluntarily, so I pour a bit of water on the floor outside the door, double-check the kitchen and bathroom doors are shut, and then close the door behind me as I walk into the family room.  The idea behind the water is that I’d be able to see his tracks to know if he had left or not.

After about 30 minutes, I was tired of waiting.  He obviously didn’t take the hint that he was an unwanted guest, and I didn’t see any tracks leading outside.  Crap!  I’ve got to remove all the stuff out of the room, and get him out of there.  If he’s alive, I want him out, and if he’s dead, I still want him out, so I grabbed another pole, and started poking around.

Side Note from Heidi: Alan asked me to help and I froze!  I hid on the other side of the closed door with feet up on the couch, just waiting for it all to be over.  I guess you know what animals I can’t deal with.

I should also explain that our laundry room is TINY.  It’s maybe 4 feet by 5 feet, and it has a lot of stuff in it.  It’s cramped in there, and I was not thrilled with the prospect of him jumping on/over/around me in such a confined space.  I am so not looking forward to pulling all this stuff out, so I start poking at things in order to try and scare him out.  Over and over, it was poke and listen.  Poke and listen.  I wasn’t hearing any movement at all.  Damn damn damn.

I’m thinking he went behind the washing machine (crap!), so I ask Heidi to get me a flashlight.  With the weakest flashlight that I’ve ever used in hand, I peek down the side…no rat.  I’m not about to look down the back, because I just know that he’s going to jump out at me, so I shove the washing machine closer to the wall hoping to hear a squeak.  Nothing.  At this point, I figure it’s time to start pulling everything out, with the tip of the broom pole to keep my distance, and I’m hoping that he’s passed out from fear in a corner.

Once again, I poke at the thing I want to move, and then move it.  I’m not hearing ANYTHING, so I’m wondering in the back of my mind if he somehow got by me and is already outside.  I have to make sure though, so I continue pulling stuff out.  I have everything out of the room except for some big beach umbrellas.  I’ve been really poking the umbrellas this whole time to no avail, so he just HAS to be behind the washing machine.  I edge it out a bit, and I hear something.  OK…he’s behind it.  Be strong, and get the stick ready.

Once again, I look behind the washer, and nothing.  I do see a sizeable port on the back of the washing machine, and I think, “Crap!  How do I explain to our landlord that we have a rat in the washing machine?”  As I’m thinking this, my little adversary climbs out from the umbrella peering at me from the fringed edge, and once again, I fly into action.  I’m flailing away at him, and he’s running around the sink and trying to get away from me when I score the blow that knocks him to the ground, and I follow up with another shot that sends him flipping/flopping on the ground.

Side Note from Heidi: The entire time I can see Alan’s silhouette through the glass interior door, along with a “stick” being raised and lowered.  With a little jumping around visible and loads of BANG, BAP, BANG noises and a bit of “*!@*#!” words, I wait patiently on the couch in the other room.

It’s over!  I am the victor.  My superior intelligence (don’t laugh) and brawn (I said don’t laugh) have proven more than a match for my rodent enemy.  Now I need to figure out how to get him out of the room.  I’m sure as hell not picking him up, so I wind up using the broken dustpan.  He’s a heavy sucker, and I put him in a box when I notice he’s still breathing.  Shoot!  I close the box, and put something heavy on it, and put the box in front of our apartment while I go to get a bag.

I didn’t get the bag, but when I picked up the box, and lifted the flap, he was no longer on his side.  The little sucker had recovered, and he was glaring at me with his beady eyes!  I dropped the box, and slammed the broom into it a bunch of times.  I heard the flopping again, and saw his tail jiggling around, and knew he was dead.  Whew!  With that I threw him, the broom, the box, and the dustpan in the garbage.

Now that the hard work was done, Heidi went into clean up mode.  I didn’t know that she likes rats even less than I do, and she felt bad for not helping me during the battle.  She cleaned up everything, and was a good sport about the whole thing.

Side Note from Heidi: Alan is my HERO!

Now let this be a lesson to all those who would visit us.  If you become an unwelcome guest, your days are numbered.

EPILOGUE:  They have been doing a bunch of road construction recently down the street from us, and we’re thinking that’s the reason we had a little visitor.  I’m also writing this post about an hour before bed, and I’m a bit freaked out.  Guess what I’m probably going to be dreaming about?

P.S.:  Given our audience, I know that some of you are going to comment and tell me that the term is musophobia or murophobia.  Yes, Juan, I’m talking about you.

17 thoughts on “What to do with an Unwanted Guest”