It’s been a few weeks, and I’ve been lazy.  Lazy in the sense that I’ve not shaved in a while, so it’s time for …Alan’s Shave Time.  It’s a working title, but it means I’m going to see about getting a shave in Hanoi! 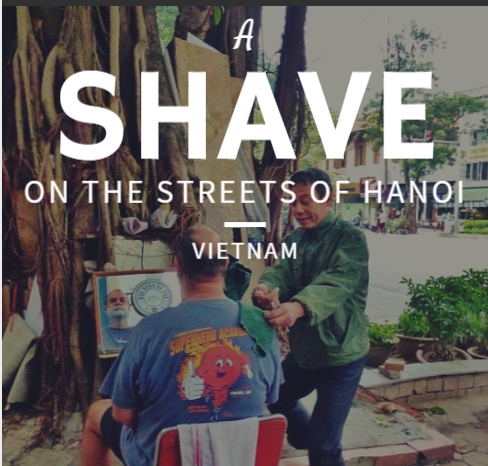 We’re walking around in the southeastern part of the Hoàn Kiếm Lake (where the French Quarter is located), and the traffic is much more manageable.  Where wide open streets, European buildings, a beautiful Opera House, and high-end hotels, restaurants and shops are found.  There are streetlights that drivers actually follow, there’s not much traffic and it just feels a bit more relaxing.  It’s pretty cool out (low 60s), and this will come into play later. 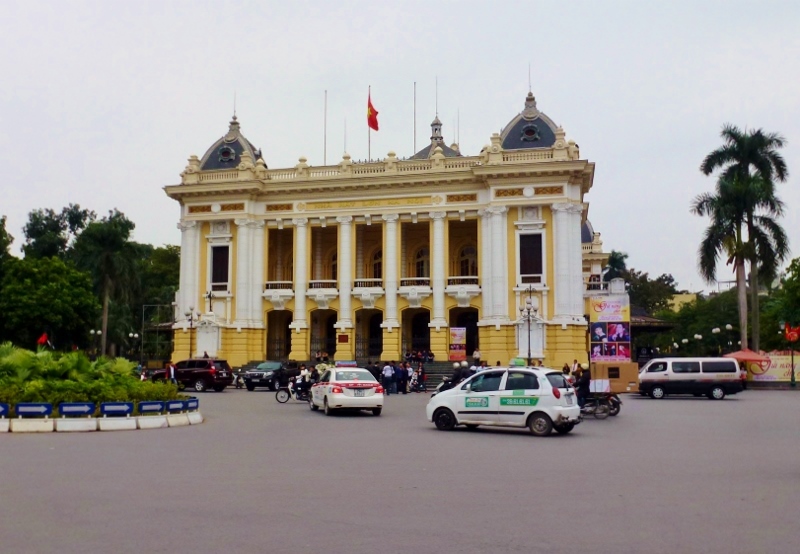 Feeling a bit peckish, I spot a cafe across the street.  As I’m crossing the street, there is a large tree on the sidewalk, and walks into the tree.  It looks like the guy is living in the middle of it.  What?!  I walk around to verify what I just saw, and sure enough there is a makeshift plywood door and a tall (for Vietnam), slender gentleman steps out.  It’s a Banyan tree, and there’s a large area in the middle that’s either been carved or cut out because there’s all sorts of conduit running up through the trunk.  Wild!

The guy sees my scruffy face, and offers to give me a shave.  Thinking that I’m in some strange reality/prank show, I’m looking around for hidden cameras.  I’m not seeing them, and the guy convinces me that he really does do shaves.  I see he has a mirror affixed to the tree trunk, and a foldable chair at the ready.  He then shows me his shaving accouterments.  Razor…check. Shaving cream…check.  Brand new razor blades…check. 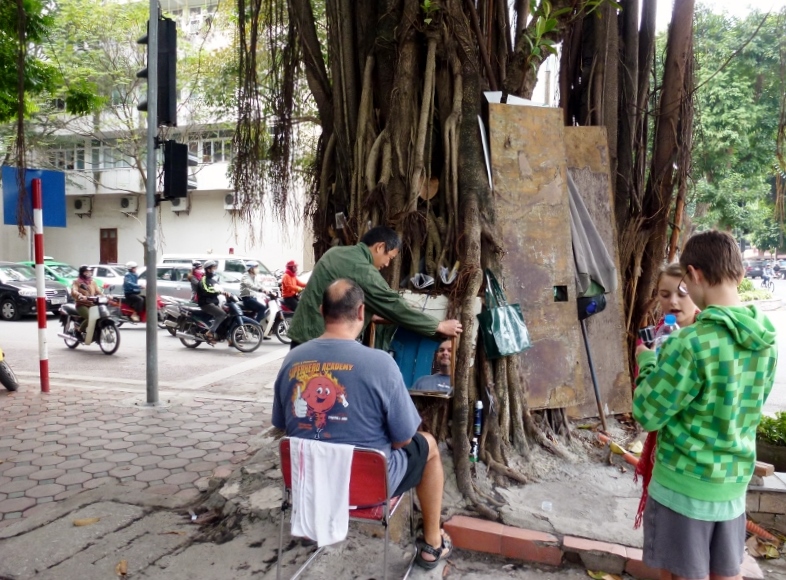 My Shave on the streets of Hanoi Vietnam, from the man who lives in a tree!

Wow. This guy is the real deal.  I’m still skeptical, so I ask Heidi what she thinks, and she says, “Go for it!”.  OK.  I’ve never had a shave on the streets of Hanoi or from a distant relative of a Keebler Elf, so what the hell!  Let’s do this!  I sit down, and the guy puts the obligatory towel on my shoulder, and breaks out one of his brand spanking new blades, and gets the razor ready.  It’s about this time I notice that unlike my last shave in Luang Prabang, there is no water.  I mean, why would there be?  Having a faucet attached to a tree would just be silly.

He does have some shaving cream, and he applies it all over my face.  This is pretty nice actually.  Granted, I’m sitting in front of a tree, and I’m the center of attention while traffic stops at the light.  What more could I ask for?  It turns out, a lot.  The first pass of the razor is taken, and it %&!$# hurts!  Remember when I told you that it was cool outside?  It turns out my face doesn’t like to get shaved when cold.  There’s no cold water much less hot, and that means I am in for a painful shave. 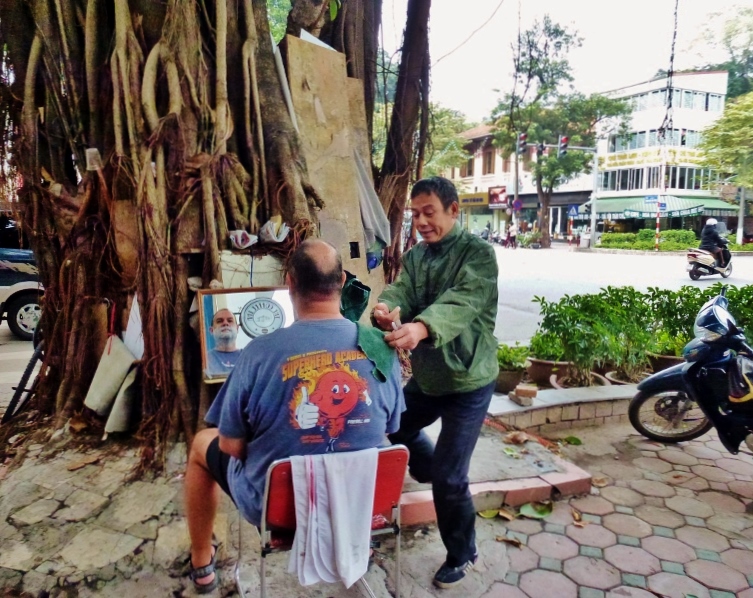 The sides of the face were not too bad, but the mustache area was seriously painful.  There were times when I just wanted to stop, but then I thought about how weird(er) I would look walking around half-shaved.  So I gritted my teeth, found my Happy Place, and managed to get through it.  Luckily, there were no cuts, but it still freaks me out having such a sharp blade close to my skin, sawing my beard off.

The shave was not without some interesting details.  He shaved my ears!  He pulled on the lobe, and shaved the perimeter of my ears!  Never had that done before!  He also kinda shaved my forehead. It wasn’t a methodical shave, but he definitely ran the blade around that area.  Another first!  He then cleaned up my neck (like they do when you get a haircut).  That was pretty cool. 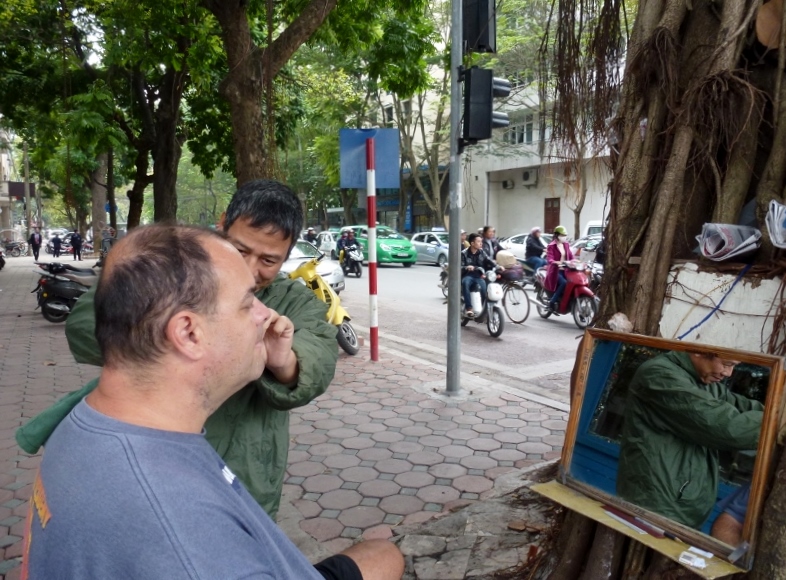 He then whipped out this pick thing that was about the length of a chopstick, and proceeded to tug on my ear.  It was clear that he was going to get rid of earwax (EWWW!), but there’s no way I was going to let him dig in my ears, so I stopped him and got up.  It turns out the ear thing is very common, as I saw many barbers doing it while we were in Hanoi. Not for these wax filled beauties!

An hour or so later (it probably just seemed that long), I was done.  Heidi gave me the thumbs up, paid the guy, and I we went to get some chow.  My face was sore for a good hour or so.  When we came out of the cafe, Shaver Man was giving a guy a haircut.  Go figure! 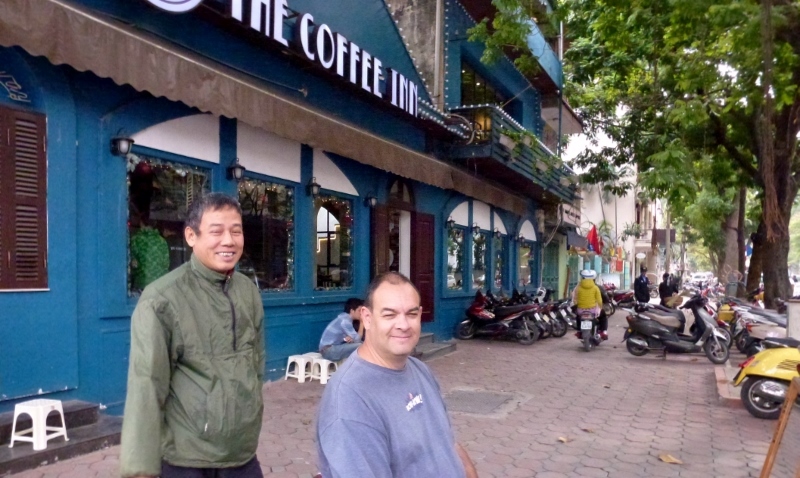 Now what have I learned?  I’m not doing any cold waterless shaves again!  Even though it was only 40,000 Kip ($2), it was just too painful.  So I will continue my quest for the perfect shave–on a budget.  Just like Caine wandering the U.S. in search of his brother.  That’s Caine, like in the TV show Kung Fu, not the biblical guy.

I almost hate to ask, but do you have any shaving horror stories?

2 thoughts on “A Shave On The Streets Of Hanoi Vietnam”