While this may seem like another Food post, it’s not…well, not exactly.  So take a look at this picture, and tell me what you see: 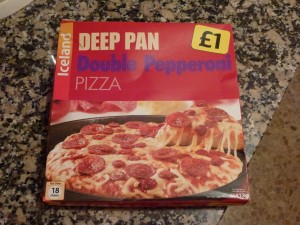 OK, so what did you notice first?  Good, you noticed the British Pound symbol.  That was pretty obvious.  What else?  It’s in English!  Hallelujah.

We’ve been buying food at Spanish stores.  And said food is Spanish.  And said food has preparation instructions in, you guessed it, Spanish.  So sometimes, I don’t really feel like having to open a Spanish/English dictionary just to cook some  food.

Back Story Alert:
An English acquaintance of ours (her daughter goes to the same school as Lars and Anya) told us about a magical store that has English food.  The name of this magical store?  Iceland.  While it’s not in the U.S., it is pretty popular in the U.K.  It was a store that Heidi and I went to quite a bit when we first moved to London many years ago.

It was a bit of a drive, but we decided to check it out.  What a kick in the pants.  It had a bunch of food that we used to buy, and it brought back a bunch of fond memories.  We bought a number of items like Chicken Kiev, the frozen pizza you saw above, and (Vienna Boys Choir “Aaaaaaaahhh”) Dr. Pepper.   If we were to add up the gas, the mileage we put on the car, and our time, it was probably a very expensive trip.  But it was worth it though.

So when I cooked that frozen pizza, do you know what I did?  I read the instructions.  And you know what?  I understood them.  I am surrounded by Spaniards, and a (forgiving) culture that’s telling me to assimilate.  My wife and kids are learning Spanish faster than I am, so this little battle is one I must fight from time to time.

“So how was the frozen pizza?” you ask.  It was god-awful, but that’s not the point.  The point is that in my small way, I am being careful to remain true to the core of who I am.  And that, is a Picky Eater.

1 thought on “A Piece of Home”