It’s tough to believe that 20 years ago, Heidi and I got married on Baker Beach in San Francisco.  20 years!  So obviously, this post is about our 20th wedding anniversary, and the amazing day that Heidi planned for us.  Long story short…it was awesome!

Our special days (birthdays, anniversaries, etc.) start off a bit slow.  If the kids are in school, we wait until they’re home from school before we start any sort of celebration.  Heidi and I wished each other a happy 20th wedding anniversary, and agreed that we would open the gifts once the kids got home.

Both of us had some additional planning on the presentation, so it worked out great.  Both the kids knew what I had planned for Heidi, and were excited about my gift for her.  I got her a ….  Sorry, you’ll have to wait for that part.

Once we got the kids home, the priority was to get them fed.  After a long-ish day at school, all that firing of synapses makes for hungry teenagers.

Sidenote about being a teenager:  In my above statement, I said teenagers; plural.  Technically, Anya is not a teenager.  Yet.  But in the interest of brevity I referred to her as one.  Why?  Well, she’s almost as tall as Heidi, and eats like a teenager.  So in case she reads this:  Anya, you are only a teenager for the purpose of this post.  Being called a teenager does not grant you any additional privileges or rights.

OK, where was I?  Oh yeah, the gifts.  With everyone fed, it was time to get to the gift giving.  I had purchased two bottles of wines for us.  One was a Rosado which is not a wine I would normally buy, but to be honest, I liked the bottle, and like most wines here, it was very inexpensive.  The other bottle of wine was a more serious red that was produced in 2012 (the year we moved to Spain!).  (We have yet to open that bad boy, but I’ll let you know how it tastes when we do.)

Heidi is crazy for chocolate (who isn’t?), so I got her some of her favorite chocolates.  And the pièce de résistance?  Hold on…I’m getting there.  First off, in case you didn’t know, the traditional gift for 20 years is fine china.  As I wrote to Heidi in her card, nothing says “I love you” like a dish that you need to wash and put away.  Besides, I’m not a traditional type of guy.

The modern gift for 20 years is platinum!  Now I love platinum, but it’s expensive, and a bit heavy.  And for my gift idea, I decided it would be too heavy to use.  So I went with something platinum-ish.  I wanted to get Heidi something that she would carry with her all the time (or a good chunk of time).  Here’s what I got: 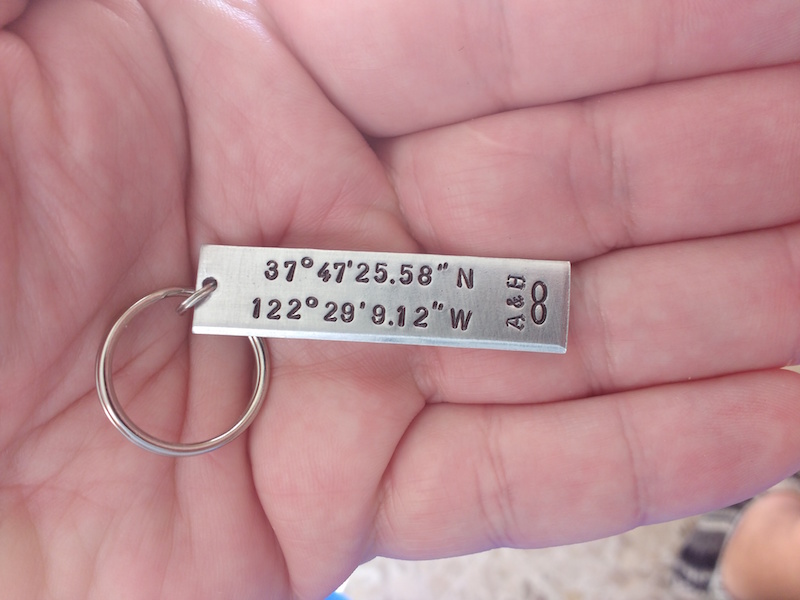 Now if you key in those coordinates in Google:

It will take you to the following map: 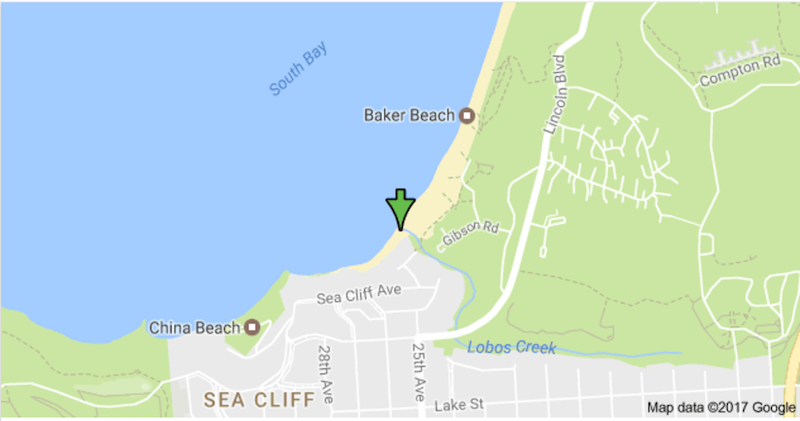 That is the exact location (as close as I can remember) where Heidi and I were married.  It’s something that she’ll keep with her car keys.  I also got a matching one for me too.

Heidi was pleased with her gifts, so now it was my turn.  She brought out a card, and in the card was a seek-and-find riddle.  We love this presentation style.  You gotta work to get that gift!  My first task was to decipher this:

“This should do for the moment, but they become real for you at 5.

Directions:  You must go to the top of the white cruise ship across from the playa.  There you will get a feel for the gift.  More to come so be on the lookout through the day.”

I’ll admit, I was stumped.  Luckily Heidi was a good sport, and helped me out.  She was not talking about a literal cruise ship, but a hotel that looks like a cruise ship:  Hotel Helios!

We drove there, and Heidi escorted me to top floor, and what awaited me was a massage at the spa!  Awesome!  For the next 45 minutes, Romana gave me a superb massage.  She practically had to pour me off the table when she was done. 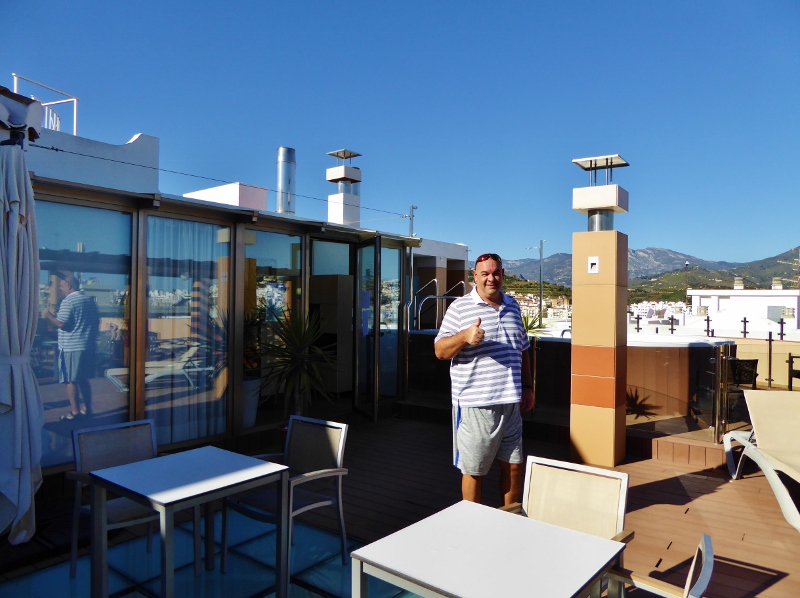 Had the gifts ended there, I would have been pleased, but Heidi had more surprises up her sleeve.

She booked a massage for herself, and I was instructed to pack an overnight bag with my toiletries, then come back and pick her up.  I was giddy at the thought of an overnight stay with Heidi, but then the reality rushed back into my mind, and I started thinking:

With my overnight bag packed, I went back to Hotel Helios to pick-up Heidi.  When I got there, she looked super relaxed after her massage.  I was then ready for the next part of my gift with another riddle clue..

Heidi got us a room at Hotel Helios!

Woo-hoo!  No driving, and…NO KIDS!  We were leaving Lars in charge, and the kids would stay by themselves.  Sweeeet!  A relaxing evening without the kids, but with my Sweetie! 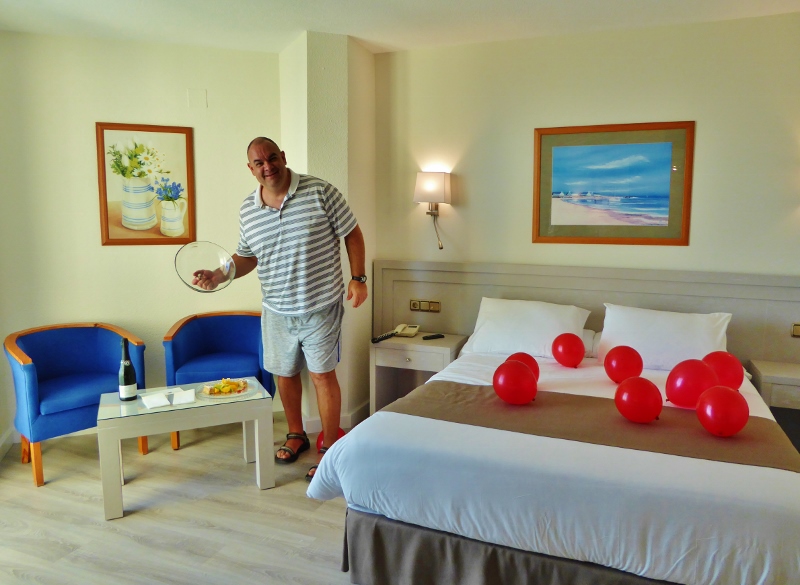 Inside the room, we were greeted with a very nice letter from the management congratulating us on our 20th anniversary, and they included a bottle of Cava (the Spanish equivalent of Champagne), and a very nice fruit tray.  Yum and yum!  Heidi had also purchased a bottle of Cava, so we had two bottles ready.

With Barry White playing in the background…Ha ha ha.  Just kidding.  It was almost sunset, so we took our two bottles of Cava, and headed to the rooftop of Hotel Helios which has an absolutely gorgeous view of the beach, and the sunset was just starting to do its thing. 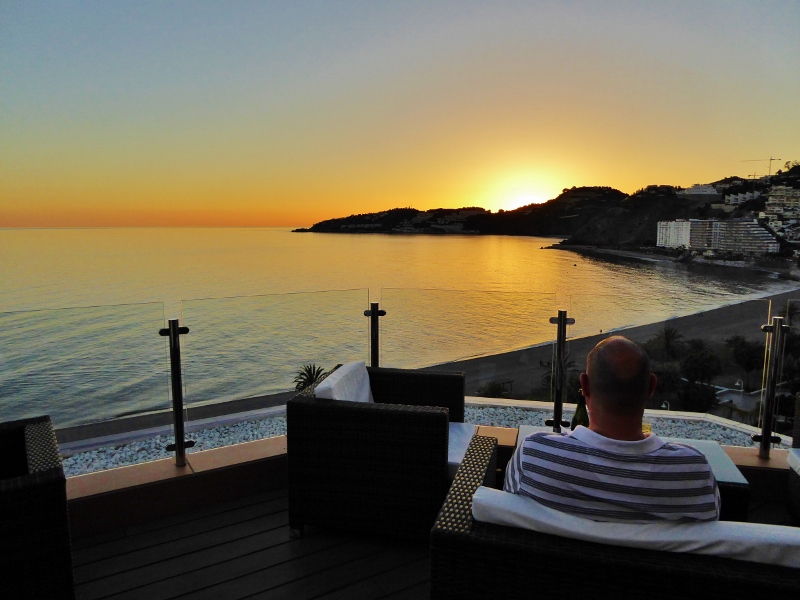 I poured some Cava, and we enjoyed the sea sounds and the sunset was amazing.  Cava is a great way to celebrate a 20th wedding anniversary!  Here’s the cool part:  we were able to “watch over” the kids from the rooftop balcony because we can see our apartment from the hotel.  Heidi’s pretty clever, huh? 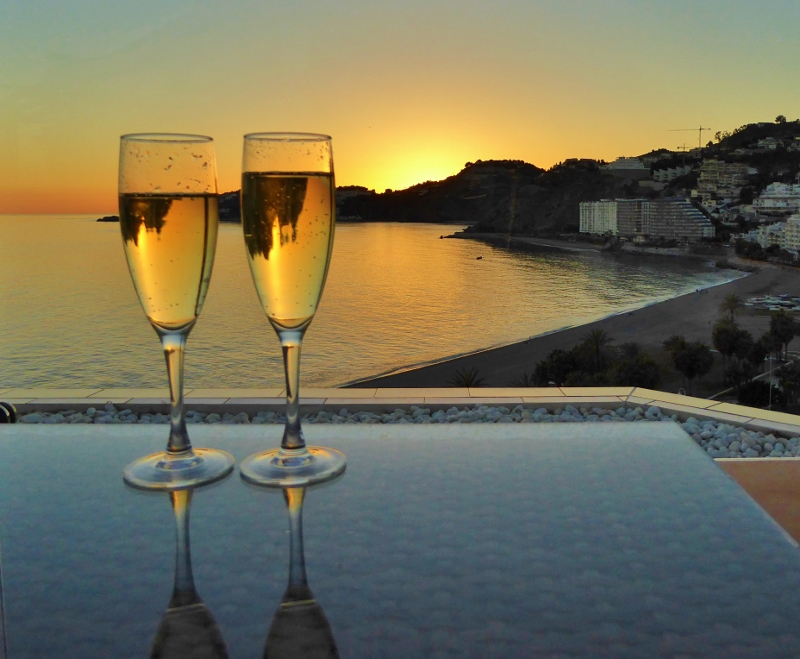 The last gift was a certificate for a meal, and it was my choice.  I opted for something simple.  I had polished off about 1.5 bottles of Cava, so I was a happy person.  But I was a happy person who needed some sustenance.  The great thing about the location of Hotel Helios is that it’s close to town and it’s easily walkable.  So 5 minutes later, we were ordering some shawarma to go, and then we were back at the hotel.

We woke up somewhat early the next morning.  Reality came back into focus as we had to pick up the kids, and drop them off at school.  I figured they had overslept, but was pleasantly surprised when both kids were up and around and getting ready for school.

After I dropped the kids off, I went back to the hotel room, and by that time, I was ready to eat.  Heidi was similarly famished, so we decided to hit the breakfast at the hotel.  Before I get into the specifics, I will say that here in Spain, breakfast is a very light meal.  The typical breakfast buffets we’ve been to normally don’t have a large selection of food, and there’s not much in the way of warm food. 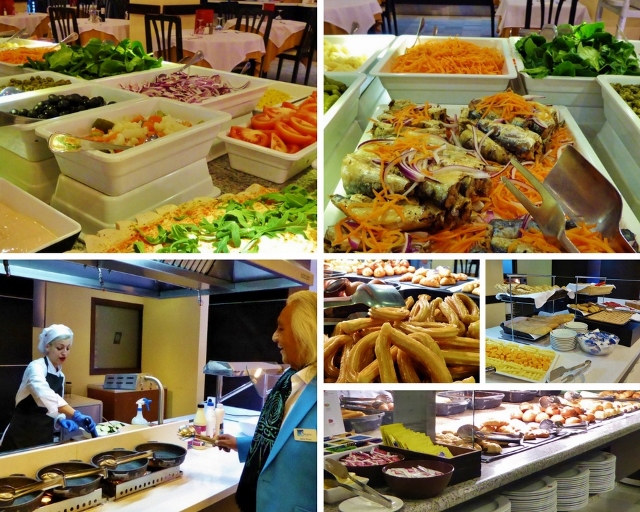 But that’s definitely not the case at Hotel Helios.  They have a huge selection of food geared towards a varied audience.  There was plenty of fruit, fresh meats, breads, beverages, and they even had hot food.  I had seconds on the bacon and pancakes, and they even had a chef cooking eggs.  It was quite a spread.  Their staff was very friendly and helpful, and made sure we were taken care of.  Diana was our server and she made us feel like we were a welcomed guest in her home, it helped that our sons had played sports together.

After a fantastic meal, we were able to relax for awhile back in the room, and then (sniff sniff), it was time to checkout.  Ahh well, we had a fantastic time, and I have to say Heidi did an amazing job of planning our mini-staycation, and the staff at Hotel Helios made sure our 20th wedding anniversary was a memorable experience.

Check out our video of Hotel Helios!

Here are more creative ways to give gifts to make them special. 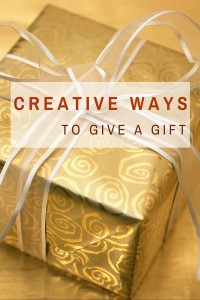 Do you like to give gifts in a unique or fun way?  Tell us about it.

3 thoughts on “How To Spend Your 20th Wedding Anniversary”